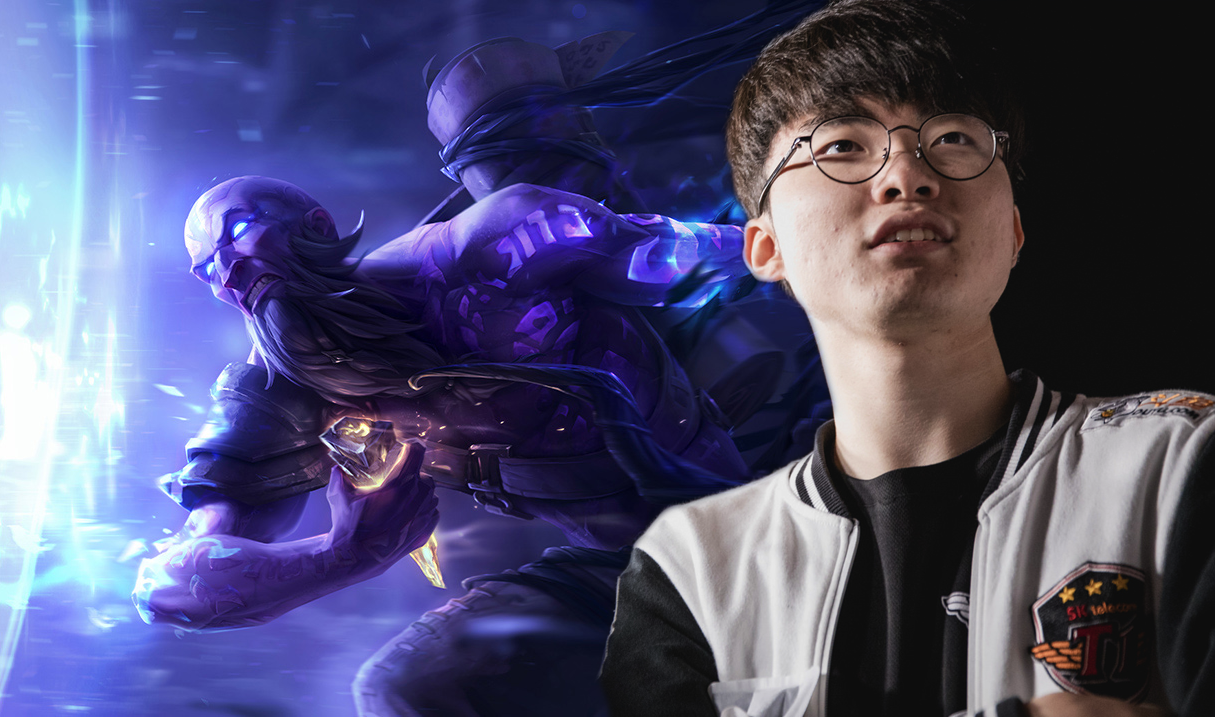 Photo and Image via Riot Games | Remix by Aaron Mickunas

SK Telecom T1’s Lee “Faker” Sang-hyeok, the Unkillable Demon King, broke out his renowned Ryze against Misfits Gaming in the quarterfinals at Worlds last week. He won the game with an astounding six kills and one death, tallying up yet another Ryze win to his Worlds scrapbook.

Faker’s Ryze is nothing short of legendary. When he locks it in, you know he means business, and the odds aren’t exactly in favor of his opponents. In fact, he’s never lost a Ryze game at Worlds in his entire career.

For the 2015 World Championship, he played Ryze mid five times without losing, and then played it once more in 2016. So far at Worlds 2017, he’s only played Ryze once, but it worked so well we’d be surprised if he didn’t lock him in a couple more times by the time Worlds is over.

Ryze is a difficult champion to master both professionally and in solo queue. At this Worlds alone, Ryze has only won 10 of the 27 games he’s been played in, and his solo queue winrate currently sits at 42 percent, according to League of Legends stats site Champion.gg. That’s the lowest mid lane winrate in the game. So how does Faker always seem to pull him off?

Well, because he’s Faker, for starters. You don’t earn the title of best player in the world without being able to work things out that no other player can. Mostly, though, it’s his ultimate ability. Ryze’s ability combo is fairly simple, with only a few variations depending on the situation. It’s his ultimate ability that trips most players up.

Usually, players will save the ult for a big play, like moving an entire team into flanking position or to sneakily secure an objective behind vision. What Faker does differently, though, is that he uses it liberally, in almost every fight, to navigate the battle field and set himself up in better positions, even if those positions aren’t far away from where he was just standing.

Ryze is a great pick into the likes of Lucian and LeBlanc due to his ability to lock them down with point-and-click crowd control. His passive shield can also come in clutch against burst champions with cooldown windows in between bursts like Corki and Taliyah. He can absorb most of their burst with a well timed shield and then beat on them with his spammable combo while their big abilities are on cooldown.

Royal Never Give Up’s mid laner, Li “Xiaohu” Yuan Hao, does often play Corki. He played Corki five times during the LPL Summer Split, and never once lost. He even played it last week against Fnatic in the quarterfinals, so we may see more Ryze picks in the semifinals to counter it.

Faker and the rest of SKT will face off against RNG this Saturday at 3:30am ET/3:30pm CT.