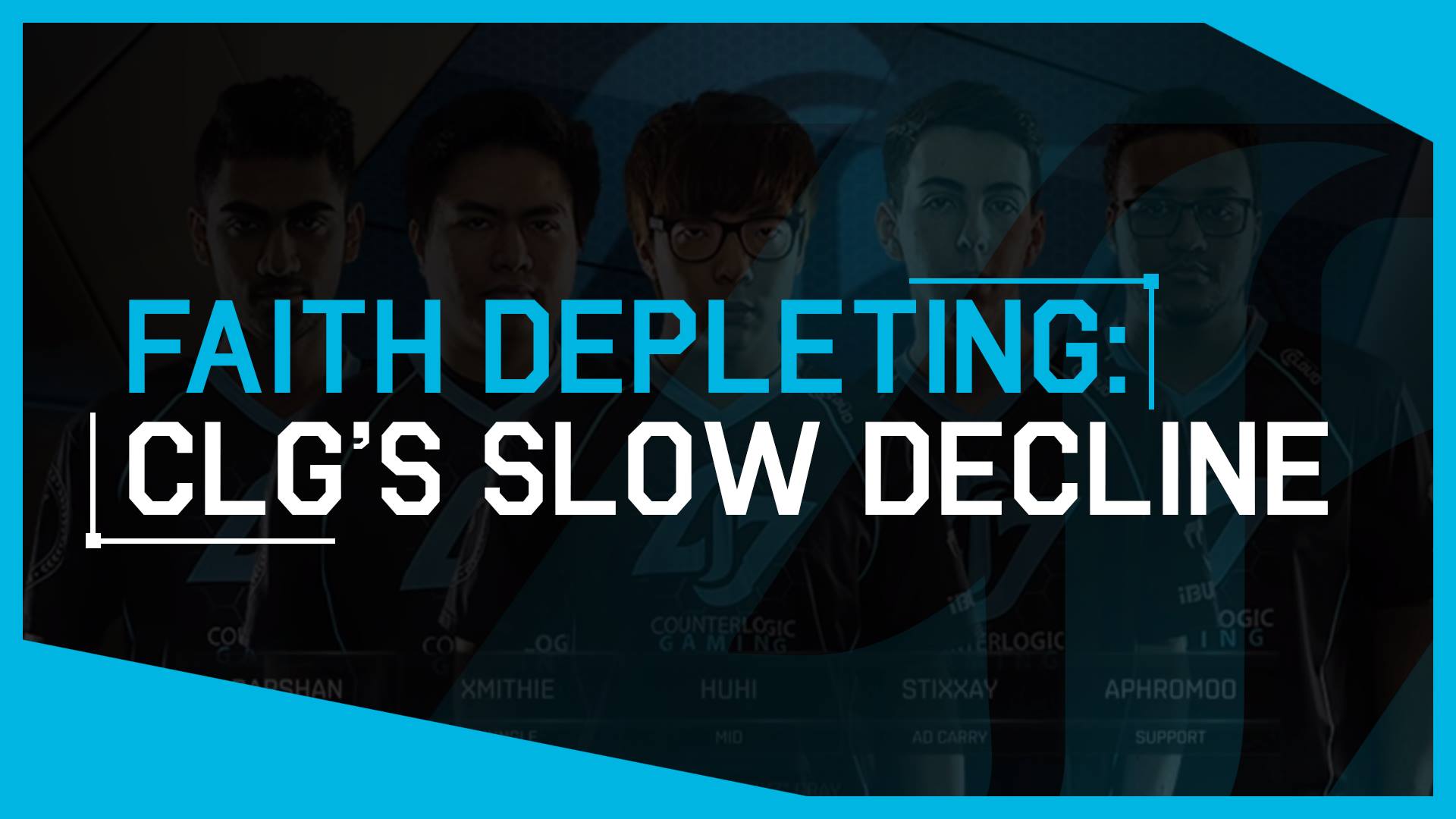 We are all too familiar with the story of the underdog. We’ve seen more than our fair share of Luke Skywalkers and Frodo Baggins. Yet, our affection for it never wanes. We enjoy seeing someone accomplish more with less–to see the long standing champion uprooted. The unexpected will always capture our imaginations more than the predicted outcome.

But we rarely see what happens next. The credits role or the last chapter ends as the victory celebration is still going.

In life, such a cut off point does not exist. There is always the next tournament, the next big struggle, the next day. The underdog is tasked with repeating its performance as the reigning champion.

As the North American League of Legends Championship Series (NA LCS) champion from summer 2015, Counter Logic Gaming didn’t look to live up to that reputation the next split. After it parted ways with two of its best players, Eugene “Pobelter” Park and Yiliang “Doublelift” Peng, and replaced them with rookies, CLG looked like a team that would struggle in the middle of the pack, and soured fans or haters of the team criticised the “counter logic” of the decision.

That didn’t happen. Instead, CLG finished the split in second place and won the playoffs after two scrappy best-of-five series against Team Liquid and Team SoloMid. With those victories, the team qualified for the Mid Seasonal Invitational as NA’s representative. Still, naysayers hung their heads: “it should have been TSM. It should have been Immortals.” The sentiment was that CLG did not have the same ceiling as rosters with some of the best talent in NA.

Then CLG finished second in the MSI groups, and then second overall in the tournament. The roster that no one besides the most ardent of fans believed in had the best performance an NA team has ever had at a legitimately stacked international competition. Of course, one could point out that Europe’s G2 Esports’s lack of preparation and SK Telecom’s startling slump during the group stages allowed CLG to secure a favorable seed for playoffs. If CLG had met Royal Never Give Up or SKT in the semifinals, the team likely wouldn’t have advanced any further. But that sentiment would likely have been dismissed as the ramblings of a salty hater.

As time has gone on, however, CLG’s accomplishments in 2016 are looking more like the perfect alignment of the stars rather than the start of a CLG era no-one anticipated. One of the few teams in NA not to undergo roster changes in the summer, CLG has tried to continue on as usual. So far the team has a 2-5 series record and a 9th place seeding to show for it.

Critics could point to CLG’s roster and say it lacks a true star outside of Zaqueri “Aphromoo” Black. While Darshan “Darshan” Upadhyaya has shown he is a strong player in NA over the past three years, he does not compete with the best international competition, and the same could be said for the reliable Jake “Xmithie” Puchero. Meanwhile, Trevor “Stixxay” Hayes and Choi “Huhi” Jae-hyun, the newer players, were unknowns up until last split. Now, we understand them fairly well: Stixxay is a good cleanup AD carry that requires assistance in the laning phase and benefits greatly when his team can produce a massive frontline for him to freely auto. Huhi, on the other hand, is an underwhelming mid laner that has been compensated for within a well designed system.

Yet, this squad bested teams with greater talent than it. CLG’s teamwork, based around covering each other’s weaknesses with another’s strengths, triumphed over star power. Now the roster that had surpassed all expectations is struggling to meet any. CLG has only managed to defeat an underwhelming Echo Fox and a Team Liquid struggling with internal issues. Against TSM, Immortals, and C9 at the top of the bracket, CLG was definitively beaten.

It’s a drop off in results I thought must have been a result of some mirroring decline in performance, but as I combed through statistics on Oracle’s Elixir, I was surprised to find that many metrics between the last split and now were nearly identical. There is little variance between the amount of wards CLG placed and cleared from last season. There is no radical shift in gold investment. This is still the team that won NA LCS.

There are, however,  two differences in performance. First is that CLG is not winning the early game as well as last split. CS differentials are down from last ssplit, and the team’s gold advantage at 15 minutes has dropped from 806 to 112. This is namely because its lane swapping hasn’t been as vastly superior as it once was, and the weaker laning phases of its mid and duo lane is becoming more of an issue.

The other change is Stixxay’s damage. He dropped from averaging 629 damage to enemy champions per minute, to just 563. His damage share declined as well, slipping from 33 percent to 28 percent. That is barely a percent ahead of Huhi, who he well eclipsed last split.

The simple conclusion would be that Stixxay is underperforming, but there is a nuance to it. It’s not that he’s gotten worse–it’s that the current meta is difficult for his style to succeed in. Stixxay thrives on longer range ADCs, like Caitlyn or Tristana, or mobile ones such as Kalista and Lucian, to kite out fights while his team creates zones for him to freely attack in. When he’s placed on immobile picks like Ashe or Sivir–picks he has zero wins on professionally–for utility, he is not playing to the style he was successful with. Unfortunately, that is a large part of what the current meta demands of ADCs. This, along with the rise of ranged supports, leads to his laning phase being compromised as he cannot solely rely on Aphromoo’s Bard to persevere. He needs jungle attention, but Xmithie is concentrated on getting Darshan ahead so he can split push on the likes of Jax and Irelia.

Still, this would not be that much of an issue were it not for Huhi. Across the board, whether it is advantages in CS or damage, Huhi is found as one of the worst scoring mid laners. Lacking control of his lane, he is behind in items and rotations. The wide competitive pool of mid lane champions takes away the safety net he had with Azir, and leaves him open to a variety of counterpicks. All of this accumulates to him having the lowest kill participation of all mid laners in North America. Were he to have more control of that lane, CLG could look to double teleport to the bot lane and assist Stixxay, or at least have Huhi roam. Currently, those options are not reliable because of Huhi’s absence of pressure. Xmithie could gank for him, like the first game against Immortals, but that is a short term fix that could easily be punished if it were developed into a habit.

In all honesty, CLG should start looking for a new mid laner.

Teamwork may have gotten CLG through to MSI, but that is an element of play that a team can learn. We now see what happens when a team of star talent finally figures out how to play together with a cohesive identity in TSM. CLG was able to do more with less, but it is becoming increasingly apparent how rare it is for lightning to strike the same place twice.

Statistics collected prior to Week 4 of NA LCS