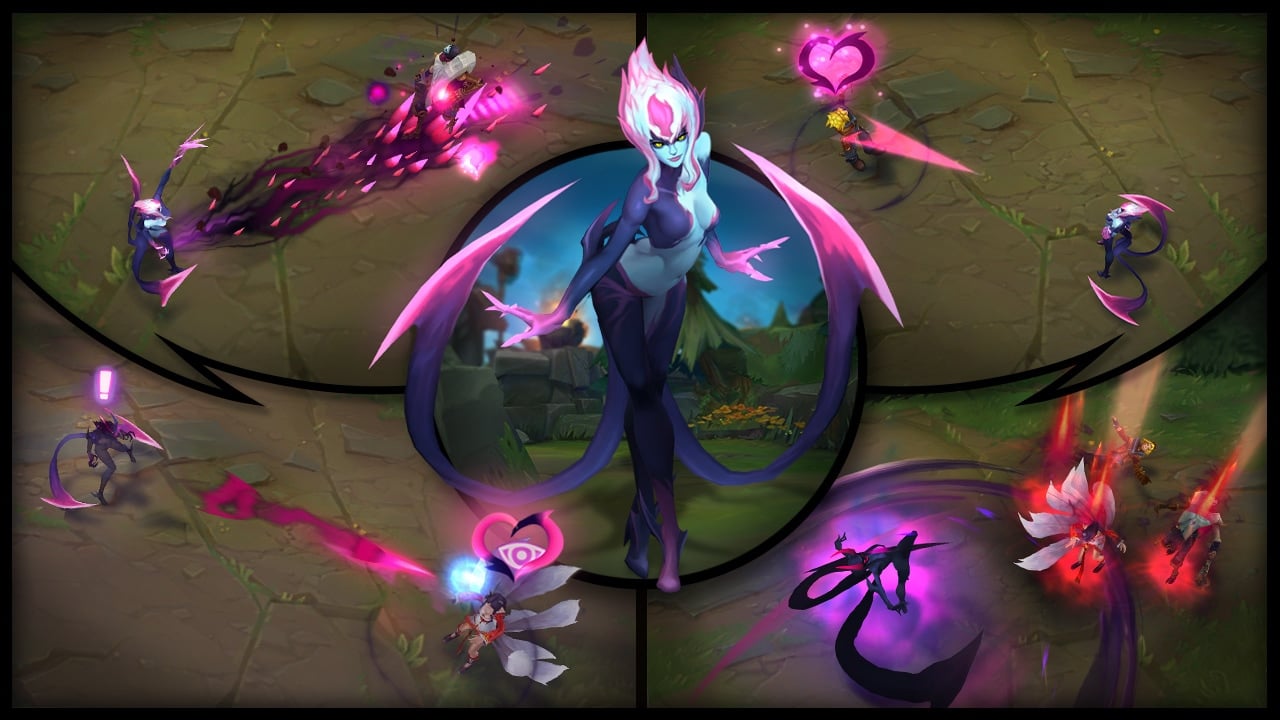 Evelynn’s saucy rework was loaded onto the PBE for the world to see today, and with it, Riot has revealed her official champion update page. Her new abilities have been outlined for the first time since she was teased last week, and she looks like a ton of fun.

Riot has gone all-in on the succubus theme this time around, and her new kit is complete with whips, spikes, charms, and a whole lot of kink. Most of her abilities have more than one function, turning the once braindead champion into an innovative new jungler with a high skill ceiling and rewarding gameplay when mastered.

After avoiding combat for a few seconds, Eve enters into her Demon Shade form. This form doesn’t grant her camouflage until she hits level six. It grants her bonus health regen and empowers her abilities to deal more damage and more special effects. That means the use for her passive at early levels will be to proc her abilities’ bonuses and boost her camp clear with the health regen. After she hits six, the annoying invisible ganks are back.

Evelynn’s new Hate Spikes involve a little bit more than just mashing Q for a few seconds when you enter combat, but only barely. Now, it starts out as a skill shot. When she lashes out in a straight line, if the lash hits an enemy, her next three spells or attacks will deal bonus damage. After landing the initial lash, she can reactivate her Q three times to fire lines of spikes at the target she is currently attacking, which plays very similarly to her old Q.

Apart from sounding really dirty, Lust Dust is Eve’s primary tool for ganking. It’s a point and click ability that causes the victim to be cursed. If Eve hits the cursed target with spells or basic attacks, the curse will be expunged and the target will be slowed by quite a lot. If she waits a few seconds before attacking the cursed target, expunging it will charm the target as well.

Evelynn whips a target with her lashes, applying on-hit effects and dealing a chunk of the target’s maximum health. It also grants her a rather large movement speed boost. When Eve enters Demon Shade form, her next Whiplash is empowered, causing it to drag Eve to the target before impaling them, dealing damage and effects to all champions near the victim as well.

Evelynn’s ultimate turns her invulnerable for a few seconds and decimates enemies in a sweeping cone in front of her, dealing extra damage to low-health enemies. Evelynn then teleports backwards a large distance, making this the perfect getaway and tower-diving tool.

With her new kit up for testing on the PBE today, it’s likely her rework will go live with Patch 7.20 in just a couple of weeks.