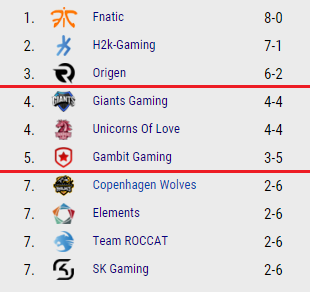 At the half way point of the season we’ve seen some of the biggest highs and lowest lows with the standings indicating the clear split we’ve seen in team strength. As it looks so far, the top three consist of Fnatic, who look to match or even exceed their LCS win streak record, H2k and Origen.

The second group holding Giants, who capitalised on the sloppiness of the bottom teams, Unicorns of Love, who look just as inconsistent as before, and the newly surfaced Gambit, the best of the original bottom five.

Lastly, the unlucky boys on 2-6 at the bottom, all with the talent and the capability to be higher but all unable to find the right groove.

I feel like both these teams really should have better records and have been hard done by mitigating circumstances: The wolves with the whole Dentist/Deficio fiasco and Roccat taking it in turns between each other to throw games.

Regardless, both teams have had time to work on their atmosphere and gameplay and both have received a new player. Neither deserve to be automatically relegated but both need to pick up this win to avoid such an event which only becomes more likely with each loss.

The additions of MrRallez and Shook respectively will turn out to be great for both teams if they can get it together quickly, adjustment time isn’t a luxury with only half the season left.

Remember how hyped up everyone was for a clash between the first and second place teams in the EU LCS? What if I told you that it was happening again, but this time it’s H2k’s turn to take a swing at the highflying Fnatic.

Honestly this game is oozing with quality, I’m honestly excited to see if Fnatic will come into this game with a style of play closer to H2k’s methodical strategy or try to upset the flow with a more chaotic approach. I’m hyped up for the potential laning phase of Hjarnan and KaSing vs Rekkles and Yellowstar. I’d love to see how Odoamne and Loulex handle Huni and Reignover. Who doesn’t want to watch Ryu go head to head with Febiven?

The potential for this game is crazy, but if NA has taught me anything, it’s that all potential can very easily go full counter logic. This game could turn out the way H2k’s match against Origen did in week one. However, I have faith in a good, well contested game similar to the thriller that Fnatic vs Origen was last week.

Are the Giants slowing down after their initial burst? I have to give it to the squad, they’ve sustained their initial acceleration much better than they did last split. However they’ve showed signs of decline last week and a real problem could arise if they falter here against an Elements side that’s had a permanent identity crisis ever since actually becoming “Elements”.

Alternatively, an even bigger problem could arise for Froggen’s squad if they don’t start picking up more wins as soon as possible. After a split and a half of mediocrity it’s not far-fetched to imagine one of EU’s classic mid lane stars catching that auto relegation spot in four weeks’ time.

Its put up or shut up for both teams,

Elements are all but out of contention for worlds, what they need to care about is keeping their LCS jobs. Giants also need to stem a focus on ensuring they cement their LCS spot for next season as it’s still possible for them to slide right back to the bottom of the table if they get sloppy now.

Prediction: I will never trust Elements again, so Giants.

Origen have taken two blows to their flying start in two successive weeks, meanwhile Gambit have been improving as time goes on. If Origen aren’t sufficiently prepared for this game I can see them losing grip of the game if things go south for them early on. Gambit has significantly improved and has the potential to be a dangerous team come the late points of the season.