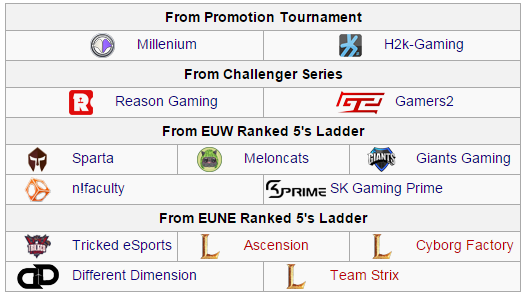 Riot announced it was increasing the number of teams in the LCS from eight to ten, meaning two teams had to prove themselves LCS worthy. Enter: the Expansion Tournament. Teams competing are either from the top of the ranked 5’s ladder, Promotion Tournament or Challanger Series Playoffs. Thus teams are presented with an exciting opportunity to go straight from the ladder, to the LCS, in one swift tournament – amateur to professional, in a handful of weeks.

Stakes are very high, and discrepancy between teams is huge. This is the tournament of potential upsets, with professional and ex-LCS teams, such as Millenium, competing alongside ladder hopefuls, Meloncats. Millenium are essentially a “household name” to eSports fans, so it will come as no surprise they have a roster of experienced players, strong infrastructure, with coaches and managers, as well as enough financial backing to import 2 professional Korean players. Whereas Meloncats, after qualifying through the ranked ladder, have recently lost their toplaner, Olof “Flaxxish” Medin, in a competition ruling. Olof “Flaxxish” Medin was heavily toxic in solo-queue mostly being reported for offensive language, negative attitude and verbal abuse, resulting in suspension from the Expansion Tournament as well as the 2015 Spring Split.

Millenium are favourites, and despite a few hurdles, it would be very surprising for them not to be back in the LCS.  Although they finished last in the 2014 EU LCS Spring split, Millenium really picked up the slack for the Summer Split. For the first six weeks Millenium proved themselves to be a very consistent team; finishing week six with an overall 8 – 6 score and occupying 3rd place, which was an impressive turnaround from the weakest team in the Spring Split. Kerp also picked up weekly MVP twice in this time. However the team started to slump and ended up finishing 6th meaning they had to contend against a top Challenger Series team in order to win back their LCS spot. Unicorns of Love were to be their opponents, and everything started off well; Millenium took the first two games of the best of five series. But then, as if it is some kind of Millenium curse to start off strong and then throw it all away, Unicorns of Love won 3 straight games thus knocking Millenium out of the LCS.

The pre-season roster changing mania left no stone unturned, and Millenium were not exempt. Midlaner Kerp and jungler Kottenx both left, to be replaced with Korean’s, Ryu and H0R0 respectively. The former may be infamously remembered as the antagonist in Faker’s insane Zed play. Both Ryu and H0r0 have played at the top competitive level in Korea. Completing the line-up we have Kev1n in the toplane, Creaton ad carry and Jree as support. This leaves Millenium with an incredible stacked roster, full of players with the competitive experience and the mechanical skill to overcome any team in their path. I rank Millenium the strongest threat in this tournament and look forward to seeing them in the LCS next year.

With two available spots, which team should be joining Millenium? H2k-Gaming previously won the 2014 EU CS Summer playoffs, taking first place from SK Gaming Prime and claiming the title of best Challenger Series team. They have a very strong roster, with toplaner Odoamne and midlaner Febiven impressing eSports fans. Alongside being a strong contender, they have been gifted a comfortable path to LCS. Being placed in Group B means they will either face Meloncats or Cyborg Factory. Both teams pose no threat, especially duo to Meloncats weakened chances with the suspension of Flaxxish. Winning Group B means they will face off against the winner of Group C.

Now queue the potential upsets. Milenium and H2k should both win groups A and B. Meaning they advance through to the Bracket Stage as Team A and B respectively. Millenium will face the winner of Group D, and H2k, the winner of Group C. Reason Gaming appear to be the strongest team in Group D, with their recently acquired ex-LCS players, Kubon and Celaver, the team consists of players all with experience and a common theme; Polish, never under-estimate an all Polish roster. Roccat taught us this last year when they smashed favourites Ninjas in Pyjamas in the Season 4 Spring promotion tournament. Reason Gaming is a dark horse in the truest sense. SK Prime and SPARTA also are competing to win group D. This without doubt makes Group D a very tough group to advance from.

Group C is easy to predict. Gamers2 should be all means emerge from this group victorious. They have a strong all round roster, with lots of experience playing together. ocelote may not be the hard carrying midlaner a team like this would excel with, but ignoring his shortcomings, k0u is an exceptional jungler and Jwaow is a very talented toplaner.

This means if my predictions are correct the Bracket Stage should look like:

Stay tuned for part two in which I analyse the teams that have advanced to the Bracket Stage.

The EU Expansion Tournament is set to take place on 22/11/14 at 15:00 CET, with Reason Gaming facing SK Prime. Followed by Ascension vs GIANTS and Gamers2 vs Team Strix. All games will be a best of 3.