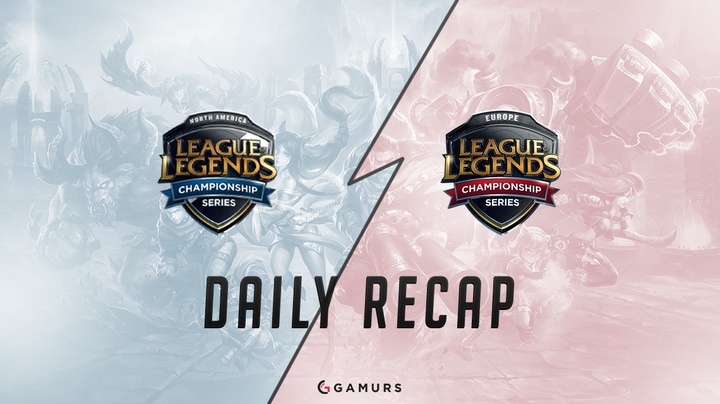 From H2k-Gaming having a flawless game against FC Schalke 04 to Team SoloMid staying undefeated, here is how Day 1, Week 6 went down:

(6-3-3) Fnatic 2-0 Team Vitality (2-6-4)
Game 1: The first match started out close, even going in Vitality’s favor up until 24 minutes. Thanks to a favorable teamfight for Fnatic that led to three kills and a Dragon, the lead switched places and Fnatic never let up from there. The best performance of the game came from Fnatic’s bot-lane duo of AD Carry Martin “Rekkles” Larsson (6/1/5 as Lucian) and support Bora “YellOwStaR” Kim (0/0/12 as Nami).

Game 2: Fnatic played off of the momentum from the first game and took an easy win here. For Vitality, it was all about trying to stop the Fnatic train, but Vitality fell short of being able to do so thanks to the jungle pressure by Fnatic’s jungler Lee “Spirit” Da-yoon, who went 3/1/10 as Rek’Sai.

Game 1: UOL found themselves taking an early lead and never letting up against Origen. UOL fed their ADC, Kim “Veritas” Kyoung-min (9/3/7 a Ashe), and never looked back thanks to her massive damage potential when fed.

Game 2: The second game was much closer, but Origen still was unable to find a win here. The team kills were 15-12 in favor of UOL, who had a 9k gold lead 31-minutes in. Origen took Baron and began a comeback, but eventually fell short due to failing to capture objectives.

Game 1: The first match was not close, as shown by the team kill which went 15-6 in favor of Splyce. The entire team saw great performances, but the best one came from mid laner Chres “Sencux” Laursen, who went 7/1/6 as Kassadin. The off-meta pick did not keep Sencux from massacring ROCCAT, so this could mean more off-meta picks in the near future for the EU LCS.

Game 2: Splyce top laner Martin “Wunder” Hansen decided to follow the footsteps of Secux and choose an off-meta champion. Choosing Taliyah, Wunder did not disappoint by going 10/5/5 as League of Legends newest champion. The entire Splyce team played around the top lane focus and were able to take respective lane leads and eventually win the game.

Game 1: Giants came out strong to take down the EU LCS Champions in the first game. Aggressive laning and strong jungle pressure allowed Giants to focus objectives, which then led to an easy win. The best performance of the game came from Giants mid laner Na “NighT”  Gun-woo, who went 5/1/5 as Vladmir.

Game 2: In the second game, G2 exploded to say the least. Each player of G2 dropped at least 10 assists, except for ADC Jesper “Zven” Svenningsen, who went 15/1/5 as Jhin. In essence, this was a 32-minute slaughter of Giants, who could only get a few kills here and there compared to G2.

Game 1: The first match saw three gold lead changes – S04 to H2k and back, but H2k ended up with the win thanks to a quadra kill from jungler Marcin “Jankos” Jankowski, who went 6/3/9 as Hecarim.

Game 2: H2k rode the momentum from the first game, and ended up not giving up a single kill in the 26-minute game. The top performances came from H2k’s bot lane duo of ADC Aleš “Freeze” Kněžínek (6/0/3 as Caitlyn) and support Oskar “Vander” Bogdan (1/0/8 as Bard).

Game 1: The first game started out close, but TSM started to take over lanes thanks to jungle pressure from jungler Dennis “Dennis Johnsen “Svenskeren”Johnsen, who went 0/2/10 as Nidalee. The game got out of hand for C9 as TSM took objectives while C9 was still trying to move around the map.

Game 2: The second game was much like the first, but C9 allowed TSM ADC, Yiliang “Doublelift” Peng, to play his favored Lucian and he did not disappoint, going 6/2/5. The entire TSM squad had strong performances, but the win came from strong objective control, something C9 faltered at in the second game as well.

Game 2: The second match followed the same pattern as the first, but saw much more fighting as shown by the team kills, which went 24-19 in favor of IMT. Again, team fighting after 20 minutes went in favor of IMT, but EnVyUs did show signs of life compared to their play last week. For IMT, the top performance came from mid laner Eugene “Pobelter” Park, who went 9/4/8 as Viktor.

What are your thoughts on Day 1, Week 6 of the EU LCS 2016 and the NA LCS 2016 Summer Split?  Who do you think will take the respective crowns? Let us know in the comments below or on our Twitter – @GAMURScom