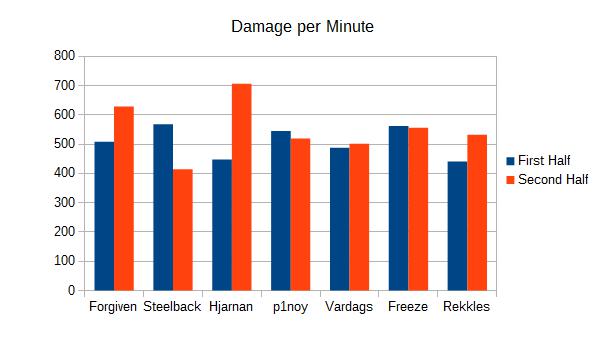 Look back at ADC damage statistics from the full split of EU Spring LCS.
I have these divided up by halves – we will be able to see trends over the season.

Why damage to champions? I personally feel it is the most important stat for and adc – says so in their name. Carry the game by doing damage with auto-attacks. Seems simple enough.
Now this sort of analysis does make adcs on teams that fight a lot look better. It would be best to include a structure damage + dragon/baron damage stat for teams that rotate around fights, but that doesn’t exist currently (rito pls). We’ll go through the stats quick and then do some evaluations at the end.
Unfortunately, we aren’t able to do a super good analysis, as no information is available from specific points during a match. But the statistics that are available allow us further our analysis on players.
I also only included 7 of the 10 players, ignoring the bottom three teams. That gets rid of some of the bottom dwellers.

First stat we will look at is damage per minute. I don’t like just looking at total damage, as it is skewed by teams that play longer games. So we normally the total damage stat by dividing by game time.

The biggest thing that sticks out here is Hjarnan’s improvement. The first half-split, he was near the bottom in terms of damage dealt, and now he is top by about 75 dmg/min. Also seeing major jumps in damage are Forgiven and Rekkles.
On the other hand, we have Steelback, who’s damage dropped in the second half-split.
Hjarnan and Forgiven lead in pure damage, with a large gap down to the average level around 500.

Again, big jump for Hjarnan, followed by Forgiven and Rekkles. This time Hjarnan is the only outlier; most players hover between 1.20 and 1.40.

Next is % of team damage.

Again with the increase by Forgiven, Hjarnan, and Rekkles, all three of which are now doing above 30% of their teams damage. Steelback and Vardags have the lowest damage percent, which matches their team perception (strong solo laners)

Final stat is a little more complex. We will look at the difference between percentage of team damage and percentage of team money. This is shown as a percentage over 100% – the higher the value, the more the player outperformed their expected damage (based on earnings).

We continue the trend of Hjarnan looking like an outlier. He does crazy amounts of damage for his share of gold earnings.
Rekkles and Forgiven also look very good in this statistic, providing well for their team.
Steelback, Vardags, and Freeze are all around 100% – they perform to expectations, based on earnings.

Lets conclude with notes on specific adcs:
Forgiven – Looks good in these stats. He has improved in every stat compared to the first half-split, and is in the top 3 in each stat. May receive a lot of gold, but uses it well.
Steelback – Fairly large dropoff in the second half. He is the lowest in these stats, and very much average. That may be a reflection of his role in Fnatic, but it would be good to see a higher damage output.
Hjarnan – Largest jump in the second half, and leads all of these stats. Does lots of damage, takes very little gold. He only receives around 25% of his teams gold, and deals over 35% of the damage. This may be a portion of why H2K has looked so good recently.
P1noy – Has dropped off, as he was one of the best in the first half, and closer to average now. Still does a good job, but not as well as before.
Vardags – Low damage, percent of team damage, but low gold earned as well. Shows little change over the split. Similiar to Steelback in that his team is solo lane driven, so the ADC does less.
Freeze – Little change in damage, but a lower percentage of his teams damage. He is also earning more of the teams income, driving a drop in the final graph.
Rekkles – Shows good improvement in the second half. Moved from bottom of the league to average in terms of damage, and greatly increased his share of the team’s damage. This has been done with around the same gold income. Very good sign for a player that has been questioned for his damage output.