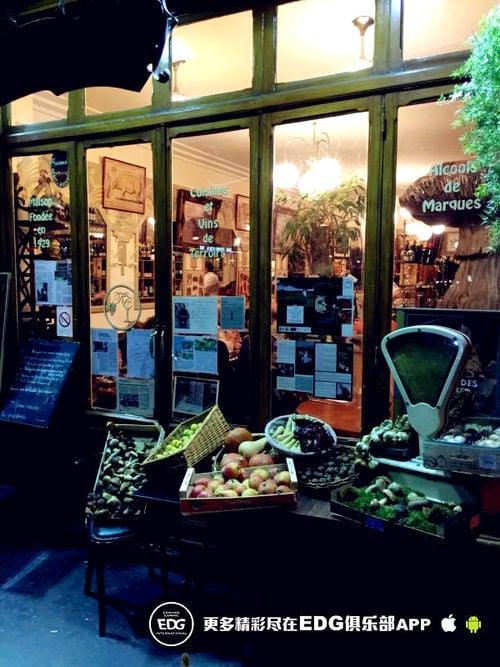 In the early morning, a white “dove” flew over. But I was slightly dazed, so I opened my eyes. The sky was brightening up. I pushed open the window curtains—and I still had that same feeling. A breeze of cool air touched my cheek. I made an effort to observe the surroundings—and I caught sight of the trees in the distance. Even farther away, the sky was still blue. I couldn’t see the airplane anymore.

Recalling the events from last night–even though I was a bit anxious, I was still happy. We’re in France. How could we not have tried French food? Under plans made by friends, we went to a French restaurant.

The restaurant didn’t look big, but it had a certain exoticism to it. The unremarkable front door was unable to conceal the delicate cuisine. Everyone really looked forward to tonight’s dinner. I heard the chef had 2 Michelin stars (note: for those who might not be familiar, 3 Michelin stars is the biggest honor you can give a chef).

Even though they thought the chef was a pastry chef, that didn’t stop us from cleaning our plates completely. Even Clearlove, who’s a picky eater, said to me, “This restaurant’s steak is really good.”

This evening gave Koro the deepest impression. While everyone was gorging themselves on delicious food, he was really trying to “sell” his own food. He ordered fish—underneath it was a couple of noodles. Everyone else got steak, roast chicken leg, rabbit leg, and lamb leg. Naturally, he didn’t go the usual route. He had no choice but to scavenge steak off his teammates’ plates.

Eating is always a fun event. Everyone repeatedly raised their glasses to make a toast—to celebrate the beautiful events in their lives, to bless each other, and hope for world peace.

After eating to our heart’s content, we left the restaurant. The moon was out, illuminating the ground. A group of young people were smiling—having fun, showing the innocence of kids their age.

I watched from a distance away, and basked in the happiness that these players brought me. Only Clearlove stood off to the side—imposing, as usual.

Deft was smiling, sitting on the stump of a tree. I walked over and asked him, “Have you ever heard of the idiom—to sit on a tree stump, waiting for rabbits (note: it’s a metaphor for waiting for opportunities, instead of grabbing it).”

He looked to his translator, and the translator was distracted—he asked me, “What does that idiom mean? How do I translate that?” As a result, I told the story of the idiom.

After he finished listening, he said, “That rabbit is really stupid. Just like Meiko.”

Afterwards, next to a sphinx statue, we decided to play a game that requires a very high IQ. Rock, paper, scissors. If you lost, you’d have to eat Paris’s famous little fruit—grapes.

This little fruit—I ate one, and I felt like the side of my cheek tensed up immediately (because it’s sour?)

I didn’t think Clearlove would join the festivities as well!

In the end, our little turkey (AmazingJ) lost. I wanted to run, but alas, Clearlove was able to grab the grapes.

On the way back, Meiko and our translator wanted to be in the same car as me. I thought they liked me or something. But this wasn’t the case.

It seems on the way to the restaurant, the driver was way too reckless. I asked why.

“Before, they said we came out too slowly because they were parked in front of the hotel. He thought that people would come and smash up his car.”

I sucked in a breath of air and told the driver, “Don’t park in front of the entrance. Just drive to the hotel.”

In the car, Clearlove—who was trying to act like a father figure—told the two kids a joke. Even though it was a bad joke, it was enough to make them laugh.

What was the joke he told? It hurts my head—I can’t think of it.

Anyway, time to get them out of bed in the morning. Today’s plan was to practice. After winning MSI, the team had to go conduct an interview. After leaving the window, I picked up the phone. “We’re leaving in 30 minutes. Whoever is late will have to walk there.”

After arriving to the practice area, everyone worked really hard to concentrate. Everyone looked very persistent.

Lunch was great. But we just weren’t used to the cuisine. So beforehand, I called a Chinese restaurant, hoping I could help out with lunch. In the eating area, we bumped into LGD. I was holding onto some dishes– “beef with hot pepper, pork strip with stir fried fish, and eggplant with ground meat.” There was absolute silence as I passed by.

Everyone put down their tasks (and cheese)—some people even took out their handkerchiefs to wipe away their tears. Their eyes–they were filled with hope.

They want to eat the food—so be it! If you want, send a representative to me tonight. After leaving, my sleeves were torn up and not a single dish was left. I also heard a round of applause.

The entire area acted like there was a concert today, especially fans of Faker, awaiting to meet him. Luo Li kept waiting at the entrance, awaiting his arrival. And he yelled “FAKER FAKER FAKER FAKER” when he arrived.

We were all dumfounded.

We know Faker probably doesn’t recognize him. But after greeting him, those two seemed like old friends. I turned my head to look at him—I reckoned he probably didn’t know where that reaction came from either.

All in all, we’re slowly getting used to our jet lag, sleeping habits, living arrangements. Hope we have some good luck when the competition starts.