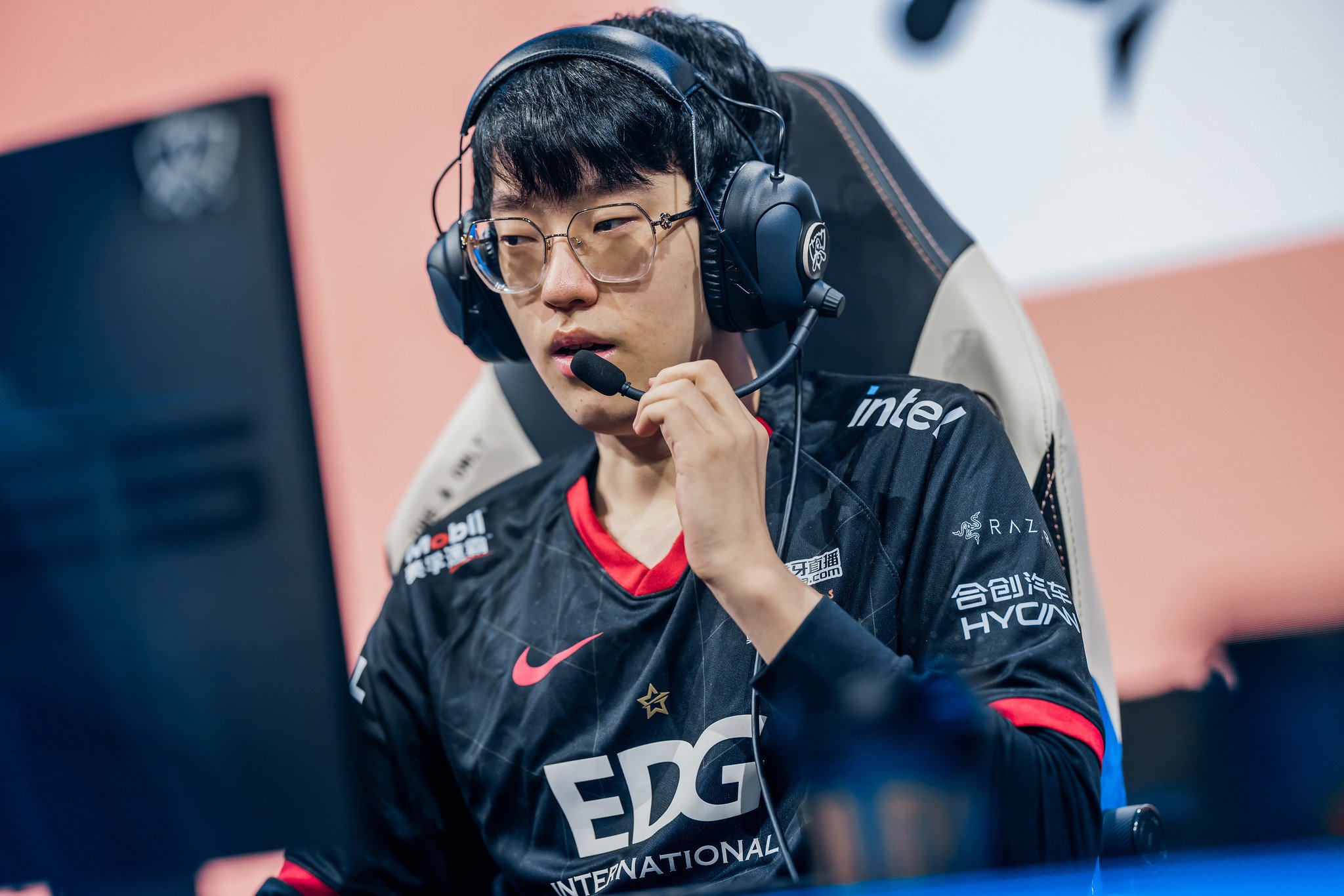 Lee “Scout” Ye-chan sat puffy-eyed and slumped in a foldable chair under Madison Square Garden. Every other noise in the quiet room was a sniffle or a cough that came from the reigning world champion, occasionally punctuated by a giggle and the dull tap of his thumb on his phone screen swiping away whatever had just elicited the rare joyful noise.

His Edward Gaming squad, less than a year removed from the highest of highs competitive League of Legends has to offer in a first world title for the stalwart Chinese org, had just been reverse swept by tournament upstarts DRX out of Korea—a feat that had only ever happened once prior.

For the victors, myriad storylines were there for the celebrating. ADC Deft had reached his first Worlds semifinal since 2014 and broke down in an emotional post-game interview to a groundswell of support after almost having one of the esport’s biggest “what-if” moments in a game two loss that saw him just 130 Nexus HP from tying the series before an inhibitor respawned. Support BeryL avenged his Worlds 2021 loss to EDG with DWG KIA and did it in his own unique way. And Zeka—the 19-year-old mid laner who kkOma, the coach who oversaw the SKT dynasty, brought with him to the LPL and Vici Gaming in 2020 as the next prodigious Korean mid laner talent—finally had his coming out party, capped off with a game-sealing quadra kill on Sylas to send the majority-Korean-supporting crowd of 5,000 at the Hulu Theater into hysterics and his team through to the semifinals.

For a DRX team that everyone had written off before the LCK had even wrapped up for the year, this might as well have been their World Championship.

“I just have one feeling, and it’s regret,” Scout told Dot Esports.

Scout wasn’t at his best in this series—not even he would have denied that. To the contrary, he acknowledged the significant part he played in his team’s defeat.

A result like this makes history for all the wrong reasons. Zeka, one of the five youngest players at Worlds this year, outclassed the 24-year-old reigning world champion when it mattered most in historically brutal fashion. EDG ran back the same roster that saw them lift the org’s first Summoner’s Cup only to become the latest team to fail to defend its title since Faker and SK Telecom T1 did it in 2016.

Scout, like many of the game’s great Korean players, was an SKT product. He played behind Faker and Easyhoon in 2015 and, after seeing the writing on the wall, left for China’s LPL, displacing 2014 world champion and 2015 MSI champion PawN in the mid lane and finding immediate success. The team won summer titles in 2016 and 2017. But after some lean years from 2018 to 2020 without any domestic titles and just one Worlds appearance, 2021 saw EDG win both. As the one-time heir-apparent to the greatest player of all time, especially now playing in a league like the LPL notorious for its roster turnover, no one would have been surprised to see Scout seek out greener pastures.

But like every pro who has reached the top, Scout is obsessed with winning.

“The only motivation that motivates me is the sense of achievement after winning the game, after we can see the whole team being able to be super strong,” Scout said. “So this sense of achievement has really allowed me to have this perseverance to stay here, to stay at EDG.”

In other words, if you win the title, everything along the way is worth it, at least in theory. Winning the 2021 World Championship validated the faith that Scout had put in EDG. Despite stretches with neither domestic nor international success and being compared to Faker and PawN when talking about his legacy, Scout became one of a virtually nonexistent number of players who stay with one team their entire careers at the top—like Faker.

The feeling of winning was the primary one that Scout gave as far as motivation. But starting a career in the shadow of the greatest player of all time, whether it was truly appreciated at the time or not, has developed an unavoidable tether between the two mid laners—a fiber comprised of more and more twine the more the two face each other. At Worlds in 2017, 2021, and 2022, the two faced off a total of six times, all in the group stage. Scout and EDG have won just one of those meetings.

The two are still friends, however.

So often with professional players, motivation has to be conjured, often out of spite or invented doubt. Given Scout’s origins, one wouldn’t be surprised to hear those sentiments directed at someone who he’s constantly compared to like Faker.

“I want people to, when they think about Scout, think about a very strong player just like Faker,” said Scout. “Because I feel like Faker, when you hear his name, you know Faker is… like a very special hero. So personally, I want to be remembered as a hero—like Faker.”

Aspirational motivation is the other side of that coin. With three LPL titles and a Summoner’s Cup to his name, despite a gut-churning exit from this year’s World Championship, Scout is chasing the GOAT. And maybe the pursuit of being mentioned in the same breath as a transcendent name so synonymous with the biggest esport in the world is exactly the kind of eternal well that Scout will keep plumbing to regroup in 2023.