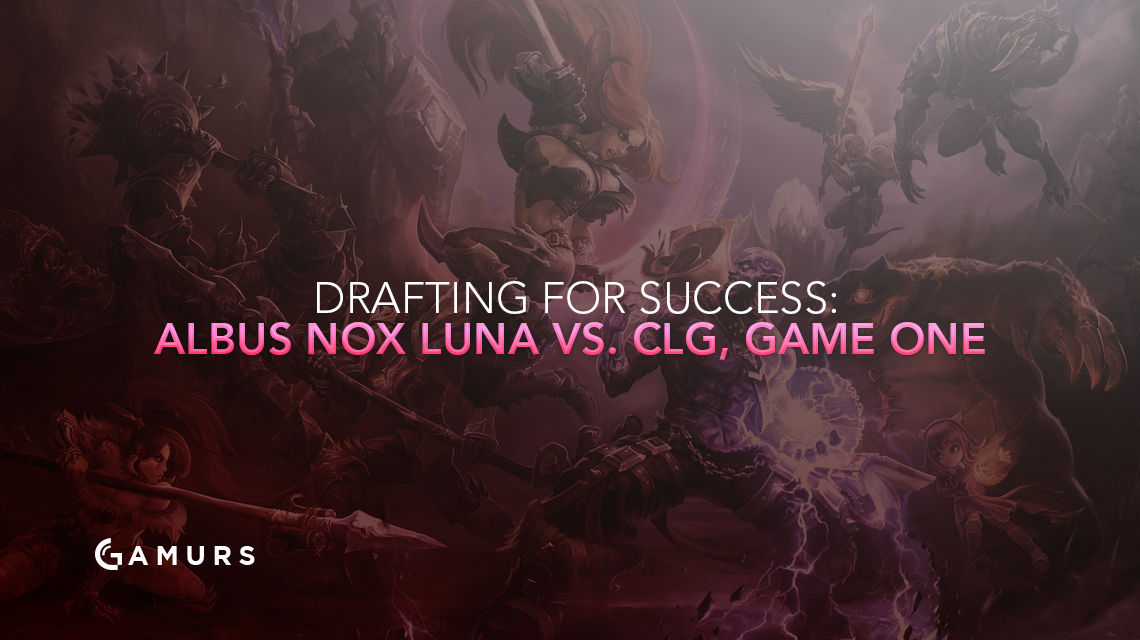 *Disclaimer: This analysis is done exclusively as an outside source. I have no inner connections with any of the teams, and thus can never know the true motives behind a decision.

While everyone can now play the prophet, no one actually believed ANX was going to make it as far in the tournament as they did, especially with how hard their group was for a wild card team. Even when G2’s terrible group stage helping them get into the playoffs, Albus NoX was able to win 2-0 over Counter Logic Gaming, proving themselves as the first wild card team ever to show a world class level, and even doing so in the most important tournament of the League of Legends competitive year. We will, in this article, take a closer look at the draft of their first game against CLG, and briefly examine how this shaped the match.

Very reasonable and smart bans were made by CLG. Knowing Kirill “Likkrit” Malofeev to be a proficient Brand support player, they obviously took it away. Since they were likely going for a pick comp, as we see later confirmed by they draft, a Shen ban is very reasonable as well, to keep him from protecting the pick target. Lastly, the Vladimir ban was probably due to ANX having played Vladimir into Jayce in their last game. Since Vladimir is not the best match against Jayce, suspicions about Michael “Kira” Garmash not having a very deep champion pool were more than reasonable, making sense of this ban. Finally, all of these bans took out gimmicky champions, forcing Albus into a more meta driven game, where CLG thought they would have an advantage, and avoiding a wonky game were they might get upset by what was perceived as an inferior team going into this match.

As for ANX, while their bans were good, I wouldn’t qualify them to be as crisp. If you plan on playing a poke composition, the Sivir ban is perfectly reasonable, so this was a very good decision by ANX. The same can be said about Caitlyn, knowing CLG to be a team that often likes to put all the eggs in the Trevor “Stixxay” Hayes basket. Taking away a comfort pick of his that allows for early game influence and is good late game as well, was also a very smart decision.

Where I personally disagree is on the Olaf ban. While it is true that with a poke comp you are looking to reach mid game even or ahead if you want your poke to have any effect, and it is true that Olaf is a great early game influence that will snowball if given the chance, but I cannot see a world in which you would waste your ban on him. With Syndra open, being such a strong meta pick, and Choi “Huhi” Jae-hyun having played it recently, it should have been very reasonable to assume it was going to get first picked, since she is one of the stronger mid lane champs in the meta. Wouldn’t you rather, in this situation, give your opponent Olaf than Elise? Olaf is a bad mid lane ganker, and Jayce is a pusher; it’s not as if your jungle could be easily taken over.

I get that the idea was to give CLG a pick comp to counter it with Tahm Kench, but wouldn’t a ban on Karma achieve this better? Taking away another speed boost further discourages the Olaf pick, plus you give your Tahm Kench an easier laning phase (even though it is true that Zaqueri “Aphromoo” Black is known for playmaking champions). If they picked Olaf, you can just take Trundle in your second rotation and laugh at him. Were they to take Olaf and Trundle in their second rotation, with Sivir and Karma banned, there is no way that they were ever engaging onto you, outside of some crazy Syndra plus Ashe combos, so that is a win as well. If they first picked the Olaf, you could still take Nidalee and Lucian and keep your comp flexible, so it is also not a big deal.

CLG first picked Syndra, a very reasonable choice that I doubt anyone disagrees with.

ANX picked Nidalee and Lucian. Very few of their desired comps were revealed at this point, yet both champions fit very well into it, while remaining flexible if the plan became unreasonable to follow, thus a great decision by ANX.

CLG took Ezreal and Bard, trying to bait ANX into a Karma, Zyra or Nami, as well as some mid they could also pick off, using the weakness of this bottom lane as a delicious and tempting hook.

ANX called CLG’s bluff and they picked the Tahm Kench. Jayce was picked as well, revealing the full idea of the composition. At this point, if CLG was to go for hard engage, the damage would not be enough to sustain ANX’s comp in the mid game. They would simply get destroyed, unless some snowball were to happen. The most probable lane to get snowball from in this scenario would be mid lane. Huhi often times looked shaky to say the least, so ANX must have known this to be not a very solid game plan.

Remember that, at this point, CLG didn’t know whether Jayce was going top or mid, which is a perfect example from ANX on how to use a flex pick. It would usually be clearly a mid lane pick, since the possibility of an Elise and Syndra combo was open for CLG, but you can’t risk not having any kind of frontline. Now, because of the Tahm pick working both as a frontline and giving protection to squishies, a mage could be selected and Jayce could be sent top lane.

CLG was now faced with a conundrum. They could either commit to the pick comp or draft into an engage comp. This is a very difficult decision; because of how well you need to understand what CLG is capable of, it can hardly be judged from the outside, so I will just try to break it down. On one hand, CLG could have gone for some engage and damage, be it something like Kennen or Rek’Sai. The problem with this path is that almost none of the meta top laners can be both a full time tank and initiate, and you need some kind of meatball to absorb the poke coming from ANX, so you would have to go with a full tank jungler and surrender early to mid game control to ANX, a very hard thing to do if playing into a poke comp.

On the other hand, if CLG went for the pick comp, as they ended up doing, you need to get the snowball going before it is too late into the game, where you will get poked out and lose control over objectives. This would be alright, were it not for the Tahm Kench, a hard counter for any pick comp. CLG ended up choosing to go with a pick comp, taking Poppy to give them both a tank and some disengage, and Elise, for early game pressure and pick potential.

ANX now picked Trundle, who can both abuse the Poppy on the split pushing scenario and serve as a disengaging tool for the poke composition. It plays a little bit into CLG’s desire for early snowball, being as the Poppy has better teleports until everyone starts scaling, but overall, this was still an excellent and by the book last pick. While CLG won the ban phase, ANX won the pick phase in a much more dominating fashion.

With the clock ticking, both teams had clear gameplans. CLG needed to look for early game picks that let them snowball the opposing poke composition out of the game, while ANX needed to get out of the laning phase even or ahead, then set up wards around objectives, and siege with the split pushing Trundle. On this regard, ANX’s invade on the early game was a very bad idea. Not because it went badly, and not only because it didn’t have any chance to succeed in the first place, but because they should have tried to give CLG as few early snowball windows as possible, and level one aggressiveness played exactly into CLG’s desired gameplan. It is a reasonable strategy if you come with the underdog mentality, trying to catch your opponents off guard and taking the game out of the usual, but it was a poor execution of this idea. Brand and Tahm Kench support are a way better execution of this concept.

CLG stuck to their game plan, and while they played aggressively and tried to look for snowballing opportunities, they couldn’t quite get it going. It should be noted that they very smartly loaded as much gold as possible into Stixxay, knowing that him carrying is the only way they can win the game, going even as they were, against a poke composition, because of Ezreal’s phenomenal scaling. In the end, a misplay in the dragon pit led the American squad to lose the Baron against the Russians, and even when they managed to get the mid inhibitor, a few team fight outplays and some over-reaches had them finally lose the game. It should be noted, however, that during very little of the game, ANX could actually execute their game plan, be it because of a lack of discipline, CLG’s constant disruption, or both.

In the end, Tahm Kench was just too big of a stick in the wheel for CLG’s composition, saving teammates time and time again, and proving how important and decisive the pick and ban phase can be to a game’s development, as the destiny of most matches are written in their draft.

Do you have any opinions regarding the this, or any other drafts? Let us know at @Cabramaravilla and @GAMURScom, we are always thrilled to hear from you.