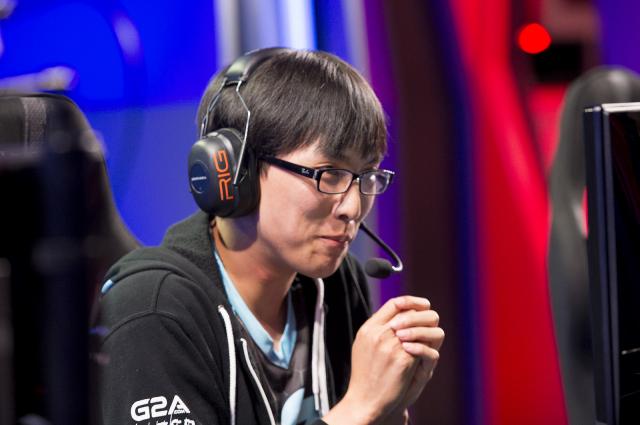 This article is part of a series written by the GoldPer10 crew to help introduce the players and prepare you, the reader, for the World Championship.

“I’m the greatest. Everyone else is trash.”

Keenly-followed sports tend to breed players who aren’t afraid to shoot their mouths off. Boxing has Floyd Mayweather, football has Zlatan Ibrahimovic, and League of Legends has Doublelift.

Heading into Season 5, however, the grinning outbursts of CLG’s poster boy had dried up along with the success of the popular organisation. The once-powerful CLG had become a distant memory – to a point where many had begun to doubt that the organisation had been a significant force at all.

A common denominator in all of CLG’s failures was Doublelift. Despite the roster being chopped and changed after each disappointment, Doublelift managed to keep his spot on the roster every time. Doublelift still occasionally suggested that he was better than his NA ADC peers, but neither his nor his team’s performances could back up his words. Fans joked about CLG’s eternal ‘potential,’ and perhaps Doublelift was the term’s ultimate poster boy. He showed occasional glimpses of greatness, and while few doubted his credentials as one of the most talented ADCs in the West, he still could not carry CLG to success.

CLG had to qualify for the 2015 Spring Split by playing a promotion/relegation match against Curse Academy. At the end of the split, Doublelift tweeted that he was considering retirement, and it became evident that Doublelift was no longer happy to settle for mediocrity – both that of himself and his peers. He eventually decided to keep playing for CLG, but it was clear that he craved success.

The 2015 Spring Split was a marked improvement for CLG and Doublelift. The team made it to playoffs, but their old tendency of imploding towards the end of the season reared its ugly head, and they failed to progress.

Link left the roster after CLG’s disappointing playoff performance, and released an infamous 18-page monologue. He wrote about the team’s internal issues, and placed a significant portion of the blame at Doublelift’s feet. CLG owner HotshotGG showed no intention of dropping the star ADC player, but some began to doubt Doublelift’s value to the team. Many believed that his ego might not be worth the talent he brought to the organisation. Such naysayers were proved wrong in epic fashion.

This past split has seen the resurgence of the Doublelift that fans had come to know and love in previous years. In leading CLG to its first ever NA LCS title, he was the hard-carry that his reputation had previously teased him to be, securing both the most kills and the highest gold-per-minute ratio in the NA LCS according to lolesports.com. While CLG were no longer a ‘Protect Doublelift’ team (in fact, the outfit now had three genuine carry threats), Doublelift still managed to be a DPS monster. Unlike the past, however, he did so without attempting to yank the media spotlight his way.

Previously he had been criticised for being a selfish player. This split, he obliterated such criticisms by playing turret-killing machines such as Tristana and Jinx, while also happily providing utility in the forms of Ashe and Sivir. In fact, he did not pull out his famous Vayne once in the entire split despite the meta being littered with tanks. Over the course of the season it was clear that he no longer felt the need to solo-carry games; instead of being Doublelift-plus-four, CLG was a team on which each player had their own, unique role.

Doublelift is in some of his best form in years, and it is ironic that this form coincides with him reclining from the media spotlight. In previous years many wondered how good Doublelift could be on a team where he isn’t the centre of attention, and today such questions are being answered.

However, while the NA LCS houses several good ADC players, the World Championships will still be a big step up for the cocky half of Rush Hour. Players such as Deft, Imp and Bang will provide a new level of difficulty for Doublelift, particularly given how strong their respective teams are as a whole. Additionally, Doublelift’s reputation precedes him, and it may paint a target on his back. But if there is one player who relishes an individual challenge, it is Yillian ‘Doublelift’ Peng.