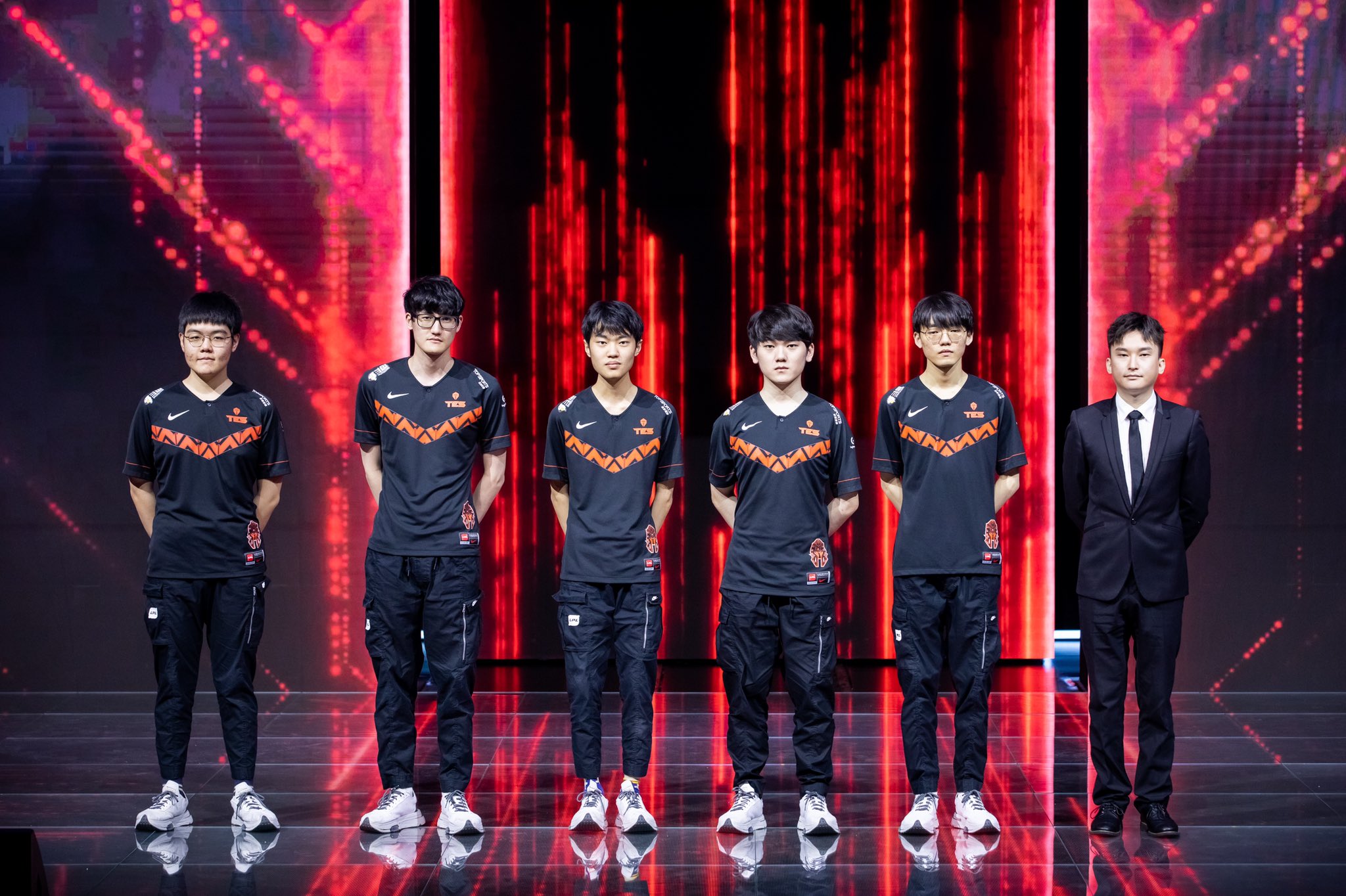 The League of Legends World Championship is almost upon us, and with the play-in stage starting Sept. 25, time is ticking away to place your bets on who will take this year’s crown.

Europe and China are fielding four seeds for the first time in the tournament’s history, meaning competition truly is closer than ever, and a single game could change everything for any one of these teams.

As a fan, it can sometimes be a little difficult to know who you’re rooting for, especially if your team didn’t quite make it to Worlds. Never fear—we spoke to our League analysts from across the world, and compiled our official power ranking of all the major region teams attending the World Championship.

With an aggregate score taken from our League of Legends writers, these are the teams we think will go the distance, and those we think will fall at the first hurdle.

PSG’s placement at dead last in this list is not entirely their own fault. But with their mid-jungle duo unable to play in the play-in stage due to quarantine restrictions, this team has the impossible task of building a year’s worth of synergy in two weeks with their play-in substitutes.

There are always very few expectations for minor region teams in the World Championship. But if Machi ruffles some feathers in their group, they can leave the tournament with their heads held high.

FlyQuest’s weakness is the top side of the map. If Solo cannot withstand a beating from players like Nuguri, 369, and Bin—aggressive laners unafraid to bully their opponents out of lane regardless of jungle proximity—then this team will be taking a one-way trip back to North America

Although their slow, consistent style racked Team Liquid up wins in their own region, jungler Broxah’s early-game passivity will be heavily punished at this tournament. In Liquid’s home region, there was no punishment by enemy laners for a lack of early jungle presence, and his team were simply able to safely farm until Broxah decided it was time to gank—but try safely farming into the Knights or the Nuguris of the world . Their hopes rest on the shoulders of the playmaking of one of the three returning World Champions at the tournament, support CoreJJ, but carrying from the support position is nigh impossible with the current champion pool of the role.

MAD Lions is Europe’s young, firecracker team—where the firecracker is equally as likely to go off in your face as it is to shoot into the sky. MAD’s inexperience is their undoing, with their disappointing performance in the LEC playoffs hinting at future struggles in best-of-five series. Although they have some incredible individual talents, including one of the most exciting AD Carry players to debut in Europe since Rekkles, their youth prohibits them from breaking into the top 10.

Can Bjergsen single-handedly carry his team out of groups for the first time in six years? In short, probably not. Although he is an incredibly talented midlaner, the mids at this tournament are some of the most skilled players the world has ever seen, and laning into them simply doesn’t offer the leeway to carry one-vs-five. There is some promise in top laner Broken Blade, one of the few Western talents who has the potential to go toe-to-toe with Korea and China’s aggressive top laners. But his all-or-nothing playstyle can just as often lose his team the game as it can win it.

Rogue unfortunately drew the short straw for Europe in the groups draw and are now matched up against some of the most challenging opponents in the entire tournament in Damwon Gaming and JD Gaming. Despite finishing first in the LEC regular season, the relative inexperience of their roster in a best-of-five situation became clear in the playoffs, where they lost out on a finals spot in a five-game series against G2. Although taking last year’s Worlds finalists to a five-game series is no mean feat, Rogue are very much entering their group as the plucky underdog—able to upset the standings but unlikely to make it to the playoff stage.

Similarly to Suning, LGD are a fairly unknown entity on the international stage, although heir key component is Worlds finalist and internationally renowned jungler Peanut. But his performance this split has been relatively inconsistent, and the team has often struggled to close out on early leads gained through an incredibly aggressive playstyle.

As with DRX, Gen.G very much revolve around a single player—in this case, ex-World Champion AD carry Ruler, one of only two returning World Champions at the tournament. But the reason that Gen.G come in lower in these rankings is simply that their star player is in a less impactful role with mid lane being one of the most influential roles in competitive play and AD Carry being one of the least

It’s unfair to say that any team is being carried by one individual player. But if there were any team for which that statement would ring true, it is DRX. Mid laner Chovy put up one of the best performances of his short career in DRX’s Summer Split, and if he is able to perform to the same standards internationally, then DRX have a reasonable chance for success at this tournament. Their clear drafting issues, however, combined with the health issues that have plagued veteran AD carry Deft for the entirety of 2020, may prove insurmountable in combination with their volatility.

One of Europe’s most historic names, coming in at number six, is Fnatic. A mediocre regular split performance left many wondering if they would even qualify for the World Championship. But an unexpected run of dominance in the Summer playoffs brought them to another LEC finals spot. Although they lost 3-0, Fnatic are slowly starting to look like a dominant team again, with the consistency of AD carry Rekkles providing a cornerstone for the aggressive playmaking of support Hylissang and top laner Bwipo. As long as Fnatic can control their sometimes questionable mid-game decision making, they’ll definitely be a team to watch at this tournament. But their teamwork and cohesion, which has been an issue for the team all split long, will be duly tested against some of the best in the world.

As China’s third seed, international fans could be forgiven for having few expectations of Suning heading into this tournament. It is the international debut for all bar one of Suning’s players: support SwordArt, who’s an ex-member of the infamous Flash Wolves lineup. As appears to be the theme for this year’s Chinese representatives, Suning’s secret weapon is jungler SofM, although not for the reasons you might expect. SofM breaks the mold, foregoing the global carry-jungler style in favor of more supportive picks like Trundle, Lee Sin, and Jarvan. This is one of Suning’s greatest strengths, but also a huge weakness, and one of the main reasons they cannot go any higher in our power rankings. They are playing a style unfavorable in the current meta, and if they cannot execute it perfectly, they will be heavily punished.

JDG miss out on a top-three spot by a hair’s breadth. Their strongest player, jungler Kanavi, is one of the best players at the tournament, and there’s an argument to be made that he is the best jungler. The problem is, however, that historically it’s not junglers who decide a World Championship, but mid laners. That’s evidenced by the fact that the star players on both previous World Championship rosters were their mid laners. The ability for mid lane to affect the whole map while simultaneously getting the kind of gold income junglers can only dream of cannot be ignored. And while Yagao is an excellent player, the mid laners at this tournament are a force to be reckoned with.

This is a controversial one, with G2 and JDG tied for third place in our internal polls. Although both teams are fairly matched, it’s G2’s mid laner Caps that edges them ahead of JDG and into the top-three spot. The LEC has never truly seen a mid laner like Caps before. And he’s proven that he’s Worlds finalist material, once with G2, and once with Fnatic. G2 have adopted a remarkably different jungle style to the carry champions that have seen so much global playtime, in which Jankos takes one for the team on early ganking tanks to enable his laners, rather than having his laners come to him for early jungle invades. Though unconventional, it has found the LEC team a whole lot of domestic success, winning their regional finals in a clean 3-0 against the carry jungle style piloted by Fnatic.

Korea’s hope for international salvation comes in the form of Damwon Gaming. This team has been turning heads all split in the LCK with their superior teamfighting and objective control, largely courtesy of the roaming style of mid laner Showmaker. In Damwon’s LCK finals matchup against fellow Worlds attendees DRX, Showmaker completely neutralized the effect of an incredibly strong laning mid in Chovy simply by pushing his wave and leaving the lane to assist jungler Canyon in beating the enemy jungler to death. After Korea’s historically weak international performance over the past two years, Damwon are the region’s main hope for redemption. With an impressive performance last year after coming through the play-ins stage, Damwon fell to subsequent finalists G2. Will they be able to take G2’s spot this year?

As the first seed from the most dominant international region and home of two previous world champions, it’s not exactly surprising that TES are favorites to take the championship. Don’t be fooled, however. It’s not their regional pedigree that secures them the top spot, but their unmatched ability to play for mid lane two-vs-two skirmishes. With the importance of dragon souls in the global meta, early fights around the mid lane have defined victories in every major region, and TES have arguably the best mid-jungle duo in the world in Karsa and Knight. The only team that can come close to them in two-vs-two power is Damwon Gaming, and the superior skill of TES’s hyper-aggressive bot lane edges the Chinese first seed into prime position for the World Championship title.