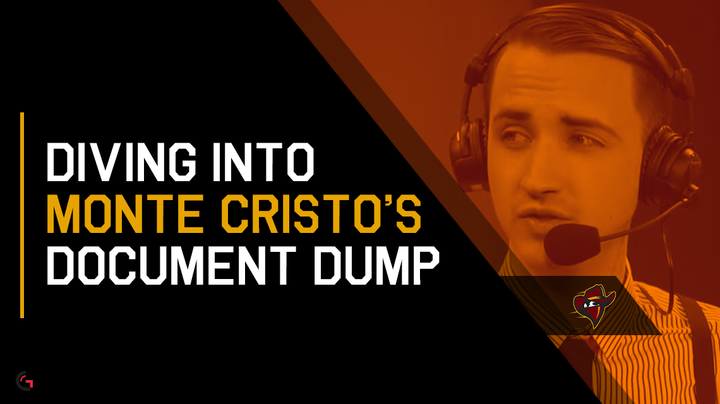 Check any and all comments concerning Christopher “Monte Cristo” Mykles’s new video discussing Riot’s investigation of the Renegades. Most seem unable to wade through the palpable insolation and injustice of the Riot Games investigation to see the bright bits of information bubbling to the surface. Unlike the Badawi AMA, which was mostly concerned with the actions and character of Badawi himself, Monte Cristo’s document dump and vlog has best conveyed the duplicity of both sides while giving the public almost unmitigated access into some of the core issues of the incident.

The documents released by Monte Christo this week centered around information requests made by Riot games in order to prove the legitimacy of the five-man TDK/Renegades trade. Riot wanted two pieces of information: 1) copies of Shin “Seraph” Woo-yeong and Noh “Ninja” Geon-woo’s new contracts and 2) the dates in which those contracts were reassigned. Monte did provide copies of both contracts and their written reassignment in a March 16 email, but it appears he nor did his lawyer, Bryce Blum, ever reveal the official signing date.

After Monte Cristo sent over the documents on March 16, Avi Bhuiyan, a Riot Games employee, requested either the dated original copies or a simple clarification by Monte Cristo about the date of signing. Concerned by this line of inquiry, Monte Cristo referred Bhuiyan to Blum.

In his March 18 email, Blum stated that the original trade between TDK and Renegades was a verbal agreement which occurred before the trade deadline, which was on March 1, but he, like Monte Cristo, did not give a specific date to when the trade was effectuated.

More specifics about this trade, such as the date of finalization might have been included in original trade paperwork submitted to Riot before the trade deadline, but the date is ultimately never stated by Monte Cristo or Blum in any of the released documents as requested by Avi Bhuiyan.

However, on March 24 in Bhuiyan’s initial response to Blum, he complains that Monte Cristo and Blum have given him undated documents “that are later revealed to have been generated after our request for verification…” Neither Blum or Monte Cristo stated when the assignment contract was generated in the provided exchanges, so either Bhuiyan misspoke or there were additional emails from Monte or Blum to Bhuiyan that are not included in this release. While the cohesion of the conversation suggests no messages were excluded, these possibly missing emails could explain Monte and Blum’s failure to provide the finalized trade date.

Cash Flow Crisis and Other Omissions

On April 21, Bhuiyan requests that Monte Cristo send proof that the Renegades organization had paid Seraph and Ninja their contractually obligated dues. In the provided documents, Monte never sent proof of payment to Bhuiyan or any other Riot employee. In his vlog, Monte explained that the Renegades organization could not pay because they had serious “cash-flow” due to actions of Riot themselves.

In a separate series of documents, Monte shows how Riot mistakenly sent their LCS stipend to the TIP house in a bizarre accident. The missing March payment seemed to be corrected by April 5 with Bhuiyan promising to deliver payment “ASAP.”

While Riot is clearly at fault for delaying Renegades from paying their players and therefore hampering Monte’s ability to show proof of the payment, the timelines do not perfectly sync.

Given the expediency expressed in Bhuiyan’s April 5 email, you would expect the Riot stipend would arrive within a few days, and Monte himself said that the check arrived within the week. Bhuiyan asks for proof of the Renegades’ March payments 16 days later on April 21.

The following day, Monte says he will send proof of payment once the payments are made, but the released documents never show Monte sending over these proof of payment documents even as communications continue until May 8, over two months after the original acquisition of the ex-TDK players. This extended delay may have given the Riot investigation very legitimate concerns about the transparency of the Renegades organization, the financial strength of the organization, or its willingness to pay their players in a timely manner.

In his vlog, Monte states that Renegades paid Seraph and Ninja later than May 8 due to the lingering complications created by the Riot mishap. Monte also stresses that their late payments were still within the 60 day window afforded to them contractually.

The final oversight by Monte Cristo is far less pressing. Following Monte’s long email reply on April 22, Bhuiyan asked two relatively straight forwards questions: “To be clear, you consider Ninja and Seraph to still be REN players under contract with REN? And equally you consider RF, Alex and Flaresz to be TDK players?” Monte stated that not responding to Bhuiyan’s questions was a simple oversight on his part, not a deliberate omission.

A smaller but apparently overlooked point of contention in the released documents was the permissibility of using verbal agreements to finalize trades in the LCS. The 2016 Spring Split ruleset states that “All Starters must have a written contract with the team they are playing for. The contract must represent the entirety of obligations between player and organization,” which seems more or less straightforward. However, Bryce Blum makes a curious argument in his March 18 email,

TDK and Renegades entered into a verbal contract to assign the player contracts of Ninja/Seraph from TDK to RNG and of Alex/RF from RNG to TDK. They further manifested their intent to be bound to this agreement by discussing the trade with Riot and filling out all appropriate paperwork to effectuate that trade under LCS and CS rules. All of this was done before the trade deadline, thus there was a legally binding trade agreement between the two the parties and each player was validly contracted to their new team before competing in the applicable matches.

What is unclear here is the correlation between a “legally binding” agreement and an agreement that meets Riot’s ruleset. The ruleset does not state that trade has to be “legally binding” in order to compete with another organization, it specifically says a “written” contract must be in place. Blum must believe that a verbal agreement plus the interactions with Riot effectively transferred the written contracts of players from one organization to the other making them valid per the Riot ruleset.

Bhuiyan argues that such an agreement would not be valid in his March 24 response stating that “As a practical matter we don’t believe the spirit of the rule that ‘All Starters must have a written contract with the team they are playing for’ is satisfied by an oral assignment of a contract,” but he does grant that the ruleset may be changed in the future to better clarify Riot’s intentions. While a revamped sub/loan system was added to the 2016 Summer Split rules, this specific issue was not addressed in the official release.

Perhaps an outside party with legal experience or expertise could better clarify the legitimacy of Blum’s argument. If Blum is not correct, then Renegades did violate official league rules.

Given Monte Cristo’s vlog, it appears that the “Application for Team Participation rights” form was released by Monte only in order to show that he properly disclosed the organizational position of Chris Badawi. But release of the document inadvertently shows two reveling tidbits of information. The first is somewhat of a red hearing. In the ‘Additional Team Entity Information” section, the first question reads, “Has the Team Entity ever undergone a reorganization, change of control, bankruptcy or similar proceeding? If so, please explain.” Monte checks “no” which may have initially led some to believe Monte Cristo made a mistake or deliberately answered incorrectly as Riot forced Chris Badawi to sell his ownership stake in Renegades following the June 2015 ruling.

However in this document, “Team Entity” is defined by the legal entity which owns the LCS slot. As stated in the Jacob Wolf ESPN article, Renegades did not reorganize or change control of their controlling legal entity. Renegades moved from “C.B. Gaming LLC” to an entirely new entity called “Mykles Gaming LLC,” so Monte was correct to mark “no” on the form.

This answer gives Riot some additional information about the Renegades organization. The answer suggests that Mykles Gaming LLC is not a renamed “C.B. Gaming” with new ownership but its own separate entity, which further suggests a lack of ownership stake by Badawi.

But the more interesting item to consider would be the second paragraph of the “Terms and Conditions Agreement” section which reads,

Any controversy or claim arising out of or relating to this Application for Team Participation Rights shall be settled by arbitration administered by the American Arbitration Association in accordance with its Commercial Arbitration Rules, and judgment on the award rendered by the arbitrator may be entered in any court having jurisdiction thereof. There shall be a single, neutral arbitrator appointed as provided in the AAA Rules. The law of the State of California shall apply and the arbitration shall be conducted in Los Angeles, California.

The key phrase here is “arising out of or relating to.” To what degree does a controversy have to “relate to” this document in order to secure third party arbitration by the AAA? While questions surrounding the ownership of both TDK and Renegades were central to the May 8 ban of both organizations, does the subsequent controversy qualify as “relating to” this document?

Team Entity ownership and management information were disclosed by Monte Cristo, which Riot directly claims to have been misrepresented in their ruling, but if Riot argue that the supposed ownership alteration happened after the document was signed, would Renegades still qualify for this arbitration?

Also, Renegades competed completely unfettered in the Spring Split, but it is uncertain if these ownership rights carry over into the Summer Split. Would Renegades have to renew this agreement by an additional iteration of document each split in order to qualify for arbitration?  Again, perhaps an objective legal professional could clarify.