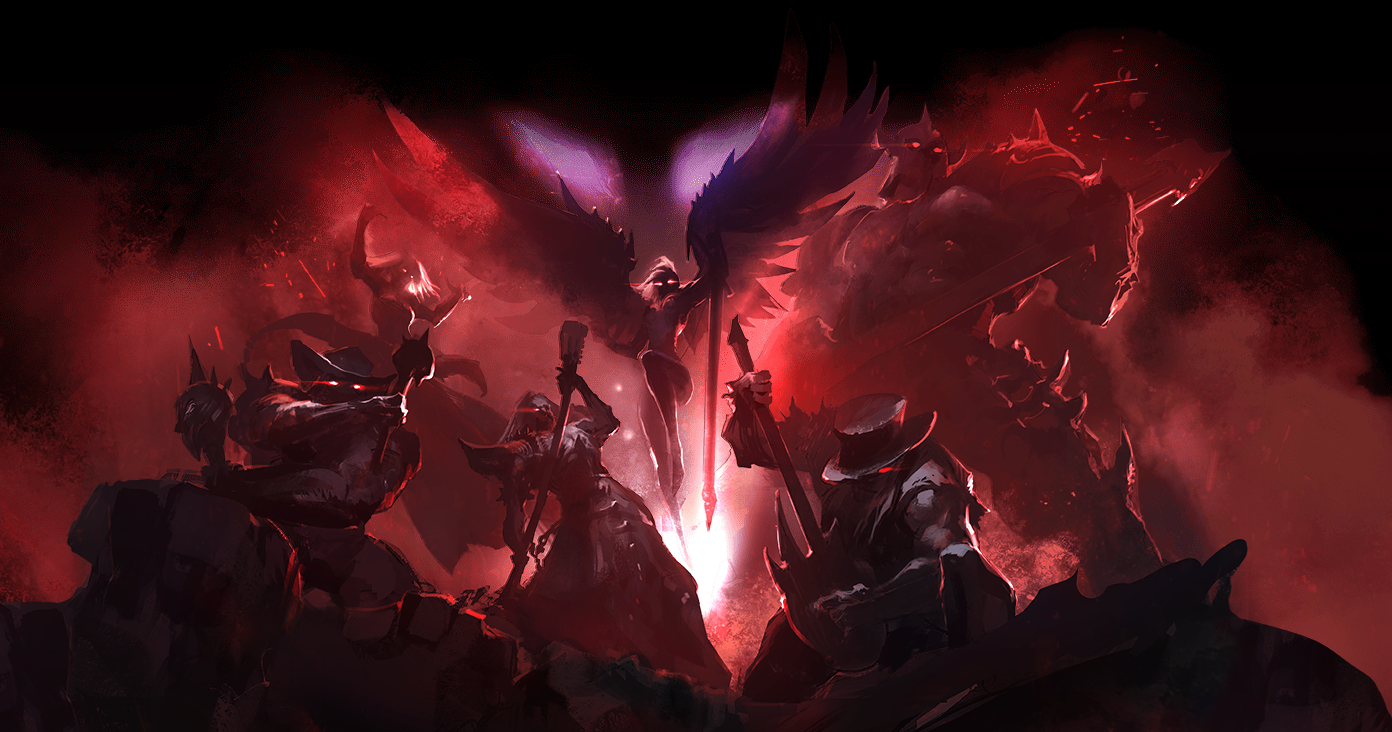 It’s been three years since Riot took the in-game metalheads known as Pentakill and turned them into a real face-melting band. Since then, we’ve had two amazing albums, both of which made it to iTunes’ top 10 metal albums. Oh, and there’s been a whole lot of headbanging. A lot.

The second album dropped last week, and since then, League of Legends fan theorists have been coming out of the woodwork to speak up about something. After listening to the lyrics of songs on the first album, Smite and Ignite, and then paying attention to the lyrics of the new album, Grasp of the Undying, something has become very clear.

The lyrics chosen for Pentakill’s songs may be hints for new champions.

Some of the songs on each album seem to drill down on a very specific topic, and in this case, they seem to focus on a particular person or entity. To start, we’ll travel back to the end of May 2014—when “Lightbringer,” the first song to be released from Pentakill’s first album, was revealed to the public. Let’s look at the lyrics.

“Those cravens back-stabbed me, deceived me.

Never shall I tolerate their crimes again.

Not too long ago, this village was a golden scene of hope.”

Whose perspective could this song be from? None other than the undying spirit of vengeance and retribution herself, Kalista, a former general of a kingdom long forgotten. Following a series of very unfortunate events, Kalista found herself on the Blessed Isles, where she was betrayed by her trusted ally, Hecarim, shortly before the Blessed Isles were warped into what we see today when we play on the Twisted Treeline map—the Shadow Isles.

Back then, of course, Hecarim was a human, but due to the events that day on the Blessed Isles, he was damned for eternity—fused to his horse as a specter, and forced to ride until all days come to an end.

Kalista sees only vengeance, and her entire being and purpose on this world is to cut down those that have betrayed others. One might call her The Punisher of League of Legends, except she’s a ghost instead of a comic book antihero.

“The hunt” refers to her eternal conquest to slay all liars, cheats, and backstabbers. The cravens obviously refer to those that wronged her and caused this mess, and the 7,000 souls and the beautiful village? Her town and its citizens before they were massacred. Alternatively, it could refer to the Blessed Isles before its demise—a demise that her traitors directly caused.

It’s clear, or at least it seems clear, that “Lightbringer” was a story told from Kalista’s point of view. There are just too many similarities to ignore. So when did Kalista come out? November of 2014, nearly six months after the League community heard “Lightbringer” for the first time.

That brings us to today. Grasp of the Undying launched last week, and it kicks ass. That’s no secret. It topped the charts just like the first album, and also like the first album, League’s resident fan theorists have been picking it apart—including us. The first song that looks to be full of allusions is “Tear of the Goddess.” It’s possible that the song is referring to Ornn, one of the demigods of the Freljordian people.

Keep us from cold.

Let us fight once more,

‘Til our honor is restored.”

Since Ornn will be here next patch, maybe these words come from a scared Freljordian, pleading to Ornn to help them for some reason. He is a favored demigod of the Freljord, so if those people come into trouble, he may be one that they’d call on.

The song also mentions flames a lot, which Ornn works with often as he’s a blacksmith. The flames mentioned in the song are usually referencing very bad things, and Ornn is a generally good, lovable guy. Those lines seem way too grim to be about him, making the theory about Ornn a stretch. For that reason, there are far more plausible theories.

Breaths the flames from the dying suns

And lives to wake the dying ones.”

Some sort of monster may be prowling below Runeterra. A terrible, sun-eating, flame-spitting monster. The song mentions “the unknown terror” several times, and pleads to the “keepers of old” to help them out in their fight against this beast. The champion this song may be referring to could either be a giant monster or one of the “old ones” being prayed to. Given that League is very fond of giant monsters, it’s probably that one. Although, this isn’t the only song that mentions a guardian of some kind.

“Mortal Reminder” is sung from the point of view of a sort of guardian. The chorus of the song comes from one that stood against an onslaught while their land was massacred around them.

“As the masses came

They laid siege to all we ever had.

I stood strong, I was honor bound.

I stand defiant, I stand ever proud.

I am the chosen.

I am the guardian.

This sounds eerily similar as well. When Kalista was betrayed by Hecarim, he stabbed her in the back with his spear after she refused an order from her mad king to slay the guardians of the Blessed Isles until they gave him what he wanted—a cure for his dying wife. She refused to slay innocents, so Hecarim cut her down for the king, and then the onslaught against the Blessed Isles and their guardians began. This could be one of those guardians, and more importantly, this particular guardian could be our next champion.

On the other hand, some lines from “The Bloodthirster” support the giant monster theory as well, making references to something that was summoned to annihilate many people.

“You tried to break our will but you failed

Until we were just dust and remains.”

Clearly, the “serpentine flame” that was summoned caused the death of whomever this song is about. Could that “serpentine flame” be the sun-eating beast that dwells below the earth in “Tear of the Goddess?” Serpentine could also be translated into meaning a snake or something snakelike.

Is there a giant snake monster or another terrifying being that breaths fire coming to League? Could it be some sort of guardian that was tasked to defend lands against impossible odds? Could we be looking way too much into this? The answer to all of these questions is “possibly,” but we won’t know anything for sure until more champions are released.

Until then, we’ll have our tinfoil hats on and at the ready.