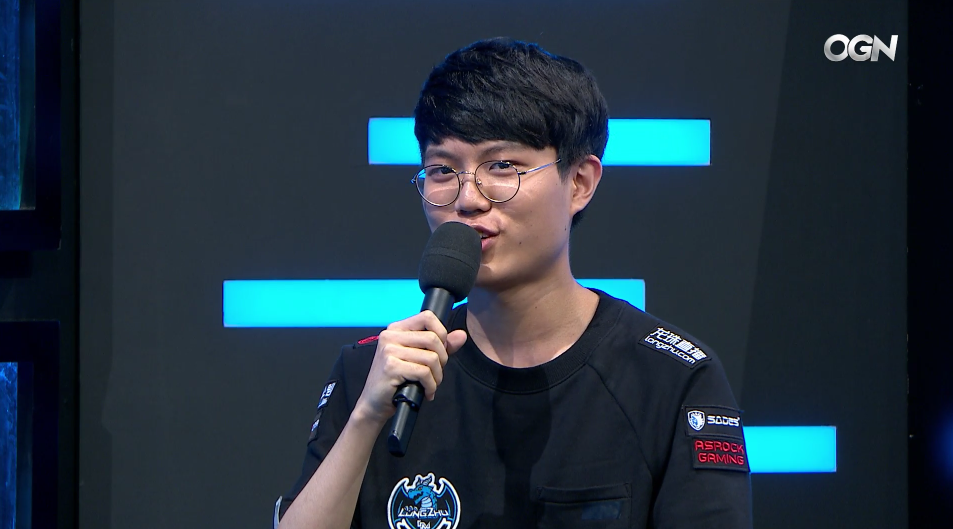 As the 2017 League of Legends World Championship quickly approaches, Longzhu Gaming enter the group stage as tournament favorites. The champions of Korea’s strength lies in their formidable side lanes, which almost always pressure their opponent. Add in Gwak “Bdd” Bo-seong, a rock in the mid lane, and Longzhu boast a set of world-class laners.

But no team is without its flaw. And Longzhu’s weakness comes in the form of its jungler, Moon “Cuzz” Woo-chan. A rookie who made his debut in the beginning of this summer, Cuzz is a solid but imperfect player. And his problems stand out more playing alongside the likes of Kim “PraY” Jong-in and Kang “GorillA” Beom-hyeon, the world’s current best duo lane.

Cuzz’s exploitable early pathing, in tandem with his over-aggressive tendencies, has made the jungler a minor liability for Longzhu. SK Telecom T1, who lost the LCK Summer Split final to Longzhu 3-1, found their sole win that series by abusing Cuzz’s early pathing. Cuzz, who usually got away with his pathing due to the pressure of his laners, found himself exploitable when those same laners were pushed into their towers after a failed invade at level one.

Although Longzhu managed to work around its jungle weakness in the LCK, the World Championship will be a much different trial. Pitted against Immortals and GIGABYTE Marines, two teams with dangerous junglers, in two best-of-one games rather than a series, Cuzz could encounter some group stage troubles.

If Immortals were the Teenage Mutant Ninja Turtles, Jake “Xmithie” Puchero would without a doubt be Donatello. The more reserved turtle out of the quartet of ninjas, Donatello’s contributions to the turtle’s crime fighting is left unappreciated by viewers when put next to his brothers, who fight with flashy weapons.

Like Donatello, Xmithie’s efforts, while vital to Immortal’s success, are outshined by his teammates’ more action-packed highlight plays. One of the best pathing junglers at the World Championship, Xmithie trounced his North American jungle competition in the Summer Split with efficient early game movement, and methodical play. Although you rarely saw Xmithie dominate the opposing jungler with deep invades (like SKT’s Han “Peanut” Wang-ho might do), the Immortals jungler has a convenient habit of almost always being at the right place at the right time. Whether it be a perfectly timed counter-gank, or a coordinated invade with a fellow Immortals player, Xmithie’s early game jungling is without glaring holes.

While he may not need to worry about Xmithie’s counter-ganks too much, Cuzz should be wary of Xmithie and company’s early invades. With volatile junglers in the meta like Ezreal, one smart invade onto Cuzz from Immortals and the North American second seed may sneak a win through an early snowball.

A complete opposite to Xmithie, Đỗ “Levi” Duy Khánh is his team’s playmaker. A proponent of carry junglers, Levi’s not afraid to play a fast and loose style for the sake of early kills, no matter the opponent.

The star behind GIGABYTE Marines’ awe inspiring Mid Season Invitational run, where the GPL champions beat the likes of TSM, G2 Esports, and Team WE, Levi became an instant hit with Western fans. Levi’s playstyle, an amalgamation of continuous jungle plays, made for fun games to watch as a spectator. But even more importantly, Levi’s aggression actually worked.

From level two top lane ganks to coordinating five man dives bot at five minutes, Levi’s risky plays caught teams off guard. And depending on how well his risks paid off, Levi could force even the most macro heavy teams into playing what amounted to a team-deathmatch.

Despite the rise of tank junglers over the last few months, Levi will still have a couple of carries to whip out in the group stage. Ezreal and Lee Sin, who saw play during the play-in stage, hold enough power to snowball games, especially when pitted against the popular scaling team composition based around a hyper-carry. If Cuzz can’t match or abuse Levi’s volatile playstyle, Longzhu could be sucked into Marine’s pace.

Although it’s highly unlikely Longzhu finish their group lower than first, like ROX Tigers in 2016, the Korean first seed can easily drop games. And if Longzhu indeed do lose games, don’t be surprised if it’s off the back of stellar play from Levi or Xmithie.