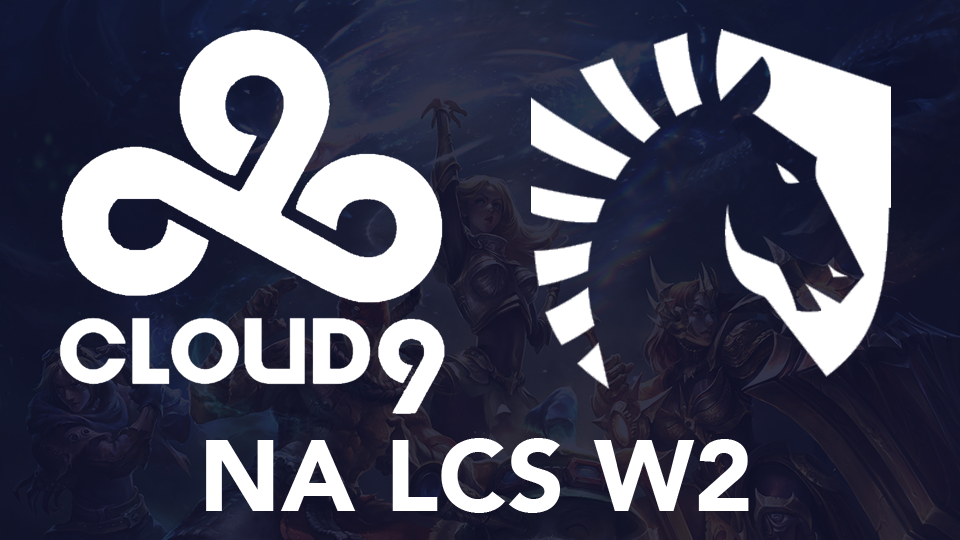 Week 1 of the 2015 NA LCS Spring split kicked off with chaos.  Ending with eight teams tied for 2nd place, it was nearly impossible to properly rank North American teams even after the first week had concluded.  The teams not tied for second place were Team Liquid (2-0 with wins over Team Impulse and Counter Logic Gaming) and Cloud9 (0-2 with defeats to Team SoloMid and Team Gravity). Day 1 of the second week of the NA LCS would feature these two teams face off in a battle that would likely define the coming weeks of play.

North American powerhouse, Cloud9, came out of Week 1 without a victory in what was a “shocker” to fans.  The two-time NA LCS and IEM San Jose champions had finished the past three splits with first place in the standings, only dropping a best-of-five finale to Team SoloMid in the Summer playoffs.

Underwhelming performances from C9’s solo lanes alongside a poor performance from jungler, Will “Meteos” Hartman, contributed to the two-loss week from C9.  Also usually known for their stellar shot calling, the team lacked strategic play that was apparent in previous splits.

On the other hand, Team Liquid opened the season with an undefeated week, despite using substitute Yuri “KEITH” Jew as a replacement for recent import Chae “Piglet” Gwang-jin in the AD Carry position.  Opening up with a “Protect the Kog’Maw” strategy vs Team Impulse, the team was able to use strategic play to work around a multicultural TiP lineup. The team also used a hard-engage composition to take down Counter Logic Gaming in their second game of the week.  The impressive performance handed the Week 1 MVP award to jungler Christian “IWillDominate” Rivera, and ADC KEITH finished the week with the highest number of fantasy points.

Piglet would be debuting with Team Liquid in Week 2, the only change between the rosters of the teams since the previous week.  While KEITH brought a “hyper carry” style of play to the team, Piglet’s aggression could give the team another boost heading into their game against Cloud9.  Gwang-jin, not a fluent English speaker, presented a potential issue going into their match, however.  While Xpecial and the rest of TL might have had synergy with KEITH, a lack of communication  due to the addition of Piglet would worry fans of Liquid.

The play of Cloud9’s sololaners Hai “Hai” Du Lam and An “Balls” Van Lee also would be a topic of interest for NA LCS viewers.  Losing lane to Keane’s Zed and getting solo-killed by Bjergsen’s Ahri raised concern for C9’s shotcaller in Week 1. Balls was also unable to get anything going for his team in Week 1, specifically in his underwhelming performance vs Team SoloMid on Gnar.

Picks and Bans: Priorities from W1 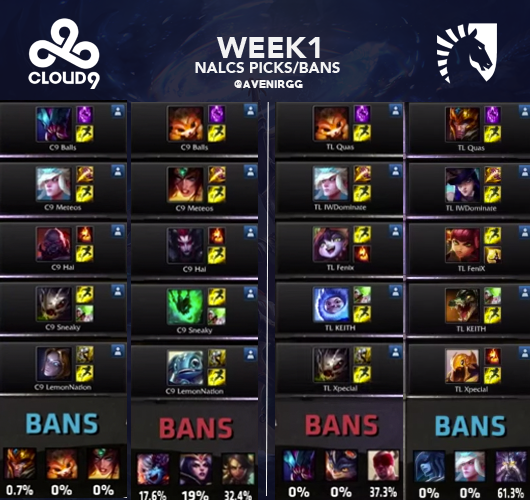 While there is a lot to cover, the choice to run Kog’Maw compositions is interesting to look at.   In their game against Team Impulse, TL completely dedicated their team composition towards the “Protect the Kog’Maw” strategy. The composition allowed Lulu, Janna, and Nunu to buff the ADC while Gnar would attempt to peel using his ultimate and stun. While it could be argued that the composition has a lack-of-damage when Kog’Maw is dead, tactical play from Liquid allowed the comp to be played out properly.  Cloud9 attempted a similar Kog’Maw strategy, that did not seem to pan out due to losing lanes and a strong engage from their opponents, Team Gravity.

Liquid also valued hard-engage, a priority that Cloud9 did not seem to have in Week 1. Picking Elise instead of Jarvan IV in their game against TSM, and then relying on a successful “Unstoppable Onslaught” from Balls’ Sion forced C9 to play out engages perfectly in order to find fights.  Week 1 also saw neither team choose to play champions Lissandra or Kassadin in mid or top, with TL choosing to ban out the pair on blue side vs CLG.

The teams’ Week 2 clash would likely see champion select have a huge impact on the result of the game.  Gnar, Jarvan IV, Rek’Sai, Lissandra, Kassadin, and Sivir would all be prioritized champions in the meta going going into their match.

Out of the gate, Cloud9 opted to select a composition with high-CC and heavy engage. 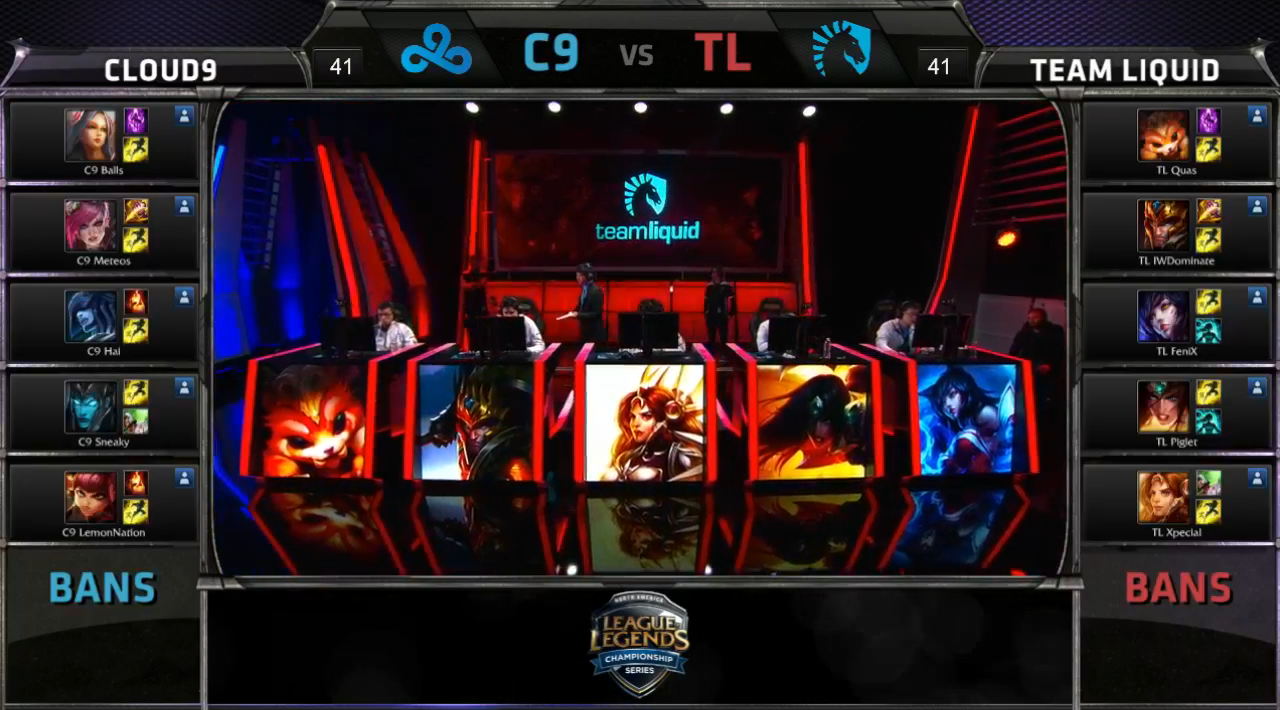 FeniX on Ahri would end up taking Ignite, not Cleanse

The combination of Vi and Annie on C9 would add a lot of lockdown to what was already a strong team fighting composition. Across the board, Team Liquid also have a hard engage with Jarvan, Sivir, and Leona.  With similar picks, the team that would get ahead early would be in a good position to snowball in future teamfights.

In addition, the engage on both sides offers opportunities to create picks by using hard crowd control.  Vision control and team-fight performance would likely be the factors that would decide the game.

Team Liquid would choose to look for a lane swap, sending their bottom lane of Sivir and Leona to the toplane.  Predicting this decision, C9 would also send their bottom lane to match TL.  The Kalista / Annie lane contains both poke and a strong level 6 power spike. The combination of Kalista’s “Fate’s Call” with Annie’s stun-charged ultimate creates a solid engage with a lot of damage.

Cloud 9’s smart play would allow Sneaky and LemonNation to follow Piglet and Xpecial when they switched to the botlane, giving C9’s botlane a heavy lead in minions killed. While Quas on Gnar and FeniX on Ahri would stay ahead in their lanes, the deficit between TL and C9’s botlane would only increase.

At the 15 minute mark, the only losing lane for Liquid would be the bottom lane of Piglet and Xpecial.  Setting up an early dive with Vi, and after that a Fate’s Call / Summon: Tibbers combination onto Piglet would net LemonNation two early kills on Annie.

Sneaky’s substantial 40 CS lead at 15 minutes forces Piglet to go for a build of Youmuu’s Ghostblade into Infinity Edge.  This build, while allowing Piglet to stay safe, means that TL’s primary damage source would not be dealing much damage until he could find more kills and farm.

Cloud9’s control of bottom lane would grant them two early dragons and the outer turret from each lane.  Shortly after trading kills in the midlane (Annie would secure the kill onto Ahri), Liquid would attempt to catch up with a teamfight in the toplane.

Despite a strong flash into “GNAR!” by Quas, C9 would win the fight 3-0.  The invulnerability from the ultimates of Lissandra and Kalista would give C9 the opportunity to re-position themselves and find kills onto Quas, IWillDominate, and Piglet. Sneaky would take a double kill, putting himself on the board with a score of 2/0/3.

Notice that, at this point, it was the play of Cloud9’s bottom lane paired with strategical thinking that would net the team a 5k gold lead and 2 dragons at 20 minutes.  The lane domination of Kalista and Annie would cause Piglet to be irrelevant and instead give C9 an incredible advantage in team fights.

This victory would allow C9 to take baron, and pick off IWillDominate during his steal attempt.  This would lead to another teamfight victory in order to grab a bottom lane inhibitor.  Through this play, C9 would be able to cleanly close out the game at around the 37 minute mark. 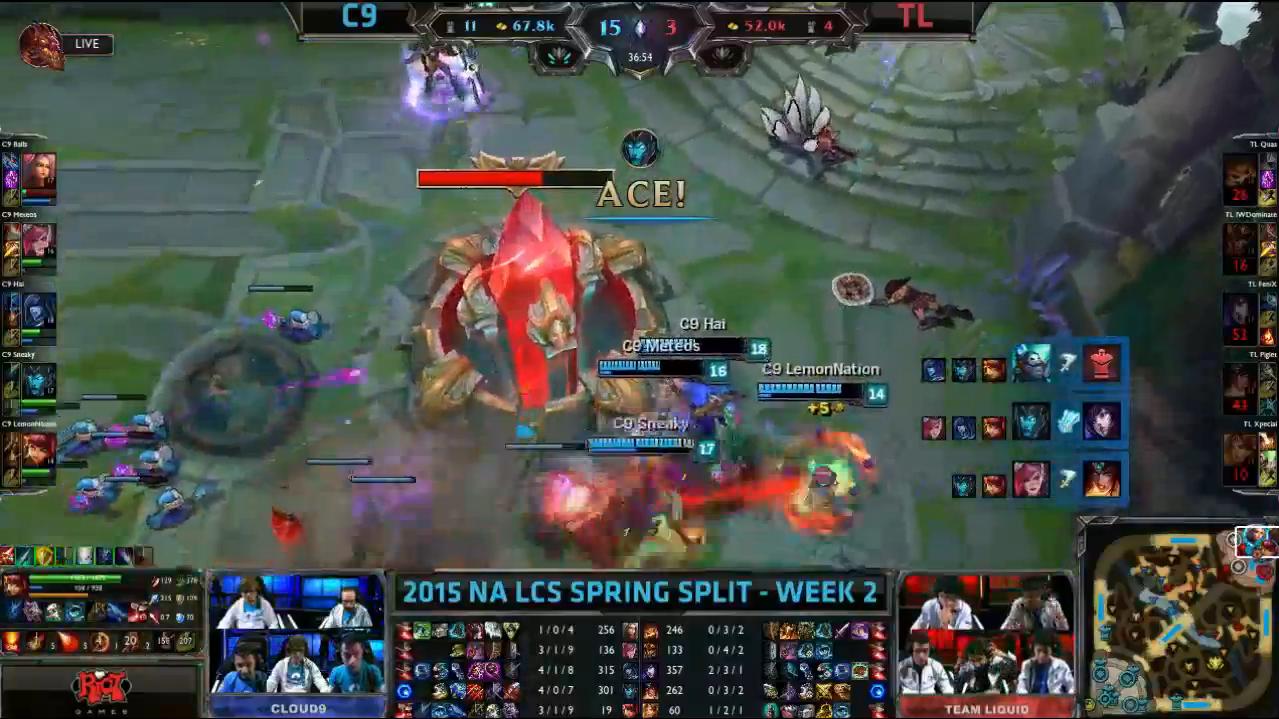 Cloud9 ends the game with only 3 deaths

Zachary “Sneaky” Scuderi absolutely stands out as the “MVP” of this game.  Utilizing an “under-played” champion to dominate the laning phase, C9’s botlane could successfully shutdown the new ADC & support pair from Team Liquid.  Piglet, while holding accolades for his play on SKT T1 in Season 3, was a vulnerable target during his first game of competitive play in North America.

With toplane going even and midlane being set only slightly behind for C9, Hai’s shotcalling and strong team-play allowed the entire team to get ahead due to Sneaky’s success in lane.  This brings up some concern, whether valid or not, that C9 had to rely on play from a single lane in order to snowball.  While their laning phase has never been exceptional, Cloud9 is known for successful dragon fights or early objective control to create leads that are eventually snowballed into teamfight victories and map control.  As seen in C9’s games vs Gravity and Team SoloMid in Week 1, the squad was unable to claw back into games when being set far behind in laning phase.  Whether or not this is a legitimate concern is yet to be known, however it might take some time until Cloud9 returns to the level that they were at in previous seasons.

A loss early in the week might be disappointing for the Liquid team that went undefeated in the week prior.  However, the debut of Piglet with limited practice with the team in North America justifies the defeat.  Being heavily out-picked and rotated, alongside being surprised by the strength of the Kalista / Annie duo stands as fair reason for why Liquid might not be the “#1 team” that they were made out to be by fans after their initial week of play.

“People [are] overreacting way too much to our 2-0 first week. We beat 2 mid-level lcs teams that also had subs, we haven’t done shit yet” –@LiquidDominate, January 27th 2015

The above tweet from IWillDominate before the week of play sheds some additional light on the result of the game.  While TL had a strong opening week, they did have a relatively easy schedule in comparison to their schedule of C9 and TSM in Week 2.  In addition, it’s expected that it will take time for Piglet to adjust to competitive play in North America.

C9’s victory would improve their record to 1-2 on the split, and would drop Team Liquid to a record of 2-1.  The rest of the day’s matches would see TL tie with Team SoloMid, Counter Logic Gaming, Team 8, and Gravity in first place.  C9’s victory would tie them up with the rest of the teams for 6th place.  Read Colin Nimer’s full breakdown of the NA LCS 2015 Spring W2D1 here.

Whether or not Piglet and Xpecial improve their synergy, Cloud9 continue to play well, or if the standings will separate are all questions that need to be answered in the coming weeks.