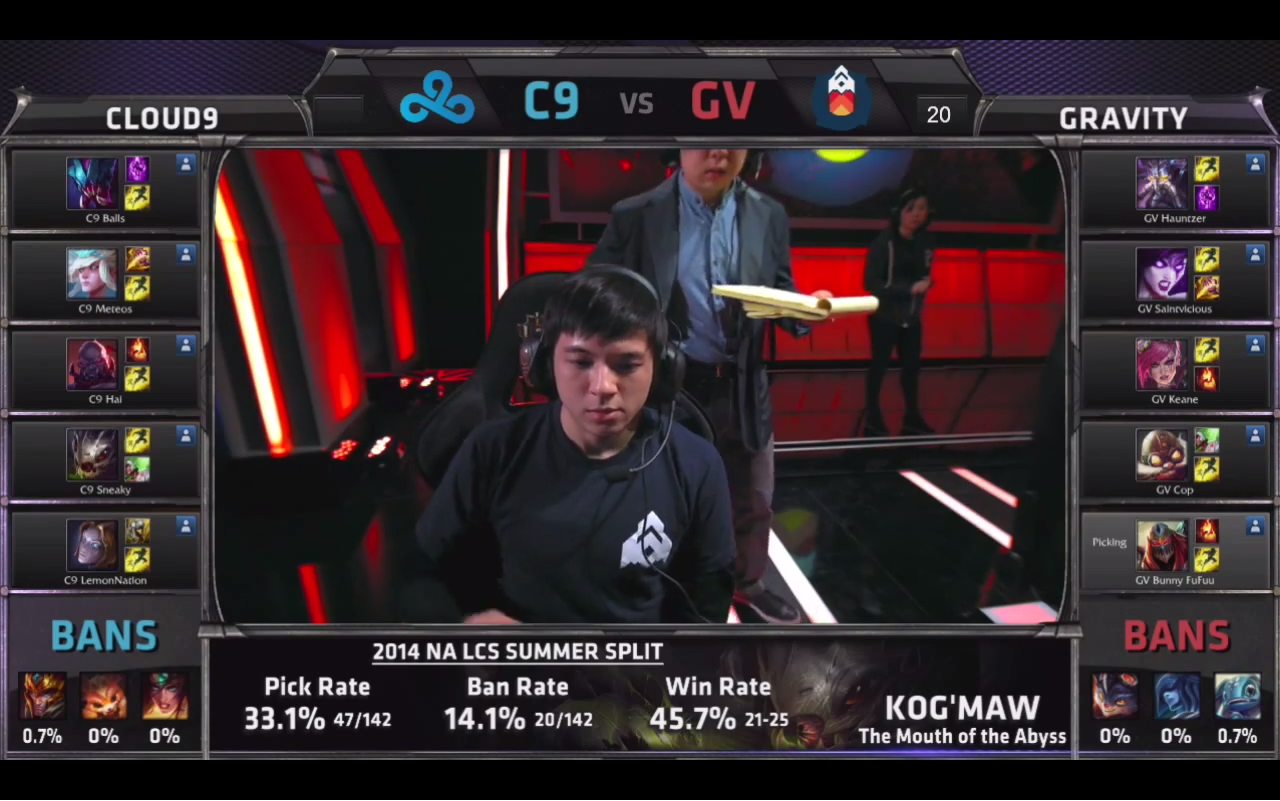 It is no understatement to say that Gravity was the underdog coming into their week one matchup against Cloud 9 after a devastating loss the the Winterfox substitute team. The Gravity team had looked shaky in their first set, and seemed unable to match the rotations from ShorterAce and Gleeb that had essentially won the game for Winterfox. However, in their game against Cloud 9, Gravity showed the level of planning and strategy that they are able to put into the game starting at the champion select. Let’s look at the pick/ban phase in order to fully analyze what the teams’ strategies were and why Gravity’s was superior.

Starting from the bans, Gravity needed to make sure that Zed and Kassadin couldn’t be dove on or locked down in any major way. The Rumble and Lissandra bans guarantee that Balls and Hai cannot lock down their back line or create an AoE teamfight. The Fizz ban could easily be replaced by something else like an Ahri or a LeBlanc, but due to the previous day we know that Hai plays Fizz and his mechanics didn’t look fantastic, so it’s safer to ban the champion that, based on the knowledge we have, we think he feels more comfortable on. It should be noted that Cloud 9 also unknowingly dug themselves into a hole with the Jarvan and Gnar bans. I assume the thought process was that Gravity would ban away Rek’sai towards the end and they place a higher priority on Janna then they do Kassadin, Gnar or Jarvan but based on the composition they came up with I strongly disagree with the choice.

With all of the major team-fight threats banned away, Cloud 9 felt as though they had to lock in the Rek’sai, but I feel as though that wasn’t the best option due to the lack of reliable engage. Meteos has shown that he has a solid Lee Sin in the past, but the mental game of the OP pick being left open. With Gravity’s first picks, they pick up Kassadin and Morgana. The Kassadin pick seems fairly obvious as it has been a priority pick throughout North America, plus it was a vital piece of the composition, so it had to be picked then. Some people were wondering about the early Morgana pick, but I feel that it was necessary to take it away then. LemonNation loves the champion, and if you take it now you force Cloud 9 into a weird position where they have to choose between Janna, Thresh and Annie.  Because there were so many damage and team-fight threats taken away in the pick ban, plus Sneaky’s good performance in their first game, Cloud 9 picked the Janna to guarantee that Sneaky had some peel and disengage, rather than picking a champion with stronger engage. Thresh would have been a stronger pick overall, because while he may not have the same level of disengage as the Janna, he still does the job, and gives more engagement options to the Cloud 9 team.

Along with the Janna, Cloud 9 picks Sion in the next round, and I think this was the right choice. With Maokai disabled, and Rumble, Gnar, Kassadin and Lissandra taken away, his only real options are Sion and Dr. Mundo. Sion has a better lane match-up vs. Kassadin, and while it is incredibly unreliable, he has a very strong engage if he can land his ult. Without the Morgana or a jungler with reliable engage for a teamfight, Cloud 9 desperately needed something that at least had a chance to get them set up for the fight. On the other side, Gravity takes Corki and Vi. While I was watching the picks live, I was questioning the Vi pick over Lee Sin, but after watching the game, Vi was the best choice. Cloud 9 has a pretty immobile team for the most part, and with no real damage threats picked yet, and the Janna locked in, one could fall under the assumption that they were going to run a protect the ad carry comp just based on the champions that were left up. With Sivir banned and Corki taken away, and the need for a lot of damage and carry potential, Sneaky’s only real choices were Graves, Kog’Maw and Tristana, all of whom can be caught out and locked down by the Vi pick. Vi also prevents the Janna from efficiently disengaging the fight due to Assault and Battery ignoring all cc. The Corki pickup helps the comp with poke damage, to essentially set up guaranteed kills for the Zed and Kassadin.

Last round of picks, Cloud 9 confirms that they are going for a full protect the ADC composition as they pick the Kog’Maw and the Orianna. I mentioned earlier that Cloud 9  was essentially left with Graves, Kog’Maw or Tristana. The reason that you pick Kog’Maw over Tristana or Graves is that Kog’Maw has higher carry potential when there aren’t other major damage threats on the team. Tristana and Graves excel at coming in and cleaning up teamfights, while Kog’Maw can do lots of mixed damage from extremely long range, and can carry as long as he has strong enough peel. Cloud 9 essentially are putting all of their eggs in the Orianna & Janna peel, which wound up failing them. On the Gravity side, Zed is the obvious choice. It can get to the back-line relatively easily, Zed is difficult to trap in a Shockwave due to how slippery he is. Beyond that, he gives the option of a split-push if Cloud 9 plays extremely safe and doesn’t allow teamfights to happen as often as Gravity would like.

After the champion select, we have two radically different compositions: A protect the AD Carry composition revolving around a Kog’Maw, with Janna and Orianna as the primary peel for the team, Sion for a strong front-line and a possible engage, and a Rek’sai. I can’t stress enough that I think Rek’sai was a really bad choice and Gravity did a fantastic job baiting out the pick. Rek’Sai excels when she can support a team-fight and use her Tremor Sense to catch people out, but who on this Cloud 9 roster has the potential to assassinate? No one. On the other side of the rift, we have a dive comp centered around Zed and Kassadin, with Vi and Morgana for lock-down, and a Corki for long range poke. Gravity’s composition is a hard counter to Cloud 9’s as long as Kassadin, Corki and Zed don’t get hit by a shock-wave then get shredded by Kog’Maw.

While there were definitely things Cloud 9 could have done better in the game, including patience with the Shockwave and Sion’s build, I feel that they lost the game due to Gravity’s coach Souldra helping his team craft a really strong composition right from the first ban. While I don’t think this week was a good indication of any team’s strength, Gravity’s pick/ban phase was incredibly impressive in this game and I can’t wait to see more of them as the split progresses.