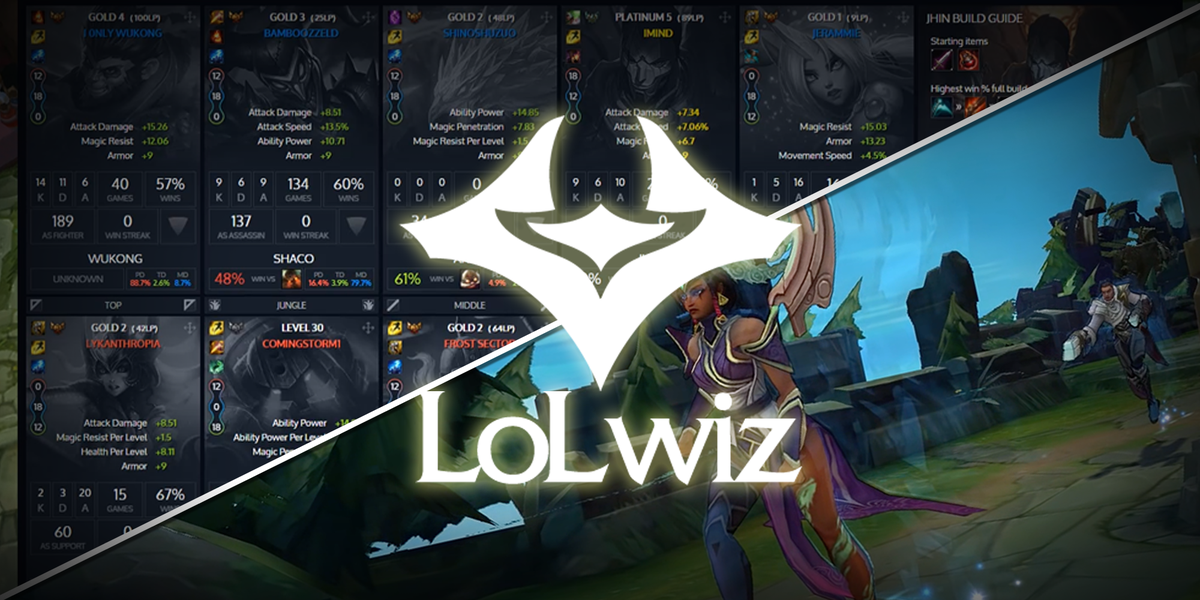 “This article is brought to you by LoLwiz — The No. 1 in-game stats app.”

At this point it’s clear that one of the fundamental ways you can up your skill in League of Legends is through advanced analytics. Dozens of pro teams keep numbers guys on staff so they can break down win percentages, build efficiencies, and draft strategies on a deeper, more mathematical level. But unfortunately, a lot of those more technical processes are locked away from the average player. Unless you yourself have a degree in sabermetrics, or you happen to be on a professional team that keeps one on staff, you’re pretty much destined to play in the dark.

That is, until now. LoLWiz is a third-party app for League that aims to give you a ton of information at the drop of the hat. It’s simple: Once you hit the loading screen after the draft, you’re presented with a comprehensive breakdown on each player you’re up against. You will get an overview of the champion your opponent has chosen, and an outline of the percentage-based general matchup against whoever you’re playing. You’ll also get a breakdown of their runes, giving you ample time to diagnose any glaring oversights. Lastly, LoLWiz presents you with a greater itemization of each player’s individual skill level—their winrate and K/D/A over their past 10 games as the champion they’ve selected, and their overall season stats, which should give you a good idea if you’re duking it out with scrubs or a few closeted Diamond II lifers.

LoLWiz also gives you some customly written advice too, in case you’re matched up against a champion you’ve never played against before. (If this is your first time in a lane with Zoe for the first time, you’ll get a handful of tips to get you ready.) You’ll additionally get the full item build with the highest win-rate for your champion, in case you’re messing around with a free-to-play rotation guy that you’ve never played before. This is especially important for a game like League, where new champions are getting added all the time, which in turn constantly shakes up the metagame.

LoLWiz is also entirely within the rules of the game. The company has a compliance notice with Riot posted directly on its website, which makes sense, given that the application is scraping information that’s available publicly, and is booting on the Overwolf platform, which was specifically designed to give players information that was previously sourced through alt-tabbing in the middle of a game, (we’ve all been there right?).

There’s plenty of major endorsements too. Zachary “Sneaky” Scuderi is an avowed LoLWiz user, as is the fan-favorite Marcus “Dyrus” Hill, and Christian “IWDominate” Rivera (“Spotting the trolls just got easier than ever!” he says of the product).

LoLWiz is available for free, right now, directly from its website. If you’re serious about upping your League game, you owe it to yourself to give it a shot.