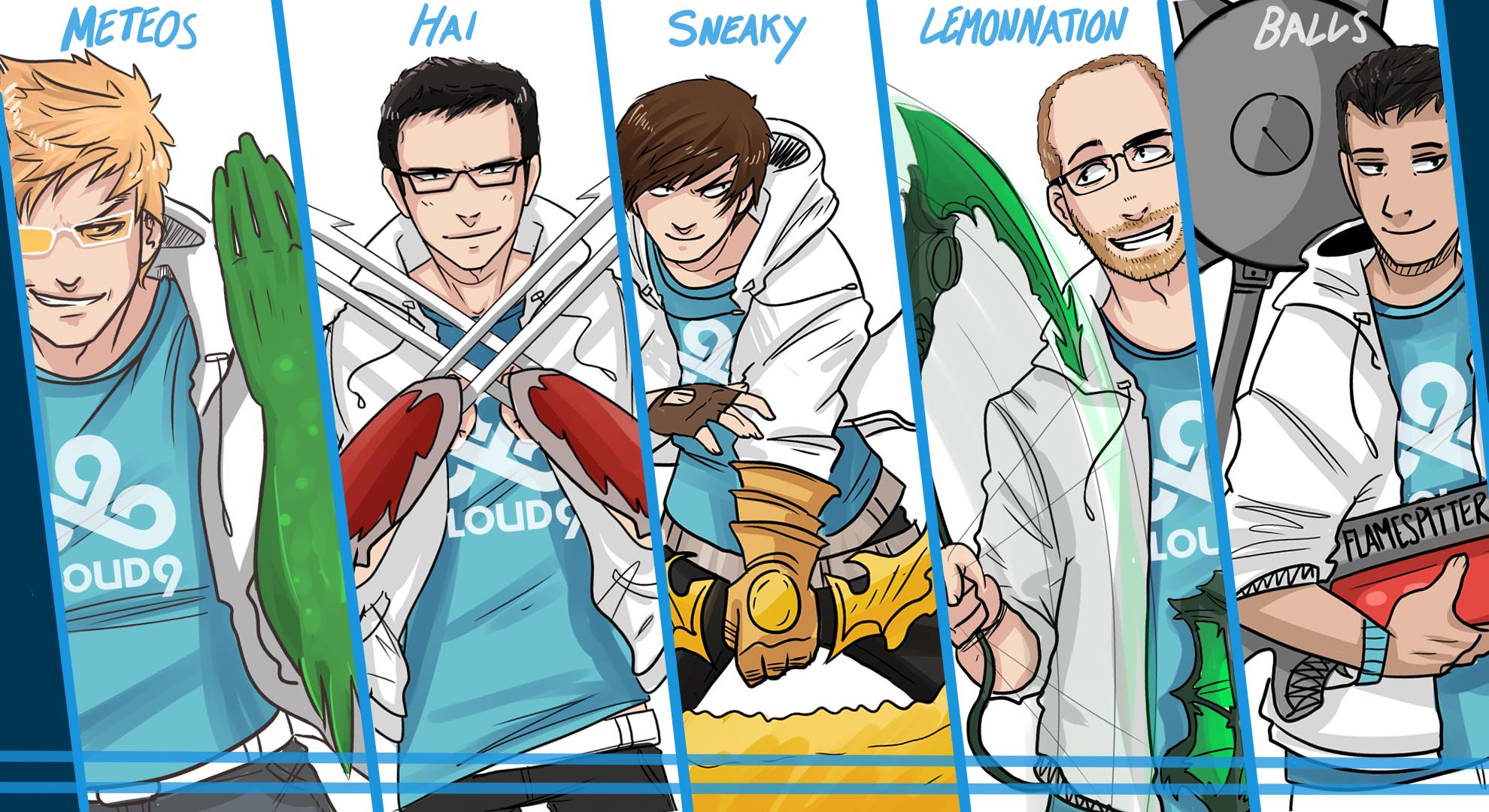 Before they would go 49-7 in their first two splits in the NA LCS, before they would become two time North American Champions, and before they would find international success, Cloud9 was a challenger team. And at first, not a great one. Led by jungler Hai “Hai” Du Lam, C9 would fail to qualify for the first ever split of LCS by falling to Team MRN in a base race. With WildTurtle at ADC, Yazuki in the top lane, and Nientonsoh in mid, the team would nearly disband after a crushing defeat. With only Hai and support LemonNation returning, the team would rebuild with Balls in the top lane, normal-game star Meteos in the jungle, and later SnEaKyCaStRo at AD Carry. Hai would move to the mid lane, setting up a roster with the goal of qualifying for the 2013 Summer Split.

“I wouldn’t say I had too many expectations when I joined Cloud9. They asked me to join as the jungler, and then Hai locks in Master Yi and says “Oh by the way, I’m jungling… you go mid.” I somehow first blooded Pobelter playing the super OP Kassadin at level 5, by myself. From then I realized the guys were super troll but also super good at the game.” – Meteos for HyperX’s 20 Questions

At first, the team would consist of relatively unknown players. Meteos had found success in normal games and was dragged into C9, while Balls and Sneaky had found little success playing on Challenger teams. Being acquired by Quantic Gaming around this time, the team would have to attempt to create an atmosphere worthy of the LCS.

Quantic’s road to the LCS was paved primarily paved through dominating victories and limited losses. Along the way to the 2013 Summer Promotion tournament, the squad would take down Curse Academy in a 8 minute victory en route to an NESL Pro Series VI Victory.

In their early stages, the team would thrive around early rotational play and their laning strengths. Hai’s assassin champion pool and Meteos’ Zac & Nasus play would allow the team to continually take objectives across the map. While jungler Will “Meteos” Hartman is now primarily characterized as a farm-based jungler, his ability to efficiently find gank opportunities while keeping a high CS count can be seen clearly in their challenger play.

Quantic also appeared to be significantly ahead of the meta in comparison to North American Challenger (and LCS level) teams at this time. The team would seemingly take champions that were seeing high priority in eastern regions for free. Characters such as Jayce, Kha’Zix, Zac, Zed, and Kennen were rarely prioritized by most North American teams, letting C9 get away with ridiculous drafts at no cost. After an MLG Dallas victory, the team would qualify for the Season 3 Summer Promotion tournament.

The 2013 Summer Promotion tournament would see Quantic take on on Team Astral Poke: a small challenger team featuring NydusHerMain and Bobbyhankhill. Kha’Zix and Zac would both go over to Hai and Meteos, letting the team cleanly close out both games in twenty minutes.

After taking down TAP, QTC would have to take on compLexity Gaming: the LCS incumbents. Quantic would send Sneaky and Lemon to the mid lane, quickly pushing down the mid tower before swapping back to the bottom lane. From here, Hai would find three kills onto coL Pr0lly before the 12 minute mark, taking objectives around the map in the process. Winning Game 1 in 23 minutes, QTC would sweep coL 3-0 after winning every game in under 30 minutes.

After qualifying for the LCS, the former roster of Quantic would be acquired by the former manager of Team SoloMid: Jack Etienne. Etienne would also revert the team’s name back to Cloud9.

Top of the Food Chain

“I think, back then, people were just weak laners. They didn’t know how to lane correctly. People also didn’t know how to team fight and rotate. So one of the reasons that we were so far ahead [of the competition] was because we would always come out ahead when rotating. We could also just come back from behind in games by winning dragon fights based around our mid game power spikes.” – Balls for HTC’s Recall with Thorin

Cloud9’s unprecedented success in the NA LCS would be welcomed by the League of Legends fan base. The team would go in a 13 game win streak during their first split, only dropping games to Counter Logic Gaming and Vulcun throughout the summer. This was partially due to Hai’s shot calling and partially due to the entire region lacking strength during Season 3.

As stated by top laner An “Balls” Van Le, the region was behind at laning, team fighting, and rotating. Cloud9 was able to bring an advanced, polished play style to NA that was never seen to the same extent in the region.

An average Cloud9 game would feature a strong pick & ban phase led by Daerek “LemonNation” Hart, followed by early jungle pressure, turning into a solid laning phase. Although their early game was actually scrutinized by the community. C9 would often fall behind in games where their early game moves would be predicted and countered. The teams’ strengths revolved around their mid game rotational play and team fighting: usually around a 10 – 15 minute dragon.

C9’s team fight synergy was peculiar of a younger team. While this was partially due to Hai’s strong shot calling, there also was an unspoken synergy between the players. Meteos said the team once scrimmed without speaking to each other whatsoever: just to improve the team’s play in skirmishes.

Following the summer split, Cloud9 would qualify for the Season 3 World Championship. Receiving a Round 1 bye due to their North American victory, the team would have to face Fnatic in their first ever international match.

Fnatic would be the first team to push C9 to their limit in a “best-of” series. Using a double teleport strategy in Game 1, FNC would prove to be too much for C9 to handle. Although strong team fighting would win the second game for Cloud9, they would get demolished in a Game 3 with a kill score of 2-to-26 after losing multiple members in the early game.

Despite dropping in the Round of 8, Cloud9 had pushed a European powerhouse to the limit after only debuting as a professional team not even four months earlier.

The Impact of Hai’s Leadership

While all of C9’s players had proven they deserved a spot in the LCS, their rise to the top of North America can primarily be attributed to Hai: the team’s shot caller and in-game leader. Although his mechanical prowess would be scrutinized later in his career, he could have easily been considered as the best mid laner in North America during C9’s first split.

Hai’s instincts and game knowledge would help him be by far the greatest shot caller in his region. Lam would often sacrifice his own strength to aid his team strategically, leading the league’s mid laners in wards placed per minute, losing out in damage and CS for vision.

On paper, Cloud9’s instant success was incredibly puzzling. A team containing five players with limited experience playing professionally had set an LCS record by winning nearly 90% of their games. The only other team to do something similar would be Europe’s Moscow 5: later to be renamed as Gambit Gaming. The Russian team had been taken players with little competitive experience to become arguably the best team in the world during Season 2.

Many words that were used to describe the play style of Moscow 5 could also be used to describe Cloud9 during their prime. M5 had game instincts, strong team fighting, and used innovative strategy to dominate teams both domestically and internationally during Season 2.

Although Cloud9 would begin to struggle later on in the team’s lifespan, their initial rise in North America would see incredibly polished play from a rookie team. Even during challenger tournaments, the team would use incredibly well polished rotational play to take full control and consistently close out games early.

Despite the fact that C9 may has changed since their initial run in the North American scene, they set a standard for how teams should be built and tackle domestic competition. Cloud9 took advantage of the region’s lack of strategic and mechanical skill and helped raise the bar for what a strong North American team should look like.

[Thanks ohnips for image, Oracle’s Elixir for stats]