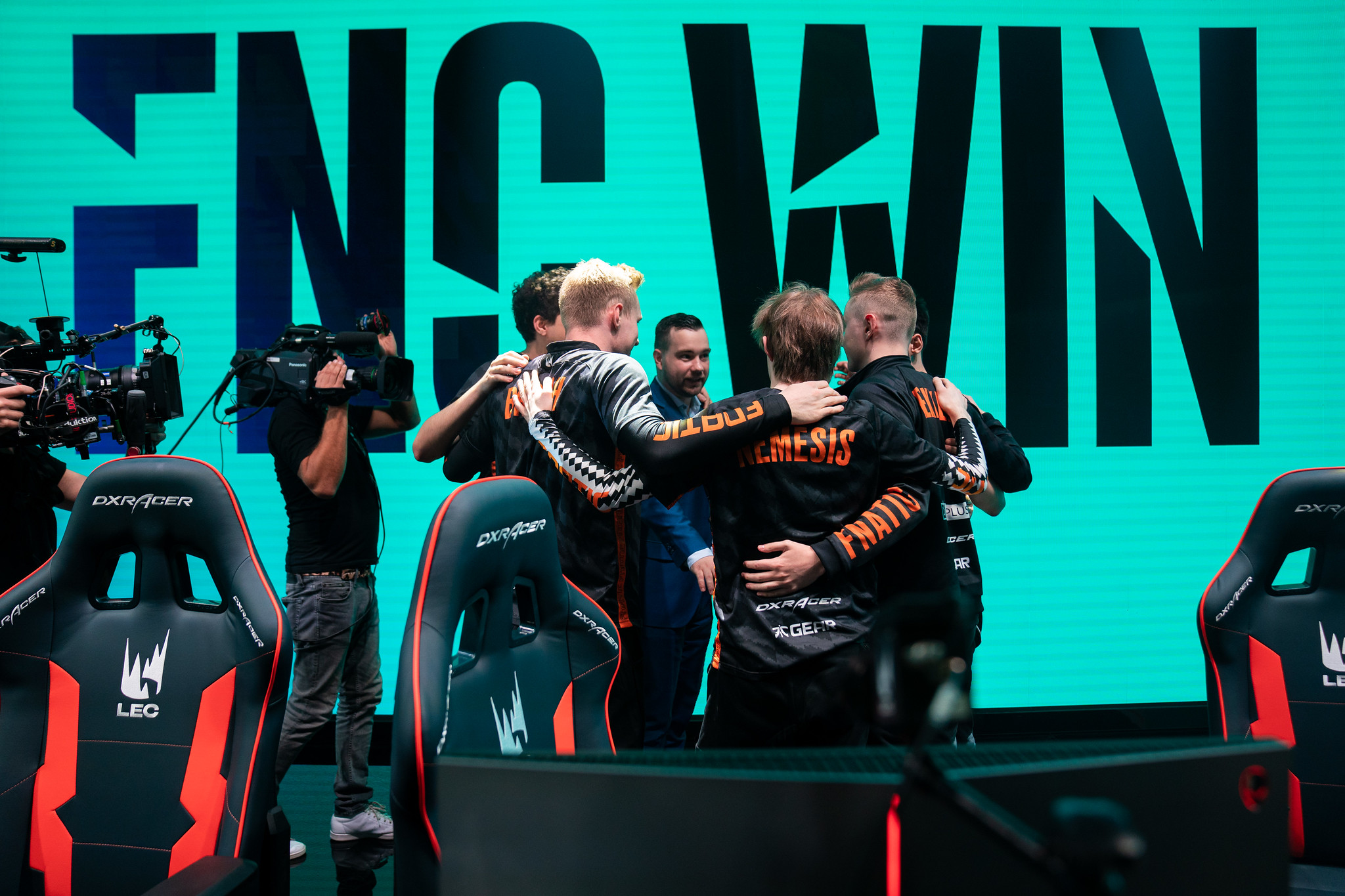 It’s hard to make it to the Worlds final. It’s even harder to make it there twice. Only once in the history of League of Legends esports has a team that lost in the final made it back to the tournament at all.

But that team was Samsung Galaxy in 2016. After getting thoroughly beaten by SK Telecom T1—the ending 3-2 map score belied how strong SKT looked in the series—Samsung came back in 2017 with a vengeance. But through most of the LCK season, it just wasn’t enough to beat SKT.

But then, at Worlds, something clicked for the team. For one thrilling best-of-five, Samsung were the better team and they dismantled their fiercest rivals in a clean 3-0 sweep.

Sound familiar? It should, because Fnatic are looking to do the exact same thing this year.

Fnatic and Samsung are some of the most storied teams from their respective regions. The Samsung sister teams of 2014 are still considered by many to be the peak of professional League. And before the rise of G2 Esports, Fnatic dominated Europe, racking up title after title and going undefeated in the 2015 Summer Split.

Both faced doubts along the way. As an organization, Samsung had to completely rebuild following the 2014 title. Other than the sponsor, the team that won in 2017 had almost nothing to do with that original squad. They had players like jungler Kang “Ambition” Chan-yong who had swapped positions just to make things work.

Ambition seemed to be on the tail end of his career and Samsung did try out other junglers. When they got to the Worlds final in 2016, they weren’t supposed to really contend. Many people considered the real final to be SKT’s previous match, a tense five-set thriller vs. ROX Tigers that could be the greatest series ever played.

Fnatic have faced similar trials. From the start of the EU LCS in 2013 through 2015, the team won a slew of championships. But in 2016, G2 started playing in the big leagues, and overnight, Fnatic’s luck changed. Over the last four years, G2 have become the one team Fnatic just can’t beat.

Even at Worlds last year, some considered G2 the better LEC squad. Fnatic had an easier path to the final and didn’t really hold a candle to Invictus Gaming once they got there. It felt like once again, the biggest test for IG came in an earlier round against a Korean team, this time kt Rolster in the quarterfinals. After IG beat them 3-2, they swept G2 and Fnatic with a combined 6-0 map score to earn the Summoner’s Cup.

The parallels between Fnatic and Samsung go deeper than just storylines and history. Even the way they play seems rooted in commonalities. For years, Fnatic has been built around bot laner Martin “Rekkles” Larsson, one of the most consistent carry players in the history of Europe. Rekkles was never considered a mechanical genius along the lines of Konstantinos “FORG1VEN” Tzortziou, and he doesn’t have the champion pool of G2’s converted mid laner Luka “Perkz” Perković. But he does know how to deal damage when his team needs it.

Samsung’s Worlds team was also built around a bot lane that was never really considered the best in its region. It’s not that Park “Ruler” Jae-hyuk isn’t a great player. It’s that his penchant for “safe” ADCs like Varus and Ashe hid the true value he provided for his team as a damage source but also as a primary form of engage. Samsung became great when they figured out how to unlock Ruler.

To some, credit for that comes from other sources. The team took a crucial step forward in 2016 when it inserted substitute support Jo “CoreJJ” Yong-in late in the season and he found a special kind of synergy with Ruler. Then in 2017, the Ardent Censer meta helped inflate Ruler’s damage numbers. But at the end of the day, that all would’ve been for naught if Ruler couldn’t get it to actually work. In the 2017 final, SKT gave Ruler the ultimate respect by picking Varus away while giving him better meta ADCs like Xayah. Ruler still had the last laugh—he finally got Varus in the third game and solidly outplayed his counterpart, SKT’s Bae “Bang” Jun-sik, to lead his team to victory.

Rekkles will need that type of moment if he’s to finally win Worlds with Fnatic. Rekkles is one of the most tenured players left in this game. Like Ruler, he’s had to grow and evolve his champion pool. This season, he’s even playing Karma and Garen, a big departure from his past style.

A big part of why Rekkles has been free to experiment is due to what Fnatic are doing on the other sides of the map. After years of focusing on Rekkles to an absurd degree, Fnatic have found success doing the opposite. The same thing happened with Samsung. By the time Ruler got Varus in that 2017 series, he had a 2-0 lead because his top laner, Lee “CuVee” Seong-jin, absolutely wrecked SKT.

Korea has produced a lot of legendary top laners over the years, but CuVee isn’t really considered one of them. He was the OG Samsung player, having joined them in 2015 just after the dissolution of Samsung’s Blue and White sister teams. He was the team’s best connection to its past.

Fnatic top laner Gabriël “Bwipo” Rau is a very different player. After Fnatic started playing him on stage in 2018—ironically in Rekkles’ role—he immediately established his bona fides as Europe’s next rising star. He played so well that Fnatic dropped longtime veteran Paul “sOAZ” Boyer to turn the top lane over to Bwipo full time. Unlike the unflappable CuVee, Bwipo’s highs are incredible but his lows are sometimes hard to fathom. Since he entered the roster, Fnatic have made playing through both mid and top lanes a huge priority, which either enables Bwipo to carry or leads to disaster if he’s behind.

Taken as a whole, Fnatic have become more of a coin flip overall in the image of Bwipo. A pair of 3-2 losses to G2—including a reverse sweep—were agonizing for the team’s fans. But there’s also hope in those performances. Remember, once upon a time, Samsung also couldn’t beat SKT. But when they finally had to, when there was no other choice, they did it.

We like to analyze those games and find out the reasons why a certain outcome happened. But the truth is, sometimes these highly-competitive series between teams of the highest caliber simply come down to a coin flip. If you flip that coin enough times, it’s bound to come up heads eventually. Samsung got it in 2017 and Fnatic are banking on it at Worlds this year.