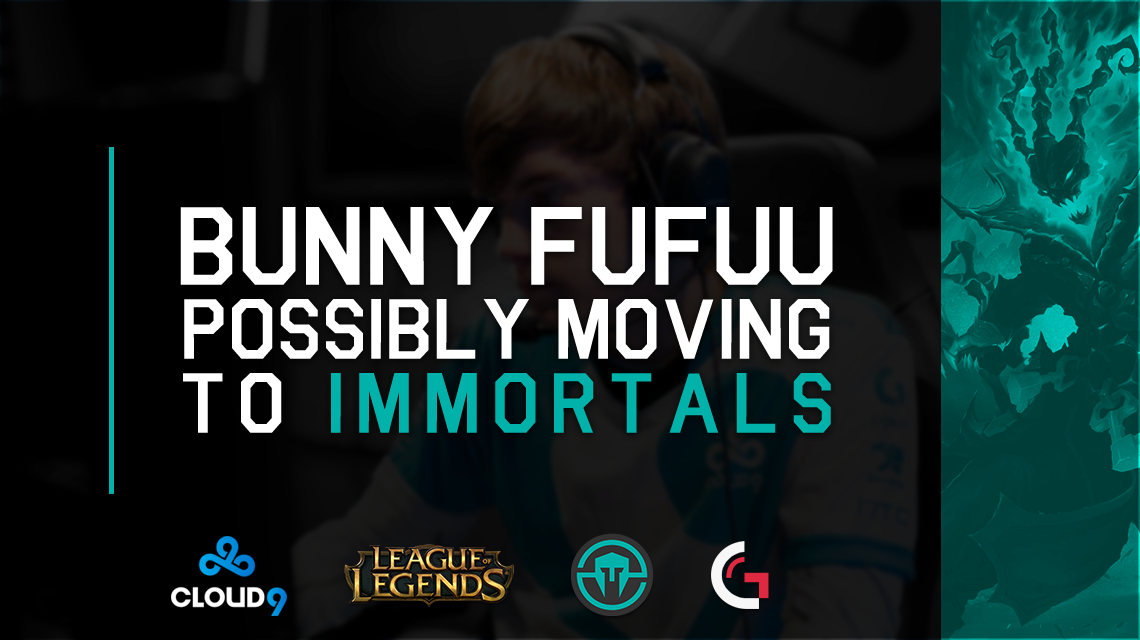 Michael “Bunny FuFuu” Kurylo, the former Cloud9 support player, now has rumors surrounding him about an apparent move to Immortals. Kurylo was splitting time in the Cloud9 starting lineup with Andy “Smoothie” Ta, but it was announced that starting in week seven of the North American League Championship Series, Smoothie would become the full time support for Cloud9, leaving Bunny FuFuu on the bench.

The conspiracy began when Jun “Dodo” Kang, the Immortals General Manager and team chef, messaged Kurylo through a private message on the League of Legends client. The message then showed up on Bunny’s chat box, which was being streamed to his Twitch audience at the time. Below is a transcript of the quick exchange of messages between Dodo and Bunny FuFu.

Dodo: “Hey Bunny, when are you moving into the house?”

Bunny FuFuu then began to type and send a period over and over again in the LoL chat to clear the messages off the screen.

The current Immortals support is Adrian “Adrian” Ma. It seems unlikely that Bunny FuFuu would take over the starting role from Adrian, seeing as Immortals is currently second in the LCS standings with only one loss to the undefeated Team SoloMid. If they did replace Adrian, it would be a case of fixing what is not broken, which I do not see likely from Immortals.

What is possibly more likely is bringing Bunny FuFuu on as a substitute, and begin to, like many other teams, utilize substitutes more. Having the ability to flex in players that play better with certain compositions would be a nice advantage to have.

It is worth noting that Adrian plays more squishy and mage focused support champions such as Karma, Nami, and Soraka. On the other hand, Bunny FuFuu has played more tanky support champions like Braum, and of course, his specialty Thresh. It would open the door for more diverse playstyles for Immortals. There is also the possibility that Bunny FuFuu gets put onto an Immortals challenger series roster in the future.

Current Immortals support Adrian tweeted this out after this story began to pick up traction.

Shortly after that, Dodo replied to the tweet saying the following.

@IMTAdrian when are you moving out of the house

Anyone that knows Adrian knows not to read into his tweets too much as he is known for his jokey style of social media posts, especially taking into account the Dodo response. I remind everyone reading this that at the moment it is all rumors and nothing official has been said by Immortals, Bunny FuFuu, or Cloud9.