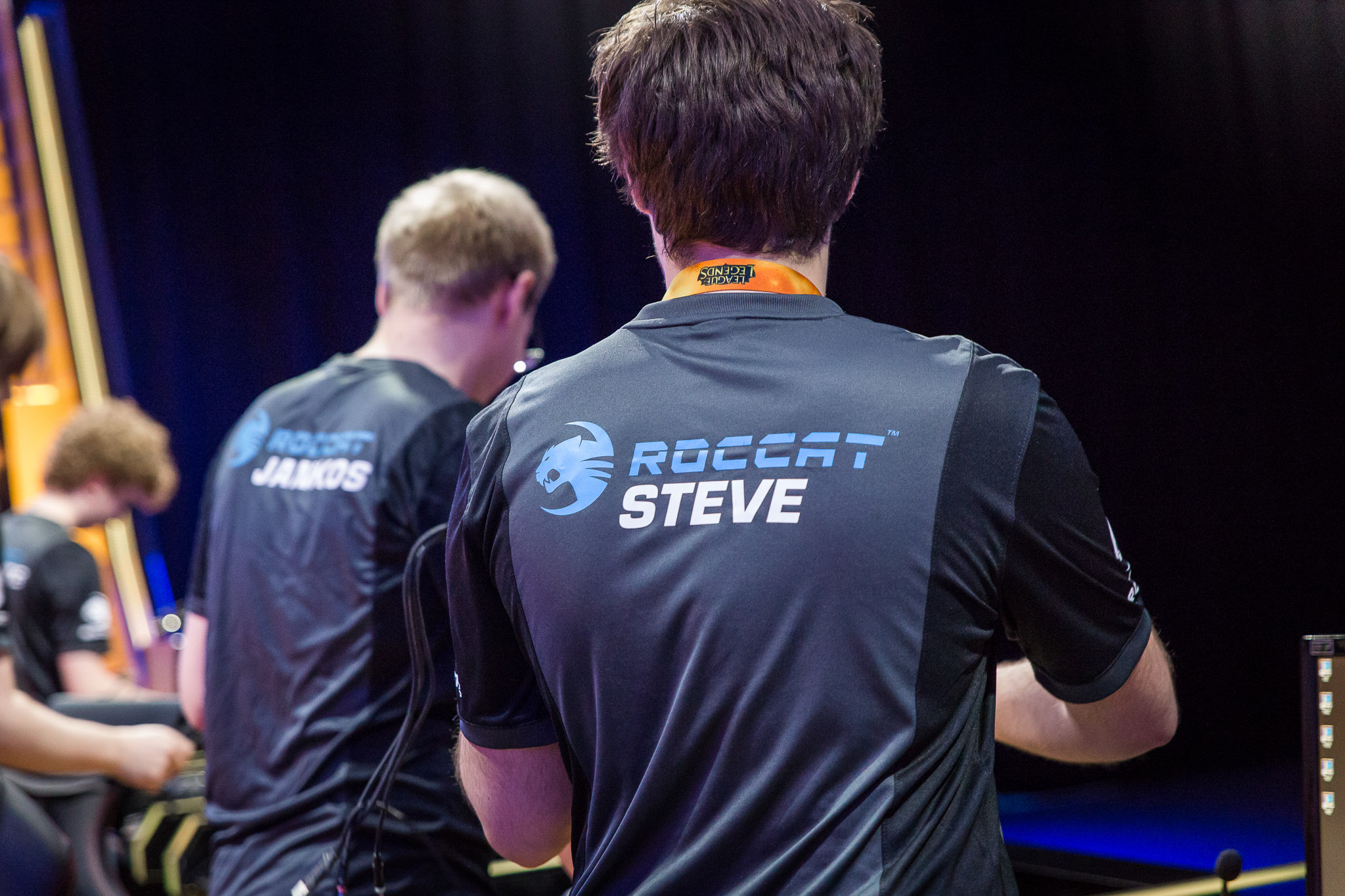 After whitewashing the competition the backdoor king xPeke’s team Origen is looking like a true super team, and a contestant for the number one spot in the European LCS. Origen is currently outplaying their opponents both at the macro and micro levels of the game. Their win record is against H2K as well as the Unicorns of Love, which claimed third and second place respectively in the previous split.

However the lower bracket team Roccat convincingly handed Origen their first defeat yesterday. Understanding how Origen plays is essential to beating them. Origen’s playstyle revolves around a controlled early game until their sidelaners achieve item and level power spikes. When the power spike hits, they start fighting a 4v4 or a 3v3 botlane, where they get kills and transfers them into towers or dragons. They tend to laneswap when they have a weaker lane, until Origen feel their botlane is strong enough to compete with their opponents. They usually end the laneswap by taking the top turret, and rotate their botlane together with their jungler Amazing to get dragon control.

While Amazing helps out the sidelanes, xPeke is often put on either a utility or a safe farm mage. That way he will need minimal help from Amazing, and he will be relevant in the midgame, as long as he can keep up in farm. xPeke’s job is to contain his lane opponent. That allows Origen to fight freely in the sidelanes. If a fight would break out, xPeke is the one who can get the fastest to the sidelanes, without having teleport, which allows for more map control.

It takes roughly 1 minute for the GFYs to load properly

Amazing is the key to Origen’s success. Origen can snowball out of any of their three lanes, but it is Amazing who allows them do to so. Amazing’s positioning and map pressure permitted Xpeke to play aggressive and shut down Ryu’s Kassadin in Origen’s game versus H2K. Their sidelane snowball is crucial to how Origen wants to play the midgame. This is where Origen shines.

They move around a group with four people to threaten objectives, while using the 5th player to manipulate the minion waves. Usually Soaz who can join the fights using teleport. However when the enemy minion waves are pushing in, they switch to a 1-3-1 formation. Having Soaz and Niels in the sidelanes, gaining sololane experience, while the remaining three members hold the midlane and respond to their opponent’s movement on the map.

Same thing happened when Origen were up against Unicorns of Love. They won the 3v3 botlane as well as the laneswap. While not being massively ahead, Origen’s map rotations slowly pushed the snowball into motion, and it was accelerated by making the Unicorns fight Origen on their terms. Mithy is Origen’s second carry. Aside from being the main shotcaller he is also the one who sets up and initiates the teamfights.

By continuously forcing fights on their terms, and taking objectives where the enemy team is either outnumbered or not defending, they amass a gold lead that increases exponentially. Eventually the walls of the enemy base cracks, and the nexus falls. It is a high pressure style that works well when ahead, but it has two weaknesses. It relies on the early game being won, and it does not work when behind, which is exactly what happened in Origen’s game against Roccat. With Origen playing a low wave clear composition versus Roccat’s Sivir, triple damage threat composition, Origen had to win the early game, needing that gold lead to siege and dive turrets in the midgame. Origen wins the lane swap, got a turret and a dragon out of it, while xPeke is safely farming up in the midlane.

Thus far, it looked like a standard Origen game. But at ten minutes into the game Origen is at their weak spot. They have one player in each lane, with Amazing and Mithy roaming, preparing for their next objective. But neither sidewave is pushed onto Roccat’s half of the map, which means the map pressure is not there yet. In this position, where they lack global pressure and vision around the dragon, Roccat’s support player, Vander, gets the engage on the lone Amazing and Mithy in the jungle.

With both of Origen’s playmakers down, the sidewave pressure is wasted. Origen cannot get anything out of it, and xPeke on Vladimir cannot push down the midlane turret while Roccat goes for dragon. Then, three minutes later, Amazing and Mithy are caught out once again, this time by Roccat’s jungler and adcarry, Jankos and Woolite.

Origen’s playmaking duo can be tracked through the minion waves on the sidelanes and Niels position on the map.

At the time of the fight Origen are positioned with four people around the midlane, and with Niels in the toplane. Amazing and Mithy are moving into the redside jungle above Baron to secure vision for Niels, so he safely can push out the toplane. If Roccat had not caught Amazing and Mithy, we would likely have seen a push on both the mid turret as well as the top inner turret, and then have Amazing and Mithy walk into Roccat’s blue side jungle and fall off towards the objective they want to take. Predicting Origen’s next objective, through Niels positioning, and hence where Amazing and Mithy will move allows Jankos and Woolite set the trap that stops Origen in their tracks. Losing the midgame, Origen tried a desperation engage on Roccat, outnumbered 3v4, at twenty minutes.

This is the play that costs them the game.

Had Origen been ahead, they might have scrapped through this fight, but they were down 1000 gold, and engaged outnumbered on the four fed members of Roccat. That becomes the story of the game. For the rest of the match Origen continues to play like if they were ahead, and Roccat’s gold advantage increases gradually fight by fight. Kills allows Roccat to secure more dragons and turrets, which leads to a Baron and that leads to Origen’s nexus going down at 31 minutes.

Origen’s own high pressure style lost them the game because the two cogs that allows the style to work, Amazing and Mithy, broke before Origen’s destructive machinery went online. It should be remembered though that it is still early in the season, and Origen still has plenty of time to add more plays to their playbook, and the analysis is made with the reservation that the sample size is small. We have already seen that Origen can snowball out of any of the three lanes, and have good macro play when ahead. They are already looking like a top two EU team. If they develop a second style that allows them to play from behind they will be mighty dangerous at worlds 2015.

To sum it up, what roles does the Origen players have on the team?

Soaz is a carry together with Mithy and Amazing. He does not have the damage output of xPeke, but in terms of game relevance he does more. Soaz usually comes out ahead from his lane, and then uses that advantage together with teleport to setup the minion waves on the side and fight the 4v4 botlane.

Amazing is Origen’s early game carry. His positioning on the map controls how aggressive Origen’s lanes can play. He controls how hard they can punish their opponents, and is essential for getting the botlane ahead. The key to beating Origen is winning or coming out even in the early game, and to do that you have to shut down or contain Amazing.

xPeke plays utility and farm mages. The goal is to free up Amazing to win the botlane. However as a triple threat team, Origen can very well snowball out of the midlane as well. When xPeke did play an assassin, Amazing allowed him to shut down Ryu for the entirety of the game. xPeke is Origen’s backup card. If they do lose or goes even in the early game, his job is to at the very least go even with his opposing laner, and carry Origen through the midgame. He did not succeed versus Roccat due to low wave clear, but the story might have been different on another champion.

The primary damage dealer. The rookie has the highest percentage damage dealt on the team together with xPeke, but Niels is not the carry. He has two jobs. Manipulate the sidelane minion wave that Soaz is not at, and staying in the backline in teamfights, dealing damage over time, while the rest of Origen soaks up enemy cooldowns. He could not carry Origen with a gold deficit versus Roccat, but that loss comes down more too bad macro play rather than Niels own plays.

Mithy is the team’s secondary carry. Aside from doing the shotcalling and being a mechanical monster, he is also the one who set up the picks that allows to snowball through the midgame. He is the main initiator in teamfights, and have thus far favored engage supports. We have yet to see him on a peel support like Janna or Nami. The exception is Alistar who can initiate teamfights, and then fall back for peeling, while the secondary initiators wreak havoc.