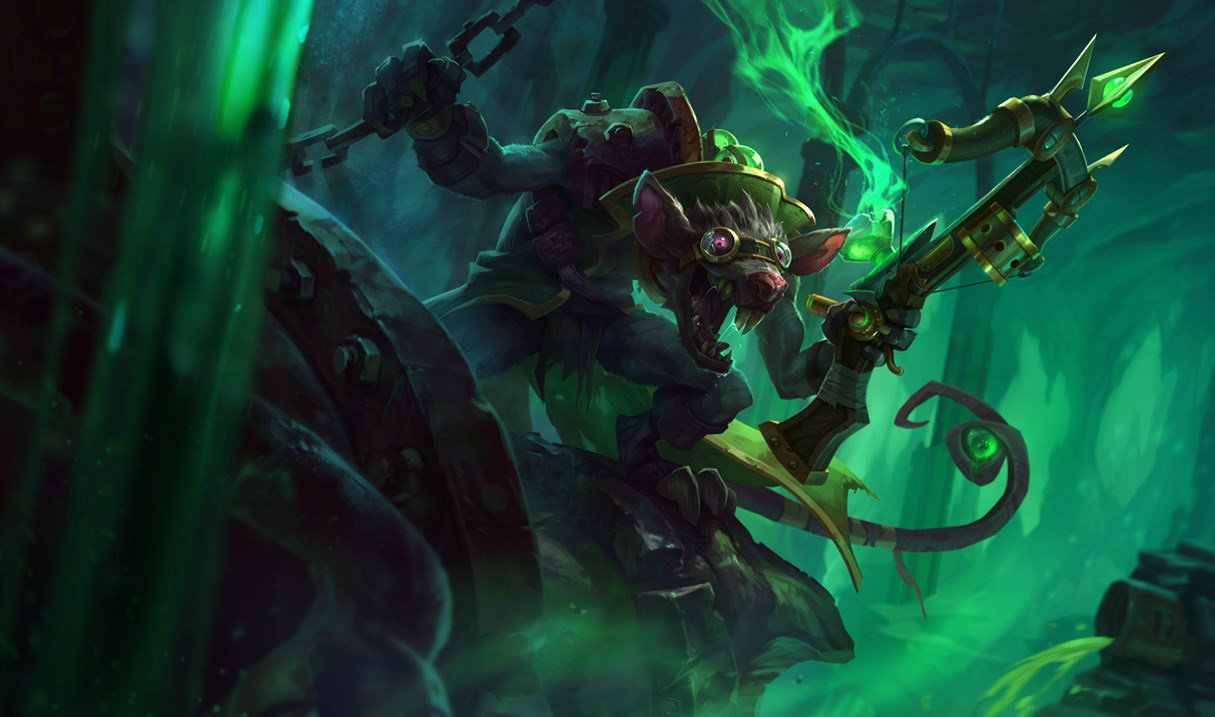 Twitch’s job in League of Legends is simple: sneak around in the shadows and ambush your prey. For years, he’s dominated solo queue across various Elos with these two simple tactics. Yet thanks to some newfound combinations in the bot lane, Twitch is back on the professional stage.

The camouflage associated with Twitch’s Q, making him unseeable unless he is near or around enemy champions, control wards, or turrets, makes Twitch a map-wide threat once the laning phase is over. Add a Yuumi strapped to his back, who also receives the same camouflage effects when attached to Twitch in his Q, and Twitch is able to dish out near-uncontestable amounts of damage at a rapid pace.

While Twitch’s resurgence at the top of the meta is mostly due to his synergy with the Magical Cat, pairing Twitch with enchanters like Lulu and Karma also reaps similar benefits. Since it’s likely that Twitch will be the recipient of nerfs in the near future, players should take full advantage of his strengths while they can.

Here is the best build for Twitch in League.

Lethal Tempo: Twitch gains an ample amount of range when he uses his ultimate, though that leads to massive inconsistencies when his ultimate is on cooldown. With Lethal Tempo as his keystone, Twitch is rewarded for constantly basic-attacking enemies with range that can become even greater than what he attains with his ultimate. This keystone and his ultimate stack together, allowing Twitch to shred through clusters of enemies safely from afar.

Presence of Mind: Twitch’s W, which applies multiple stacks of his passive in a short duration, costs a ton of mana from level one onwards. Combined with the need for Twitch to be using his Q and E often in and out of lane, he quickly drops to low amounts of mana if he isn’t careful. Presence of Mind works with the attack speed and range of Lethal Tempo to provide Twitch with ample mana regeneration for a short duration upon attacking enemies.

Legend: Alacrity: Attack speed is one of the most important aspects of Twitch that players need to focus on. Each time that he attacks an enemy, he applies a stack of his passive that deals true damage over a short duration. Therefore, with enough attack speed, he can apply full stacks of venom in seconds, then pull it all away with his E. With Legend: Alacrity, Twitch will passively gain more attack speed for simply laning as normal, which will stack heavily into the late game.

Coup de Grace: Just a few auto attacks from Twitch will leave enemies susceptible to further damage from his E and oftentimes force them to head back to base. If Twitch is capable of capitalizing on them before they back away, Coup de Grace will provide him with a large boost of damage to enemies that have low health, ensuring he gets gold for his efforts.

Taste of Blood: Like nearly all ADCs, Twitch’s defenses are very low. He will constantly be low on health at even the slightest poke from enemy laners, especially if he is caught off guard. Taste of Blood is a good option for resolving this issue at most points of the game, providing Twitch with some healing for attacking enemy champions that scales with his level.

Treasure Hunter: The faster Twitch can buy his items, the better. Even with one item, Twitch’s damage becomes considerably higher and separates him from other ADCs. By occurring stacks of Bounty Hunter, which are obtained each time Twitch gets his first kill on an enemy champion, Treasure Hunter will provide him with a large chunk of gold to get those items he needs for his power spikes.

Doran’s Blade: As the standard item for most ADCs, Doran’s Blade provides Twitch with a small boost to his AD, as well as some initial life steal. This is especially important against enemy poke supports and team compositions that actively look toward the bottom lane for ganks.

Health Potion: Twitch players must keep an eye on their health during the laning phase. If paired with a support that is unable to heal or shield them, Twitch’s health will quickly deplete if players aren’t careful. Luckily, Twitch rushes items that provide him with more life steal, so this is only a temporary solution.

Stealth Ward: While he may be an ADC, Twitch’s ability to sneak around the map without being seen makes him a great champion to ward with. Players should coordinate with their supports to point out the best spots to keep an eye on in the laning phase and keep them warded as often as they can, possibly even warding a deep flank other champions can’t get to as easily as Twitch.

Blade of the Ruined King: Twitch should not rush a Mythic item in most cases. Instead, Twitch should immediately build a Blade of the Ruined King, providing him with a large amount of AD, lifesteal, and the capability to steal opponents’ movement speed. The passive of this item also grants Twitch additional on-hit damage, which pairs nicely with the extra passive damage already included in his passive itself.

Kraken Slayer: The current meta build for Twitch uses the high-risk high-reward Kraken Slayer rather than Immortal Shieldbow. At the point that players build this Mythic item, they will already have a decent amount of attack speed, allowing them to proc the third-attack damage bonus of Kraken Slayer often. This can be done even easier if players use Twitch’s Q before attacking since leaving the camouflage gives Twitch an extra burst of attack speed.

Runaan’s Hurricane: This item can single-handedly allow Twitch to take down groups of enemies with ease in seconds, but should never be built first. With Blade of the Ruined King and Kraken Slayer already in the hands of players, Runaan’s Hurricane will give Twitch access to dealing massive damage to surrounding enemies while applying Twitch’s passive to all of them at once.

Berserker’s Greaves: Attack speed boots are the best option for Twitch to further increase this important stat. But if poke damage becomes unbearable to the point where players can’t efficiently scale, they should consider Plated Steelcaps or Mercury’s Treads.

Infinity Edge: Kraken Slayer and Runaan’s Hurricane add up to a total of 40-percent bonus crit chance, which up to this point has not been the most important stat for Twitch players to be focusing on. Yet with these two items, Twitch can now efficiently build Infinity Edge, boosting his crit chance to 60 percent and activating its passive of providing more crit damage.

Lord Dominik’s Regards: One of the many things Twitch does well is shred tanks. Unfortunately, tanks scale almost as well as Twitch does into the late game with multiple armor-granting items that make them nearly unkillable for most champions. With Twitch’s high late-game attack speed and a Lord Dominik’s Regards (or its incomplete version, Last Whisper), Twitch players can shred through tanks as if they were squishy mages. But players should be aware of their positioning against tanks since many are capable of getting up close and preventing him from dealing spread damage.