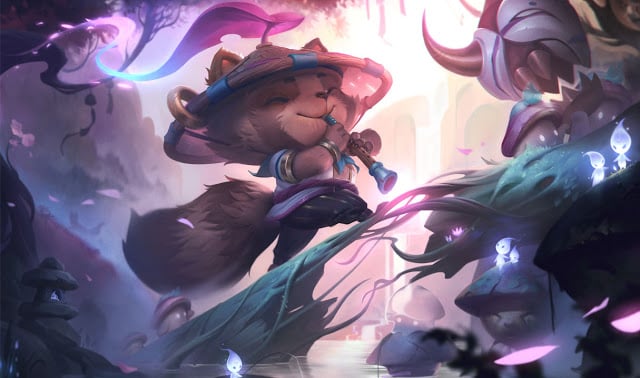 Everyone’s favorite Yordle Teemo might get a lot of criticism online for being a “meme champ,” but this is most definitely not the case. The top lane champion excels due to his skillset being favorable in many of the matchups the player may find themselves in.

As with any champion, different items are going to compliment the character’s kit more than others. While Teemo is quite versatile and can work well with a series of different builds for different situations, here is the best build for another who wants to begin playing the champion today.

Summon Aery: This ability is going to see Teemo’s attacks send out Aery to deal damage when used against enemy champions.

Manaflow Band: The Manaflow Band grants Teemo 25 bonus mana—up to 250 total mana—every time he hits an enemy with an ability, allowing him to remain in lane for a greater duration of time.

Gathering Storm: This rune is going to grant Teemo additional AP every 10 minutes.

Ravenous Hunter: Perfect for ability-based champions, Ravenous Hunter allows Teemo to heal for 1.5 percent of the damage dealt by his abilities.

As with any ability-based champion, you’re going to want to start with an item that will enhance Teemo’s ability power. The Doran’s Ring is the perfect item for this as not only will it boost the champions AP but it will also give him bonus health and mana regen. The Ring’s passive ability will make Teemo’s basic attacks deal an additional five physical damage to minions, making it faster and more effective to get that early minion farm.

Always a great item to take early in the game, health pots are an effective way to remain in the lane after an altercation with an enemy. Regenerating 150 health over time, a health potion will enable Teemo to remain in lane and farm for the maximum time possible. After purchasing the Doran’s Ring for 400 gold, it’s a no brainer to collect two health potions with your remaining 100 starting gold.

Anyone who has seen Teemo played knows how annoying his toxic shot can be—not to mention the Noxious Trap mushrooms he can implement once he reaches level six. Both these abilities can be greatly enhanced once Liandry’s Torment has been built.

Boasting two unique passives, this item is extremely powerful. Madness increases the damage dealt to champions by two percent every second until combat is exited. Torment will deal spell damage that burns the enemy for 1.5 percent of their maximum health per second for three seconds doing bonus damage to opponents whose movement is impaired. The item will also give Teemo a health boost adding 300 health to the champion.

Pairing this item with Toxic Shot will just increase the damage it deals over time to the opponent that is hit. Toxic Shot is extremely powerful as it is a passive ability once it is acquired and adds the bonus damage to Teemo’s basic attacks without costing any mana.

Attack speed is going to be the most important mechanic when playing Teemo, since chaining together as many basic attacks and leaving as much damage over time as possible is going to be key in finding success with the Yordle.

Nashor’s Tooth is an item made perfectly for Teemo due to not only the 50 percent attack speed increase but also the 80 ability power it provides. This will increase the damage and speed of Teemo’s auto attacks once he has acquired the Toxic Shot ability. This item will also make pursuing enemies with Teemo easier than ever as you activate Move Quick, Teemo’s ability that increases his movement speed.

Movement speed is one of Teemo’s biggest assets that can be utilized to pursue or evade enemies. Sorcerer’s shoes are not only going to assist in both those regards but will also make Teemo’s abilities more effective in the later game as enemies begin to build magic resistance items to reduce his abilities damage.

These boots will add an additional 18 magic penetration allowing for Teemo’s abilities to remain dangerous against enemies who chose to build defensively.

As the game progresses you’re going to want to begin to build items that will increase the damage output from Teemo’s abilities. Morellonomicon is one of the best items for this purpose.

Adding an addition 70 ability power as well as 300 health, the item is going to give Teemo some extra durability that he will require in combat at the later stages of the game.

This item is perfect for Teemo’s kit as its passive abilities increase the champion’s magic penetration and inflict them with grievous wounds for three seconds, which greatly increases the damage Teemo can inflict on the enemy over time.

A necessary late-game item for Teemo, the Void Staff does many of the things other items in this build do however, it can be much more effective.

Adding addition 70 ability power isn’t the only thing the Void Staff brings, its unique passive makes Teemo’s magic damage ignore 40 percent of the target’s Magic Resistance. This is going to dramatically increase the punishing effects of Teemo’s abilities and force opponents to watch their step as they attempt to navigate around Teemo’s Noxious Traps. With the Void Staff, stepping on one of those is going to cost enemies a hefty amount of health and in some cases force them to retreat back to the base.

Probably the most well-known ability power item in the game due to its power and how long it has remained in the game without being changed, Rabadon’s Deathcap gives Teemo the strongest Ability Power boost in a single item available in the game today.

The item adds an additional 120 Ability Power as well as its passive ability to increase the total ability power the champion has by 40 percent.

This massive boost in ability power makes Teemo incredibly dangerous to engage and often for attack-based champions will result in them being eliminated before Teemo’s Blinding Dart’s effects have worn off.