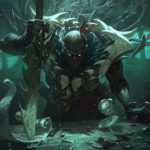 League of Legends’ latest ADC champion, Samira, recently hit the live servers and has been a breath of fresh air for countless ADC mains around the world. The champion’s unique skill set allows her to take risks, which redefines the good old “just play safe and farm minions” meta in the bot lane.

Samira has been a decent change for ADC mains, but the arrival of a hyper-aggressive champion also means that supports who embrace a playstyle around healing and shielding might need to reconsider their choices. As dangerous as Samira is, she doesn’t like staying on the frontlines and needs someone to set up plays for her. Given that she instantly got nerfed shortly after her release for being too overpowered, she definitely needs some help in terms of a supporting cast.

Support champions like Lulu, Soraka, Sona, Janna, or Nami work wonders to keep Samira alive through the mid and late game, but only if there’s a tank that can start engagements on the team. These supports don’t guarantee lane dominance, however, which is what Samira is all about. If your ADC teammate picks Samira, you’ll give them the best odds of thriving by busting out a support pick with a lot of playmaking potential.

Pairing Samira with a tanky support champion that has a stun can help her capitalize on enemies’ mistakes. This also reduces the need for a jungler to gank your lane to secure kills. You’ll still need to watch out for the enemy jungler’s movement, however, since overstepping into a trap can kill all of your momentum in the lane.

The main reason why Samira prefers a champion that can set up plays for her with crowd control (CC) is her passive. Daredevil Impulse allows Samira to knock enemies up for 0.5 seconds if they’re already stunned. This also causes her basic attack timer to reset, meaning she can dish out more damage. Considering she deals magic damage based on her target’s missing health when she attacks in her melee mode, CC abilities let her close the initial gap she’ll have against her opponents.

Here are the best support champions to pair with Samira.

Throughout our list of champions that compliment Samira the best, you’ll notice one common in-game mechanic that most of them share. It’s their hooking spells, the most challenging type of skill shot for some players while others can even land one with their eyes closed.

Though Pyke isn’t that tanky by nature, the aggression his kit provides is enough to make him one of the best partners for Samira. Bone Skewer is a great way to turn up the heat in the bot lane and Ghostwater Dive gives Pyke enough space to make mistakes. This means you’ll always have a path back to safety if you don’t overextend.

Phantom Undertow makes sure you seal the kills since Samira can dish out a considerable amount of damage in 1.25 seconds—and it gets even crazier after Pyke hits level six. When Pyke unlocks his ultimate, Samira and him start taking no prisoners and everyone they get their hands on ends up back in their base.

Alistar may be one of the oldest champions in League, but it’s still quite hard to match the overall impact he has both in the lane and throughout the game. The unmatched tanky characteristics of the champion become more of a threat with his engaging abilities.

Alistar’s passive is also a great tool to stabilize your position in the lane since Samira benefits nicely from passive healing. Alistar is possibly the most straightforward support champion to play on our list with his relatively elementary combo. We recommend not auto casting his Headbutt spell since it can end an engagement before it starts if cast incorrectly.

All you need to do is perform a Headbutt-Pulverize combo when the enemy oversteps and Samira should handle the rest. Make sure to activate Trample and use it on whoever you’re engaging on for more stun duration. Alternatively, you could also use it to secure a second kill if you believe your initial target is definitely going to get eliminated.

At level six, you’ll need to focus more on soaking as much damage as possible so Samira has the room to go in and out of a fight with little to no scratches.

All League players will be familiar with the difficulties of laning against a good Thresh. The champion’s playmaking ability increases the potential of any champion that he lanes with—and Samira isn’t an exception. Thresh’s unique ability to reactivate his hook to pull himself close to his enemy makes space for some instantaneous plays that he can capitalize on with his Flay.

Dark Passage also serves as an excellent escape tool for Samira when she overstays her welcome and provides a small shield that can make the difference in a close fight. Thresh’s ultimate compliments Samira well since the movement slow it provides gives the champion the time she needs to collect some stacks for her passive or land the finishing blows.

Dark Passage is also decent at giving Samira the space she needs in a lane where she’s getting constantly ganked. Since missing out on farm will be less than ideal for her, you can always keep your distance to get her out of trouble with your lantern whenever she gets ganked. While this won’t necessarily help her score any kills, she’ll still keep up in farm.

If you’re having a tough time landing hooks with champions like Thresh and Pyke, Leona is usually the middle ground that provides the same level of effectiveness but with a different style.

Zenith Blade is surprisingly easier to hit than any other hooking spell in the game and Leona actually prefers teleporting toward enemies due to her tanky nature. Synchronizing your basic abilities will net you 1.5 seconds of stun time, which Samira can use to go berserk on your enemies in the lane. This duration ramps up to three seconds when Leona hits level six. Her ultimate is also a great way to stop any ganks from happening alongside starting engagements.

Your lane should turn into a fight club after unlocking your ultimate with Leona since you’ll have the ability to set the stage for any type of gank. While Eclipse is a great way to dish out some extra damage, consider timing it right before you’d take damage since the tankiness it provides is one of the core elements that defines Leona.

Galio has been all over the map in recent years. He had his time in the mid and top lanes, but now he’s leaning a bit toward the bottom side of the map. He always had the potential to become one of the better supports since he has a nice crowd controlling kit, but other lanes just allowed him to scale better.

Galio is an excellent pairing for Samira by nature with his superb stats—and he also enjoys starting fights. Combining Justice Punch with Shield of Durand can mean a guaranteed kill with Samira by his side. He even has more to offer with Colossal Smash and Winds of War. The latter two provide the extra damage the duo might need to secure kills in the early game.

If the laning stage doesn’t go according to your plans, you won’t need that much farm to stay relevant in the game. Your ultimate will be enough to make you a threat to the enemy team in late-game teamfights.

Taric doesn’t dash forward or hook anyone like other champions on our list, but it’s quite challenging to dismiss the utility he provides to a lane in terms of healing and extra damage.

Though Samira can easily solo kill anyone on the map with enough farm, she doesn’t mind some extra help during the early stages of the game. Taric starts clubbing hard once he activates his passive, Bravado, and you may just find yourself chain stunning your enemies if you get enough hits in between your spells. Land a stun with Dazzle once you detect an enemy out of position and start hammering away at them alongside Samira.

She’ll be more than eager to overextend with Taric at her side due to the extra armor and healing that Starlight’s Touch and Bastion provide.

At level six, Cosmic Radiance unlocks a new world of possibilities for Samira. Two and a half seconds of vulnerability while Samira’s casting her ultimate increases the champion’s overall effectiveness in teamfights.

Playing against a Rakan main who knows what they’re doing can feel like a three-dimensional chess match, except you don’t know any of the rules. The champion’s ability to suddenly create chaos out of nowhere makes him a great partner for Samira—just don’t tell Xayah about it. Though the buffs Rakan receives when he’s paired with Xayah increase his overall strength a bit, he’s still perfectly capable of putting on a masterful performance without her.

Like all the champions on our list, Rakan comes with a nice supporting kit to make up for Samira’s weaknesses. Gleaming Quill is a decent source of lane healing and can help you land the killing blow in engagements, while Grand Entrance will be your bread and butter to start fights. The one-second knock-up will be enough to let Samira loose and it’ll only get better after level six with Rakan’s ultimate, The Quickness.

Samira will be able to dash forward to capitalize on the enemies you pull toward her. Once you start syncing in the lane using Battle Dance and Wild Rush, both champions’ dash spells will make your enemies feel dizzy. 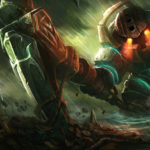 Though these two beefy boys have fallen out of the meta a bit, they’re still viable weapons in the right hands. Both of them have a hook that closes the gap and allows Samira to use her passive in the best way. Nautilus and Blitzcrank’s tanky stats and builds let them serve as meat shields for Samira, which she needs throughout all the stages of a game.

Nautilus’s kit allows him to be more flexible than Blitzcrank since the champion can also use his hook to disengage. A simple Dredge Line-Staggering Blow combo should be enough for Samira to unleash hell upon her enemies—and you’ll always have Riptide to slow down anyone who’s trying to make a run for it. The laning phase turns into a walk in the park for Nautilus after he hits level six as well since his guaranteed stun is one of the best ways to set up a kill. One trick you can try out is getting level six while you’re hiding in a bush and surprising the enemy with your first ultimate.

Blitzcrank possibly features the easiest hook shot in the game due to its projectile speed—and he has the potential to follow it up with a Power Fist, which knocks enemies up into the air for a short duration. Though Blitzcrank doesn’t scale well, you should be fine if you keep hitting hook after hook. A flash-Static Field play in the late game could help you secure objectives—and you can always peel for Samira to let her do the heavy lifting.