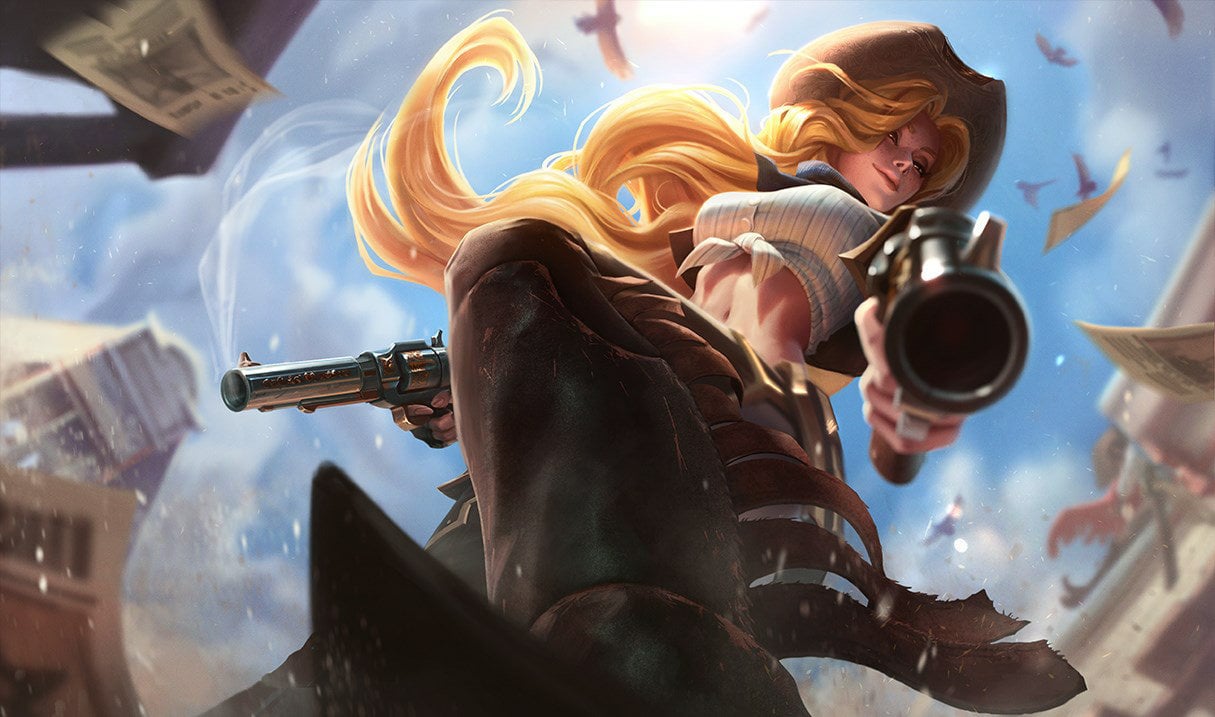 The bot lane meta changed entirely in League of Legends season 11. Champions who were not great picks in previous seasons leapt to the top of the ADC rankings over the past year. Of all the bot lane marksmen in the game, Miss Fortune has been a common choice due to the ease of her kit and her early-game power.

As goes for all champions in League, Miss Fortune will build different items to suit the situation she finds herself in during the game. But there are core items that will provide the best chance at securing victory with the champion.

Conqueror: At her core, Miss Fortune’s strength comes from her basic attacks. While she has abilities that deals great damage, these are mostly set up to finish opponents or assist her in catching an enemy with her basic attacks. Conqueror is a great rune to increase your overall damage output and give you a nice healing effect when fully stacked.

Presence of Mind: Miss Fortune uses her abilities to hinder her opponent’s movement or deal poke damage, so she is often going to find herself low on mana. While this is not the worst-case scenario for the champion, having no way to cast her abilities will hinder her ability to enter combat. Presence of Mind will increase her mana regeneration after hitting a champion, allowing you to have a full mana bar going into teamfights.

Legend: Bloodline: Taking down enemy units will see Miss Fortune gain stacks that in turn increase the champion’s lifesteal by 0.6. This number may not seem substantial, but this bit of lifesteal combined with the rest of the champion’s stats could be a defining factor in combat.

Coup De Grace: Miss Fortune is a champion who can wear down her opponents with her basic attacks before dropping her Bullet Time ultimate to close the show. Having Coup De Grace will increase the damage that Miss Fortune deals to low health opponents by eight percent.

Absolute Focus: Since you have a higher range than most AD carries in the bottom lane, you’ll be healthy most of the time. As a result, you’ll be able to have Absolute Focus up for the increased attack damage, which is crucial in poking your opponents during the laning phase.

Gathering Storm: The second powerful rune in Sorcery that you want to get is Gathering Storm. Starting from the 10th minute you’ll start getting a boost to your AD that increases over time. With most matches lasting around 30 minutes, you’ll have a decent 29 AD boost into the last teamfights which can be the difference between killing an opponent and letting him escape with a sliver of health.

The most popular choice in starting items for AD carry champions, Doran’s Blade is perfect for Miss Fortune. The item grants early stat increases including attack damage, lifesteal, and health. This gives Miss Fortune durability and extra damage that will provide her an easier way to farm in the lane.

Spending your remaining gold on a health potion is a great call for most champions. This is going to give Miss Fortune another way to heal off any damage she may sustain without the need to return to the fountain.

The easy choice in boots for AD carry champions, Berserker’s Greaves grant the same movement speed bonuses as many other boots while also including a 35-percent attack speed increase for the champion. This is crucial in helping you last hit creeps and poking down enemy champions in teamfights.

Kraken Slayer is the core Mythic item you should rush in most of your games since it’s easy to use and doesn’t require much thought compared to a lethality-oriented build. You’ll get additional true damage every third attack, while also getting 10 percent attack speed for every Legendary item you complete.

Once Miss Fortune has the ability to deal devastating damage, giving her the ability to to heal back health is a great idea. Bloodthirster facilitates this by granting the champion 20 percent life steal. On top of this, the healing will create an overheal shield that can block damage relevant to her level. The item also offers an 55 attack damage increase and 20 percent critical strike chance.

Essence Reaver is an amazing item in the later stages of the game to ensure that you have the needed burst to take a target down and never run out of mana. The item gives you 45 attack damage, 20 ability haste, and 20 percent critical strike chance for only 2,800 gold, making it a very gold efficient item.

If you are facing a composition with a lot of tanks or frontliners, then get Lord Dominik’s Regards to increase your damage by up to 15 percent depending on the health difference between you and your opponent. The item has a great build path, and you can even rush it early on if the enemy team has a lot of armor-stacking champions.

If you’re facing a heavy ability power-focused composition or a composition that has too much crowd control, then Mercury’s Treads is a decent alternative to Berserker’s Greaves. It will give you a nice amount of magic resist and tenacity to reduce incoming crowd control duration.

Plated Steelcaps is a decent boots alternative if you’re facing a composition with a lot of AD divers who want to kill you as soon as possible. Since you don’t have dashes or blinks, this is a decent way to make you harder to kill.

Building an armor item that can add durability is a great way to round out Miss Fortune’s build. The Guardian Angel not only offers bonus armor and attack damage but also a unique ability that will allow Miss Fortune to get back into the action after being eliminated. This works by reviving Miss Fortune on the spot with 50 percent health and mana.

Quicksilver is a cheap 1,300 gold investment to get Cleanse as an item. It can be a life saver against compositions that rely on picks. If you get stunned out of the blue in the later stages of the game, you can easily lose the game off that. Inesting 1,300 gold cavn help you avoid those situations.

If you feel like you need additional survivability, then Immortal Shieldbow is a good Mythic item to pick up instead of Kraken Slayer, though you’ll be losing quite a lot of damage in exchange. If there’s a certain priority target that can kill you, look into picking up Exhaust or Quicksilver Sash instead of giving up the damage from Kraken Slayer for this item.

Against champions that have a lot of healing, Executioner’s Calling is a decent early game 800-gold investment. It reduces the healing by 40 percent and gives you a nice item to upgrade to later on for powerful stats. It can be picked up against champions such as Seraphine, Soraka, Swain, or Sona to keep them under control early on.

If you went for a lethality-oriented build, then this item should be your priority, especially against champions that have a lot of shields or stack items to get a huge shield. It will allow you to easily penetrate them and deliver the killing blow through their big shield amounts.

If you want to forego the critical strike chance build and instead build lethality, then this item should be the first item you get. Eclipse is one of the best Mythic items available if you want to go for lethality, giving you a good stat boost and a strong passive to deal additional damage, also providing a shield and movement speed boost.

A great cheap item that you can get to increase your damage if you go for a lethality-oriented build. Manamune gives you a lot of mana, converts a part of it to attack damage and also gets converted to Muramana when fully stacked, giving a nice damage boost to your attacks and abilities.