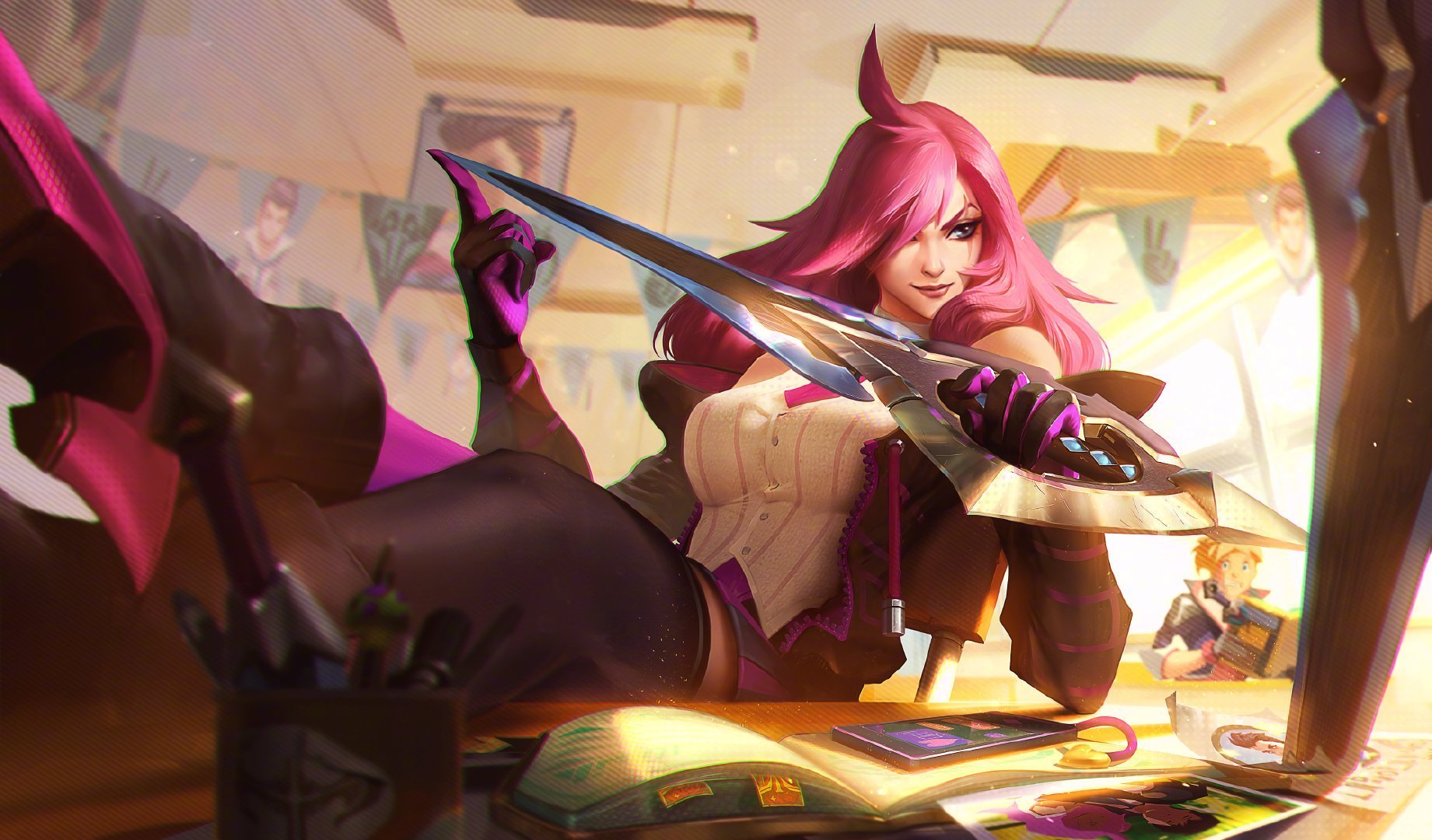 With the recent item rework in the current League of Legends preseason, players in the mid lane may have no idea what to build on their main champions. The items come with an abundance of new effects, names, and icons, making it difficult for players to know what’s best.

This list of mid lane builds should help you understand what each archetype from the mid lane should build, so that you can begin learning the ropes of the new build paths and climb in ranked once season 11 is live.

Runes didn’t go through significant changes. Domination is the tree to go as an assassin, but the secondary rune page is much more flexible. You can either go Precision to get some Tenacity, resolve mana issues via Presence of Mind, or pick up Inspiration if you want to start with a Corrupting Potion.

AD assassins benefited a lot from the itemization rework. It’s easy to get plenty of lethality now, and the items feel very impactful overall. Rushing Duskblade as a Mythic Item makes you overall stronger early on with the effect activatable at any time, unlike the previous iteration where you had to be out of the fog of war.

Mercury’s Treads: With so much crowd control in the game right now, this is the best option you can get for the boots slot.

Duskblade of Draktharr: This mythic item enables you to survive in teamfights easily by getting champion takedowns. It resets the cooldown of the effect, making you invisible for a brief period of time and making your next attack hit harder.

Youmuu’s Ghostblade: This is a great lethality item to make you move faster around the map. It also has a great active effect to help you chase down enemies in a fight.

Edge of Night: This is a decent defensive item with a nice spellshield effect. It allows you to engage on enemies with a small shield to block their first spell.

Serylda’s Grudge: This item is a must-have against armor-stacking champions. It grants you 30-percent armor penetration alongside 45 attack damage and 20 ability haste—three valuable stats. Its effect of slowing enemies for one second can help you easily finish enemies who attempt to escape.

Guardian Angel: While this item doesn’t have any lethality or armor penetration, it’s overall a great item to have, giving you a second life to slay enemies and win the teamfight.

Domination remains a primary tree for AP assassins, oftentimes accompanied by Inspiration for Time Warp Tonic. This rune allows you to sustain in the laning phase with ease against most champions as long as you start with the Corrupting Potion. If you want to go a more aggressive route, then you can go either Precision or Sorcery for the runes there.

While some champions lost Hextech Gunblade, an item which enabled them to become wildly strong, the latest items are a good compensation. There are other plenty of viable options for AP assassins.

Sorcerer’s Shoes: Sorcere’s are a solid choice to increase your overall damage. This is your core boot choice most of the time unless you are facing a lot of crowd-control, which you would need Mercury’s Treads to counter.

Night Harvester: This item is perfect for any assassin, because it allows you to deal a nice amount of burst damage on top of your kit every 40 seconds against enemy champions. It also grants you movement speed allowing you to engage and chase down opponents. The mythic bonus is great as well, giving you more ability haste with each legendary item.

Lich Bane: With so many popular champions who benefit from on-hit items in the meta right now, this item is a great pick-up when combined with Night Harvester. It allows your initial engage to be deadly in one-vs-one scenarios. It is also a great teamfight item, giving you a lot of bonus damage over the course of a skirmish.

Zhonya’s Hourglass: Many of your engages may be countered by crowd control. If you don’t have Zhonya’s, death will be imminent. But this item can buy you precious seconds to think about your next move, how to escape, or eliminate the primary targets on the enemy team.

Rabadon’s Deathcap: Arguably the best ability power item in the game, Rabadon’s Deathcap amplifies your damage once you have a couple of AP items. You can rush it as a second or third item if your game is going great.

Sorcery remained a core tree, with Arcane Comet being a great pickup to boost your overall damage. Transcendence was reworked to give you ability haste earlier on and reset your basic cooldowns by 20 percent once you reach level 11. The secondary tree is taken either Inspiration or Domination for the great runes. Inspiration is a decent pick-up if you want free Boots of Speed and some biscuits to help your laning phase early on.

While other archetypes got buffed, control mages are not among them. The lack of mana sustain in the core items makes it difficult for mages to stick around and spam their abilities like before. The removal of Rod of Ages alongside the Archangel Staff nerf has also affected a lot of champions, making them unviable for now.

Sorcerer’s Shoes: These increase your overall damage, making them a solid choice. This is your core boots, which can be rushed as soon as possible.

Luden’s Tempest: This item is great overall to rush. It is as strong as before with the mythic passive giving you a lot of magic penetration. The Lost Chapter component remained the same so it will solve your mana issues early on.

Chemtech Purifier: With the recent Grievous Wounds rework, there’s plenty of viable anti-healing items. Due to the nature of how many healing effects are now in the game, this is a cheap choice, giving you ability power, ability haste, and mana regeneration to help your mana issues.

Zhonya’s Hourglass: This is a great defensive item to prevent imminent death. Seeker’s Armguard was buffed, costing much less now, and can be rushed as a first item against heavy AD-focused compositions.

Rabadon’s Deathcap: This increases your damage once you have a couple of AP items. Having it is a core goal of every control mage who wants to do a lot of damage later on.

Going for the Precision tree and Resolve secondary has remained a priority for most bruisers. While you can pick up this rune page on pretty much any bruiser, the only change which would need to be done is picking up either Press the Attack or the Conqueror keystone depending on matchup and composition overall.

Bruisers have a lot of viable build paths now. Instead of having to rush Ravenous Hydra or Trinity Force, there’s plenty of options to make you feel like a fighter who wants to be in the center of the action. The addition of Mythic items has made bruisers strong in all departments, making them a great pick up in the middle lane.

Mercury’s Treads: With the amount of crowd control in the game right now, this is the best option you can get for boots slot. If you are facing a physical damage-oriented champion, feel free to pick up Plated Greaves instead.

Goredrinker: This mythic item gives everyone a Darius Q. It allows you to heal for a lot without channeling while also giving you great offensive stats. The combination of health, attack damage, ability haste, and the active effect makes this a very efficient first-item pickup.

Ravenous Hydra: While Hydra is slightly weaker due to no longer having an active effect, it is still a great item, giving you ability haste now instead. With Goredrinker benefiting from ability haste, this makes Hydra a great second item pickup.

Black Cleaver: While the item has lost the movement speed effect, it is still a great pickup. It has a new effect to allow you to do missing health damage once it is fully stacked on the enemy.

Death’s Dance: Death’s Dance is still as strong as before, even after losing the magic resist component. While it isn’t an ideal first or second item pickup anymore, it is still great to acquire.

Guardian Angel: This item ensures you have a second life and makes you harder to kill. The attack damage part is a nice bonus, but the second-life effect is a crucial aspect of this item. It is the perfect last-slot item in your build.