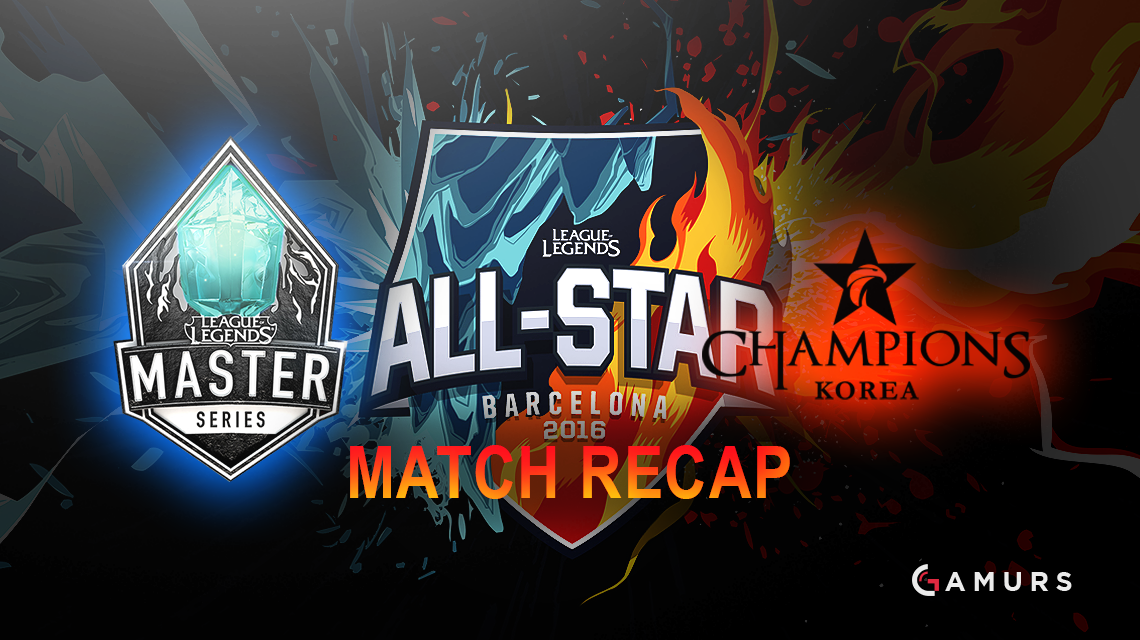 It is that time of year again, for the season-ending event after the World Championships, All-Stars 2016. Teams were created by fan votes to compete in a glorious competition. The third match of the day was the LCK All-Stars playing against the LMS team. Here’s how things went down:

The final match of Day One for All-Stars 2016 kicked off in predictable fashion, with the LCK gaining a minor gold lead in the opening few minutes by superior CS.

The game had a slow start, with players more interested in taking CS than engaging in a fight and it was not until the 5-minute mark where a clean gank from Bengi resulted in the first blood for the LCK on PraY.

LMS did pick up a kill in the toplane a few moments later after a successful tower dive to decrease the gold gap between the teams. The LCK though still had 1k gold lead to contest with, primarily from the midlane where Faker had a 30 CS difference over Maple, with it increasing slowly and surely throughout the game.

The LCK continued to take complete control of their match, picking off LMS players from each lane to slowly increase their control of the map and keep their gold lead growing.

With a 3k gold lead, the LMS finally struck on Faker and Bengi, able to take them both out to gain some momentum on the match-up, but are unable to get an objective in the process. They then get another two kills in the toplane and close the gold gap beneath 2k, slowly and surely bringing themselves back into the game for now.

The LMS continued their aggression to take more kills but still, LCK took more objectives to keep their gold gap growing with the LMS still unable to secure a single tower after nearly 20 minutes of gameplay.

The LMS finally get their first turret after 25 minutes to bring them back into the game, the team putting all of their hope into Maple’s Katarina, preparing around an optimistic endgame by picking off members of the LCK while they were on their own.

Team Fire’s LCK picks up a single kill and their fourth tower after a moment of madness brought the LMS back into contention, only being 1k gold away from catching up to the LCK this time. However it was not meant to be, with LCK reclaiming their dominance after the LMS gets too complacent and bringing their gold lead back to 4k+ after 30 minutes with a series of objective and kill gains across the board.

A Baron play ends in a team fight with both teams trading their ADC in the process. This forces the LCK into the mid lane to push forward and takes another tower with the LMS still yet to register a second. The game was turning into a complete mess with LCK still way off in the lead, heading into the late game.

The game finally met its end after a failed team fight attempt on the LMS backfired to give the LCK 4 kills and a mid inhibitor After a strong push towards the base to take down the nexus towers and finally the nexus, Team Fire took the lead after the first day of All-Stars 200-150.