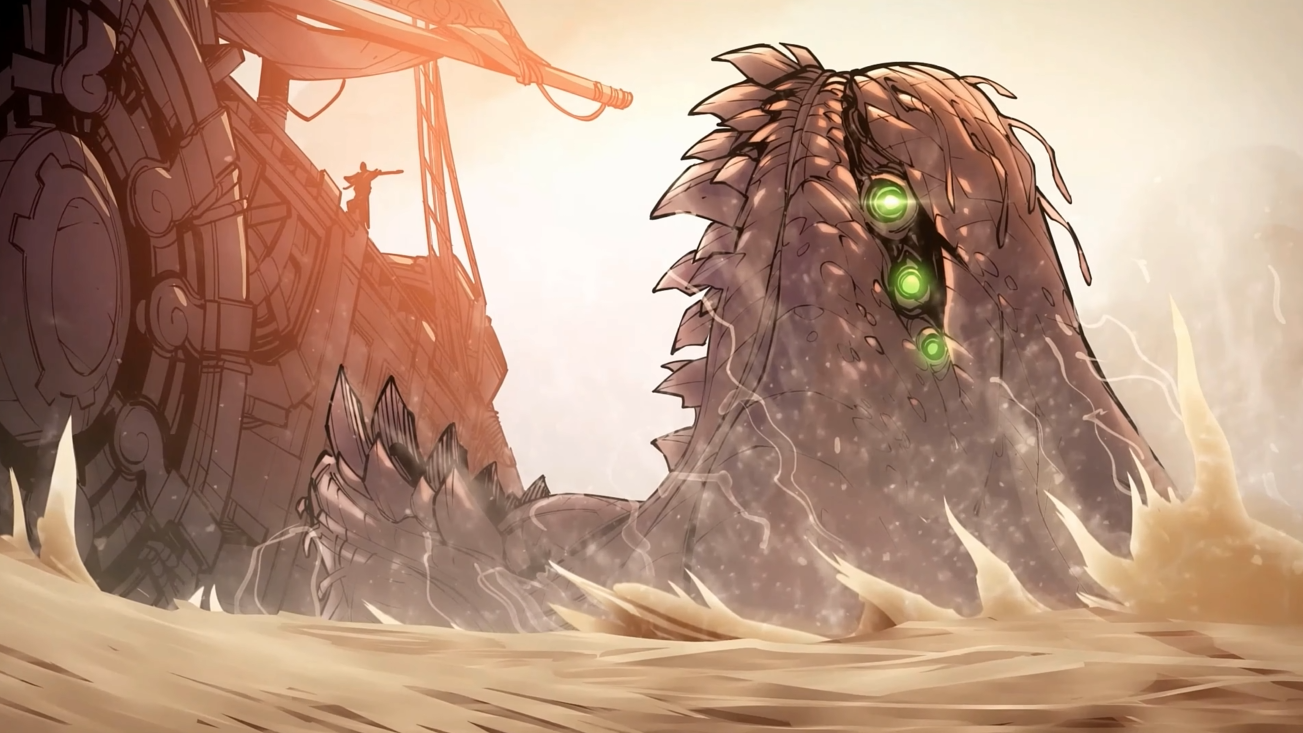 Ruined King: A League of Legends Story is a turn-based RPG that features a handful of League champions as the main heroes of a story set in Bilgewater, the lawless port city. Players are tasked with defeating the Ruined King Viego, and to do so, they will have to embark on a perilous journey at sea.

And, as for most RPGs, where there’s water there’s a fishing minigame.

Between the dangerous waters of the Shadow Isles and the deep waters of Bilgewater, players can arm themselves with patience, concentration, and the best fishing set they can find on the market to catch treasures and more than 30 different species of fish.

To reel in some kind of valuable item, players just have to go to a fishing location, cast the line, and wait for the fish to take the bait. Once the fish is hooked, players will have to bring the catch back to the dock by following the directions on the screen. Depending on which rod and bait the player is using, they will have a better chance of finding higher level treasures, rarer fish, and will have less chance of the line breaking.

Fishing in Ruined King is also a great oppor-tuna-ty for players to gain Black Marks in exchange for the creatures they’ve fished. Here you can find a list of all the fishing locations we’ve found in Ruined King.

All fishing locations at sea

There are four locations for fishing at sea, which are accessible only by boat. Players will firstly need to unlock the Charming Lady, Captain Fortune’s boat, before seeing some of these spots.

In the fishing hole Calm Waters players will find as many as 10 different species of fish. It’s a relatively easy spot to fish, and players will unlock it after completing part of the story.

As for the Calm Waters spot, the Angler’s Envy fishing hole will be unlocked after completing part of the main story. This is another perfect spot for players who want to fish without having to spend a lot on a high-quality fishing rod and bait.

There are two fishing spots at sea when approaching the Shadow Isles, the Spectral Shores and the Kraken’s Maw. As the inhabitants of the isles nearby, the fish of these waters will most likely give players a hard time. Gear up for sinister-looking frogs, electric eels, and gigantic squids.

All fishing locations in Bilgewater

If you don’t feel at ease in open water, Bilgewater has your back. Players can comfortably fish from five different locations while staying in the harbor city.

The first spot can be found in the Docs Harbor district and will be accessible from the moment players will unlock the fishing gear.

The second fishing hole in Bilgewater is located in the Buhru Grotto district, near the Docks. In the chest near the fishing spot, players will find some fishing gear, so be sure to check it out as soon as you unlock and enter the district.

Throughout the story, players will need to search and complete quests in the Grey Harbor district, the old side of Bilgewater that was destroyed by the previous Harrowing. It’s a district full of evil creatures and enemies, but players can avoid heavy fighting for a while by enjoying fishing in the haunted district.

Always in the Grey Harbor district, players will need to head to the Buhru Temple to help Illaoi commune with the spirits and find the answers she needs to continue the journey.

While in the Temple, the spirit of the players will be tested as well with riddles, puzzles, and tough enemies. But they can also relax a little by fishing in the sacred water of the Mother Serpent.

Much later in the story, Illaoi will have to offer to the Bearded Lady a token of her worth and the “essence of life” itself. The Kraken Priestess will head to the Well of the Mother Serpent, accessible through the Buhru Grotto district. In the sacred waters players will find many treasures, some even necessary to the story’s progression, and fish. There is always some kind of weird-looking fish in Bilgewater’s waters.

All fishing locations in the Shadow Isles

Moving on to the Cursed archipelago, there are four fishing spots players can find in the Shadow Isles. The first one can be found in the gardens of the Coastal Academy, the first haunted place players will have to face after leaving the Drowned Port.

The last fishing spot in the Shadow Isles is in the Vault of the Vesani, a place where Ahri’s tribe once studied and created magical objects. If you don’t see the Vault on your map, you don’t have to worry; the location will be unlocked by following the main story.

There are two more fishing locations in the Ruined King game, the first one being located in the Purification Temple. After retrieving a Corrupted Seed from Maokai, players will need to find the underwater temple of the ancient Buhru tribe, now surrounded by deadly monsters and inaccessible to everyone, except to those who are courageous enough to throw themselves into the jaws of a real monster. Passing the Revelation’s Walk, players will be asked to retrieve two halves of the same medallion. The fishing hole can be found in the “Moon side” of the temple.

Last location for fishing in Ruined King is Braum’s Shipwreck at sea. Players can access this location just once, when they retrieve Braum’s Freljordian shield, which he loses at the beginning of the story. After finding the shield and exiting the Shipwreck, the location will be only visible on the map. But players will not be able to go back to fish again.