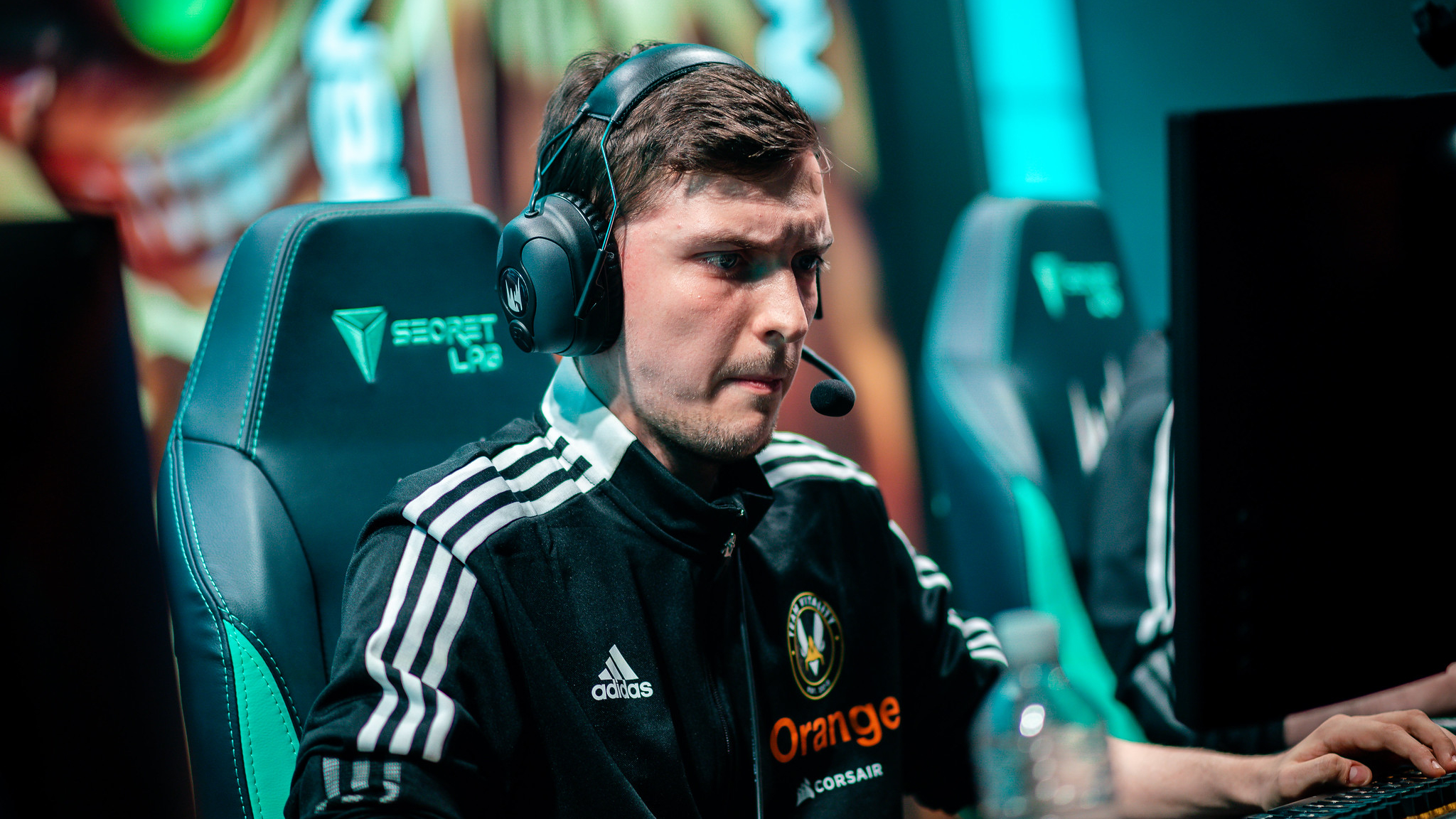 “Not good enough. We know.” Those were the words Fnatic CEO Sam Matthews tweeted just minutes after his team—once the European League of Legends powerhouse—lost a fast and one-sided game, the final blow in their win-or-go-home 2021 Spring Split playoff series against Schalke 04 Esports in April. Fnatic, for the first time in four and a half years, would not be a part of the LEC final four.

The team sat in the LEC studio in Berlin for just the second time in over a year following its shutdown due to the COVID-19 pandemic. They rushed backstage, feeling bewildered and shocked.

“The most important thing now is to take some fresh air and look at things with perspective and with a cold mind,” team director Javier “Dardo” Zafra told his players and coaches in their first meeting after the split. “Then we have to talk.”

The team had been divided before. After the 2020 World Championship in China, top laner Bwipo spoke poorly of jungler Selfmade and their differences in a November 2020 interview. It created tension internally and put Fnatic in an odd position. But after ADC Rekkles’ departure a few days later, the players agreed to squash their differences and give the 2021 season a fair shot.

Yet here they were at odds again, this time with the worst result in Fnatic’s recent history and differences in how to play the game bubbling up once more. They’d give this summer one more “Last Dance,” as they called it, an ode to the famous Michael Jordan-focused documentary on his last season on the Chicago Bulls. Fnatic, however, had another set of circumstances in front of them.

If the organization waited until November, it’d have a few problems on its hands. Bwipo, Selfmade, and support Hylissang each had expiring contracts, and Bwipo and Selfmade both declined extensions in April. With a need to keep Bwipo and Hylissang together—given both in-game synergy and their out-of-game professional relationship—moving on from either didn’t make sense. Looking at the talent across Europe, one semi-pro top laner caught Fnatic’s eye: 19-year-old French superstar Adam.

Fnatic found itself in a difficult situation, forced to make changes to perform well in the summer or miss its first World Championship in five years. In an attempt to salvage an on-the-rocks season, Fnatic pounced on the opportunity to sign Adam. With a potential move to the jungle for Bwipo in the cards, that meant just one thing for the team’s original core: Selfmade was out.

At first, it wasn’t clear where he’d go. But another team, Vitality, was in desperate need of a makeover. When fans learned about the trade on May 11, many were left puzzled—after all, one of Europe’s best junglers would be moving to the league’s worst team. But for those on the inside, the move came among a cascade of roster swaps that began with obvious cracks in the Fnatic core.

Few young players in the European Regional Leagues have garnered the attention that Adam did this spring. His team, Karmine Corp, dominated the 2021 LFL Spring Season, earning a spot in the European Masters Main Event, which they won in short order.

With that impressive performance, it became apparent Adam would draw the interest of many LEC teams this fall. Unclear if Bwipo or Selfmade would return, Fnatic wanted the young star on its roster no matter what.

“We had been looking at Adam and thought he had a massive potential,” Dardo told Dot Esports. “Waiting for November would only make our chances of getting [a free agent top laner] way more complicated because many teams would be looking at these same talents. That is the reason why we believed this was the best moment to [make] this change.”

Fnatic then had to decide what to do with Bwipo. The idea of a role swap wasn’t harebrained or out of the blue; for years, current and past Fnatic coaching staff and management had discussed moving Bwipo to the jungle.

“He’s just about everything but a top laner to me,” former Fnatic coach Youngbuck said in a March 2020 interview. “He’s really good at communicating, creating opportunities, engaging, making sure people end up in his lane to create good situations.”

So Fnatic revisited the idea, with management approaching current head coach YamatoCannon, assistant Tolki, and strategic coach Shaves. Shaves, who’s worked with Bwipo for the past two seasons, seemed confident in the move, he told Dardo, and thought Bwipo’s mindset would have a bigger impact in the jungle.

The change seemed like a natural fit. Bwipo’s role within the team centered around communication and map movement, typical of a jungler but not of a top laner. Given his voice, Bwipo developed a natural synergy with Hylissang, who also shotcalls part of the time for the team. Swapping Bwipo to jungle would allow for that relationship and synergy to thrive.

“That cooperation between jungle and support was a big speaking point [in favor of] it,” YamatoCannon told Dot Esports in May. “Hyli and Bwipo just function the same way, they play on the same wavelengths.”

With coaching signoff and consent from the players, the decision was made: Bwipo would be the new starting jungler of Fnatic.

As the decision-making process progressed, Selfmade continued to communicate with Fnatic management and his teammates. With Bwipo’s move, it became clear Selfmade could no longer be a part of the Fnatic starting lineup, but he desired to keep playing in the LEC “at all costs,” according to Dardo, even if it meant leaving the team he built his reputation with over the past two seasons.

He could’ve stayed on Fnatic as a substitute, and if results did not go as expected, a future return to the starting lineup remained on the table.

“Selfmade was clear with us—if we found a different jungler for [the summer] he’d like to go elsewhere and play rather than staying in a non-starter condition,” Dardo said.

For three consecutive splits, Vitality sat in the bottom two of the standings. Plagued by immigration issues in early 2020 and limited on signings due to COVID-19, Vitality went from a World Championship bout in 2018 and two playoff appearances in 2019 to being one of the LEC’s worst teams. That meant big swings were needed.

“This offseason we were looking at the market to see if we could do big moves, talking with a lot of teams,” Vitality CEO Nico Maurer told Dot Esports.

At first, it wasn’t exactly clear if Selfmade or any Fnatic player would be available. Other teams around the league, including Vitality, had inquired about player availability, wanting to pick apart pieces of the Fnatic roster. But Fnatic remained tight-lipped.

“We understood from Fnatic at the beginning that they were not looking to make player changes,” Maurer said. “But suddenly [Fnatic] told us that they were considering moves on players, so we told them we were super interested in that.”

With just six months left on his contract, Selfmade’s buyout likely wouldn’t demand a large price without a guarantee of a longer extension. Yet, Vitality needed a high-impact move.

“We were probably the only option for them to make money on Selfmade before he left for free at the end of the year,” Maurer said.

It was a high-risk move for Vitality—Selfmade can easily walk away as a free agent this offseason—but it was much needed for the French team. A fourth split at the bottom of the pack would not bode well for the team’s position both in the league and its relevance to the fan base. Maurer believed a return for the brand to its 2018 successes, where Vitality went to Worlds and even defeated RNG in a group stage game—”explosive,” as he calls it—was crucial to the team’s business.

Selfmade seemed like the perfect jungler for the roster Vitality was trying to put together to be “explosive” again. Apart from being a player with proven talent, the Polish jungler provides a lot of visibility and personality for the Vitality brand. “LEC Villains,” Vitality would call itself.

The 2021 LEC Summer Split is coming to an end and the results aren’t exactly as expected. Fnatic are exceeding expectations—tied for first with Rogue, with Bwipo excelling in the jungle role. He’s received effusive praise for his play and the swap seems far more natural than even Fnatic likely expected. Adam, the team’s new rookie top laner and the move that caused the dominos to fall, currently boasts the highest average kills, damage percentage of his team, and damage per minute among his top lane peers, according to League stat tracking site Games of Legends. Just one split in, he’s considered one of the best top laners in the league—a sign that Fnatic’s own risk is paying off.

Vitality, though, has not been so lucky. In addition to Selfmade, it acquired two semi-pro players, SLT and LIDER, in May, revamping the roster around its bottom lane. It reversed one swap midseason, recalling Szygenda from its academy lineup and putting him in place of SLT. The team now sits tied for eighth in a heated battle for a playoff spot with three other teams. Ahead of the final week in the LEC’s regular season, the heat is on.