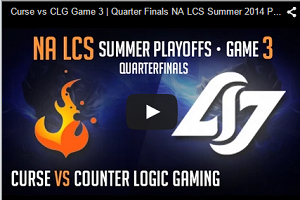 Counter Logic Gaming too a big risk traveling to Korea to boot camp before the LCS playoffs. They needed to renew Seraph’s visa and spend quality time with their coach Montecristo as they approached Worlds. Going into playoffs, CLG was preparing to already qualified for Worlds assuming they would breeze through the usual 4th place team of the NA LCS. However, Curse surprised everyone by not just defeating CLG but wiping them in a 3-0 clean swap. This would prove to be one of Voyboy’s most solid performances in the LCS with amazing KDAs on both Syndra and Yasuo. This series would bring CLG to the loser’s match against Dignitas where they would also lose again bringing them to relegations.

The hooks that turned the game around

EDG was famed as the strongest team in China coming into Season 4 Worlds and was expected to utterly dominate the majority of their bracket. In this series, AHQ had an amazing upset over EDG who was up over 11,000 gold after 40 minutes were looking to end the game with their siege/poke composition. Namei, who is normally praised as one of the safest and best positioned ADCs in China actually lost them the game when he was hooked twice by Greentea. The casters claimed there was also some questionable itemization by Fzzf who chose not to build a Mikael’s Crucible an item that would be vital for dispelling the thresh hooks and Zed ultimate in this series. AHQ winning in this fashion was one of the most exciting games at Worlds when most people expected this game to just be a clear cut stomp.

KaKaO’s Nocturne ultimates that save the series

Samsung Blue entered the finals of OGN Summer 2014 with resounding victories absolutely crushing SK T1 K and their sister team Samsung White in a resounding fashion. Samsung Blue was poised to win the whole tournament with them up 2-1 in the Best of 5 against KTA. Then, almost like epiphany had dawned on KaKaO and made some of the best Nocturne ultimates ever. KTA turned around what most people thought was an unwinnable series to a 3-2 victory over the favored Samsung Blue. While they won the series, most people would agree that KTA was not the best team in the 2014 OGN Summer but it was actually Samsung Blue. KaKaO is most notably in this series as the one man who turned the series around with impressive Nocturne play. Looking back at 2014, some people might forget the insane dominance that Samsung Blue had over this season by this one bad series.

Unicorns of Love vs Team SoloMid at IEM San Jose

A new Syndra king has arrived in Europe

While only concluded recently, this deserves noticeable attention as most people believed this was going to be an absolute stomp. Unicorns of Love was a newly admitted team in the LCS team ranked in the bottom 4 of Europe against the number 1 ranked team of North America, Team SoloMid. PowerofEvil deserves the most credit here as an impressive draft phase gave him most comfort champion of Syndra and ended up solo killing Bjergsen several times in lane. Bjergsen was destroyed in both games by his Danish brother as he had two resounding games on both Syndra and LeBlanc. Kikis was also highly notable as he pulled out one of the most unorthodox jungle picks ever in competitive play with jungle Twisted Fate. For 2014, people will remember this one series as the kickstart to Unicorns of Love’s fanbase and popularity in the west.

Brazil’s one day in the spotlight

In all of 2014, no game was more lopsided than this, the number 1 ranked European team of Alliance playing against one of the weakest teams in the tournament, the wildcard Kabum. Alliance had what most people call one of the worst drafts ever due to lack of wave clear and proper synergy. Froggen had an extremely lackluster game with his inability to properly assassinate people on Fizz, often dying 1v3. No one game has been discussed more on how the top team in Europe could lose in such a fashion such as this. What is often missed is how bad the team composition was crafted and how little ability they had to get back into the game. This is not to take away from the Brazilian team, their mid laner TinOwns who assassinated Wickd several times with his Ahri play. Kabum really deserve a lot of credit beating Alliance especially after Alliance had just had a perfect game against Najin White Shield. Alliance showed their true inconsistency at Worlds with a game that still has many people scratching their head on how they could possibly ever lose.

In conclusion, 2014 was a huge year of upsets in League of Legends. We have seen some of the best teams in the world with near perfect records lose in fashions nobody could have ever expected.