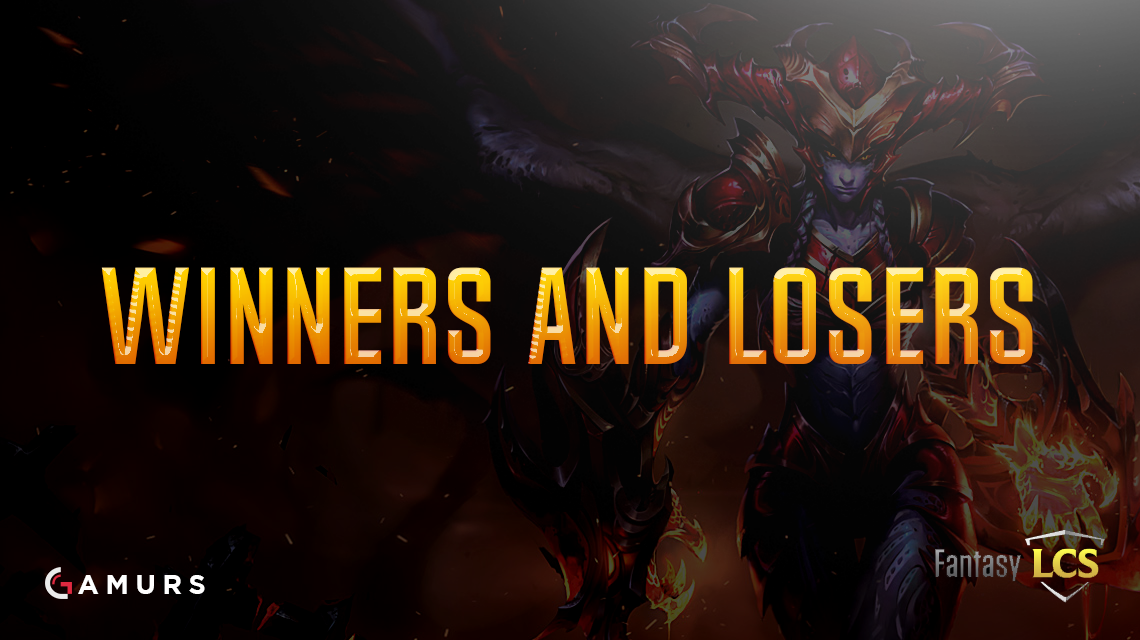 Week one of the League Championship Series is in the books, and we learned a lot from the action in North America and Europe.

This is the first iteration of the Winners and Losers article series since last split, so for those new to it, let me explain how it works. Every week, we look at a set of players that performed well in fantasy, the winners, and a group that did not do as hot, the losers, and discuss how they got there. So without further ado, here are your week one Winners and Losers.

The FlyQuest mid laner’s return to competitive play was a successful one, with his team winning both of its matches against Team EnVyUs and Team Liquid. Hai’s 29 kills were enough to be tied for second with three other players on the weekend. He was able to find four of those kills in quick enough succession in the Team Liquid series to earn himself a quadra kill, one of only two quadras over the weekend. Though I do believe Hai’s success could be attributed to the very favorable matchups they had, so I would not expect similar 60+ point weeks for Hai constantly, but I would not be afraid to start Hai every week. It is hard to bet against experience, so I suggest keeping Hai in the lineup.

Apollo topped all others in the first week with his 64 points, and rather unfortunately he was one that I had in my Sit ‘em for week one published last Wednesday, and he even sat on my bench in the GAMURS staff league. I have to admit, I was very wrong with this one. What is perhaps even more remarkable is the fact that nV failed to win a game, let alone a series, with two 0-2 showings against FlyQuest and Counter Logic Gaming. Most of Apollo’s points came in a 15 kill match against CLG, during which he earned 42 points, double that of what he scored against FlyQuest. He had no triple, quadra, or penta kills, and had just 22 kills, but he got them at the right times. Apollo had two games with over 10 kills, which undoubtedly helped him nail the top spot on the stat sheets.

Six players last week broke the 60 point mark, and by far Odoamne had the lowest amount of kills at 12. His number of deaths, of which there were 10, is slightly below average, but you do not see how Odoamnce did so well this week until you get to assists. With 42 assists, Odoamane is tied for the most among non-support players in week one. H2k-Gaming won both of their matches against Origen and Splyce without dropping a match, which certainly helped Odoamne, who performed equally impressive in both series. Odoamnce earned 28 points against Origen and another 33 against Splyce. His 42 assists helped him hit the mark for 10+ kills or assists in a game twice, for a total of four extra points. Aside from the assists, no other stat line makes itself too proudly known, just solid play from a team and player that look impressive.

As much as I love Rick Fox and the amount of work and effort he is putting into esports and Echo Fox, the LoL team looks to have a rough road ahead of them once again. Keith ended week one with a negative kill:death ratio, with 14 kills, 20 deaths, and just 23 assists. To make matters worse, he scored no bonus points with zero games topping 10 kills or assists, and no multi-kills. Strangely, Echo Fox lost their match against P1 0-2 but found one map win against the new-look Immortals, during which Keith scored the majority of his points in a 19.67 point showing that concluded with EF losing the series 1-2.

Now it is well worth noting that Splyce, as well as most EU teams, played just one series this week due to the differences between the North American and European schedules. Sencux was the lowest scoring player in all of the LCS this weekend, with all ten players at the bottom coming from Splyce or ROCCAT. Splyce had a very difficult matchup against European favorites, H2k, though we still expected to see more from the squad that looked especially good at the end of the season last year. Sencux found just two kills, one assist, and to add some salt to the wound, 11 deaths. His farm was alos the lowest among mid laners by about 35.