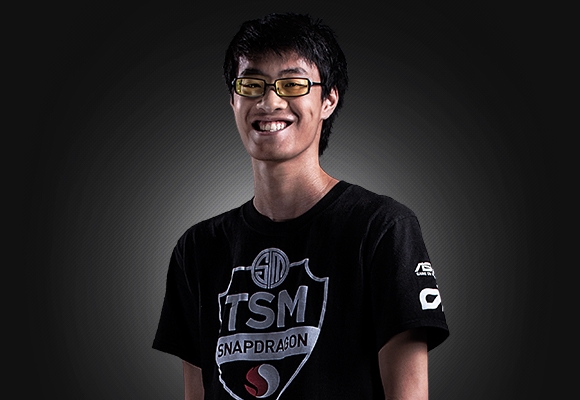 We are now half way through the North American LCS Spring Split, and it certainly has been quite a ride. Some teams, like Team SoloMid and Counter Logic Gaming, continue to impress in several of their games. A formerly struggling Cloud 9 began its resurgence to the top of the North American standings, while there is a deadlock in the middle of the pack. Team Coast continues its slump, even after swapping out mid laner Jesiz for former XDG mid laner Mancloud. Below are my awards for this week. (I tried a different format for this one – let me know how this looks)

We finally got to see our first pentakill of the season this week, as Team SoloMid AD carry WildTurtle looks to be making a resurgence on TSM this season after his season 4 slump. He also seems to possess a mastery of the champion Jinx, as he played it both games this week to a 19/5/5 KDA. His positioning for most of the week was perfect, especially during the team’s defense of the Alamo against Team Liquid, where he earned both a pentakill and quadra kill inside their base. WildTurtle is benefiting from the exquisite play of his support Lustboy and is beginning to carry competitive games on his own once again. Congratulations.

LemonNation had not been very impressive to this point this season, but he came out of his slump in a big way this week. He pulled out the first North American Veigar support to amazing results against Team Impulse (2/1/7), showing that his notebook still comes in handy. Against front runner Counter Logic Gaming, LemonNation played an immaculate Braum (0/1/12), where his Glacial Fissures synergized perfectly with top laner Balls’ equalizers. If LemonNation keeps performing like this, no one will look at him as the weak point performance-wise on Cloud 9 any longer (if anyone still did).

I know it may be a bit too soon to count out the reigning NA LCS season kill leader, but there was a lot of hype surrounding Mancloud’s return to the LCS on Team Coast. He seems to be shaking off the rust currently as he only racked up two kills in two games, while getting solo killed by Team SoloMid mid laner Bjergsen. During both games, he had little to no impact at all, playing Zed to no avail against Team SoloMid, while racking up only a couple kills on Ahri against Team 8. He got pushed around in lane by both Bjergsen and Slooshi, even with help from jungler Impaler around the corner. I really hope Mancloud bounces back and becomes the playmaking threat this team needs, but for now, he looks to be a bit washed up at this point.

During a disappointing week overall for top laners, Cloud 9’s Balls shined once again. Against Team Impulse, Balls was a team fighting machine on Maokai, going 2/0/9 and dominating former world champion Impact in lane. His 2/4/10 Rumble was even more impressive against Counter Logic Gaming as the exquisite placement of his Equalizers won the team several team fights in the mid game alone.

Jungler of the Week: PorpoisePops (Team 8)

PorpoisePops was nothing short of consistent during his team’s 1-1 week. He played a very strong Jarvan IV against Team Coast, going 4/1/11, setting up Slooshi to roll over his lane on LeBlanc. Although Team 8 lost to Gravity in their first matchup this week, PorpoisePops played a solid Rek’Sai (2/1/10) that helped set up the few plays the team had during the game. He was by far the strong point of his team all week long, and he was also by far the most consistent jungler this week.

Counter Logic Gaming mid laner Link is having a season to remember. Although CLG struggled against Cloud 9, his Ahri (7/0/9) was the lone bright spot, and he showed the ability to make plays we’ve been waiting for throughout many splits. Against Team Dignitas, Link shut down his lane opponent Shiphtur and went 6/0/7 on Ahri. He was immortal and nearly untouchable this week, and if the rest of the team steps up their game for next week, Link can continue to shine in his solo carry role.

Lustboy might be one of the most selfless supports in the North American LCS. He put this on full display when he flashed in front of a Blitzcrank hook against Team Coast to save Bjergsen’s life and set up a huge play for his team. His kill participation this split is the highest in North America with 82.8%. He went 0/0/9 in one of the strongest Janna games I’d seen this split against Team Coast, and played it again in their loss to Team Liquid, going 0/4/20. His 29 assists were the highest in the LCS this week. Here’s to several more amazing performances from Lustcena in the next five weeks.