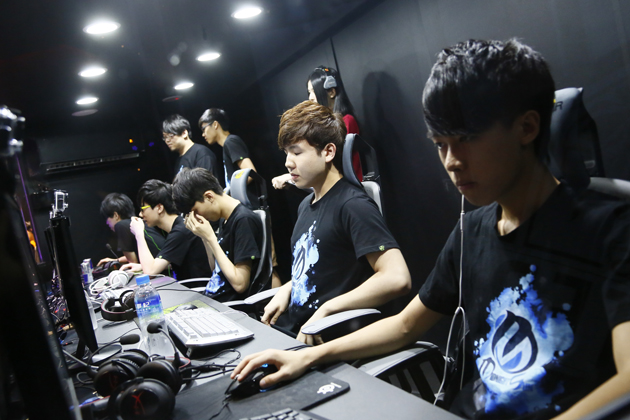 All stats used from Oracles Elixir! All photos used from lms.garena.tw

Midnight Sun Esports have come a long way as a team since their inception into the LMS, in the Spring Split. Originally an amateur team, very well known for having five players from Hong Kong, MSE has sprouted up from a sixth place relegation team to a fourth place playoff team. While the placing isn’t all too different, the performance shows, as they contested the top four teams in a way they didn’t last split.

The fall of TPA contributed to their rise in the standings earlier in the split and MSE maintained themselves in the upper half of the standings.  MSE continued to improve, but was gated by weak laners that eventually necessitated roster changes. Stitch and CaNdy, two former Xenics Storm players, would be imported to take the place of notoriously weak laners, CorGi and M1ssion.

MSE performed better against bottom teams with their new roster, as they were able to mechanically overpower them and snowball laning advantages, while capitalizing on their mistakes. However, their communication issues and binary playstyle left them at odds against teams with stronger players. This was evident as they were unable to win a bo2 against ahq, FW, and HKE in the latter half of the split. Expectations weren’t high for their playoff run, but taking a game off of a hot HKE, is a good sign for the team come regionals.

LOFS has long been the star of MSE, even when their former mid laner, Wish, was hailed as a talent ready to break out. LOFS can seemingly play any champion that his team requires, at a high level. LOFS tends to be on tanks for MSE, but has shown even more prowess on carries like Irelia and Ryze.

LOFS is often not overpowering in lane, but makes his advantages in small increments, and eventually finds himself stronger than the opposing top laner. LOFS uses any lead he gets to his team’s advantage, by utilizing teleport well and by being a great team fighter. Unlike many top laners in the region, he has a strong understanding of how to teleport flank and this skill alone has won MSE several games. While he has a slight passivity issue, similar to the rest of MSE, he has proven himself as the second best top laner in the region, behind ahq Ziv.

Empt2, since the origin of the team, has been the right hand man to LOFS. He provides vision and pressure on the top side of the map, which often left his bot lane unattended to. At a certain point, the style wasn’t effective, as LOFS was a solo carry, with little to no help from their mid laner M1ssion.

Empt2’s neglection of bottom lane, in combination with CorGi’s already poor laning in bot, left the team with only one reliable damage source. When MSE addded two new carries, in caNdy and Stitch, Empt2’s playstyle became more efficient, as he had stronger laners. Empt2’s playstyle then emulated Meteos’s style in the past, where he spends a lot of time farming and counterjungling to gain an advantage.

Empt2 became very comfortable with this style and abused it against teams with weaker laners, but once up against the FW and ahq, the style crumbled before him. His lack of early game presence was made clear as Mountain and Karsa both dismantled Empt2 and MSE’s game. Against both teams, Empt2’s laners were often left to fend for themselves, creating issues once either team stepped on the gas. He showed improvement in playoffs, but it is yet to be seen if hr can truly grow as a player.

caNdy is the mid laner to break the “Curse of the LMS,” where not a single player had won on Viktor in seven games. He would go on to win three straight with the champion, as he showcased superior laning and teamfighting to mid tier mid laners in the LMS. caNdy, from his games in the LMS, is not a player to force the issue and has suffered from over-passivity in the past, having been solo killed numerous times.

caNdy, in the LMS, has been rather reminiscent of Kur0, where he is efficient at many facets of the game, but is not quite that A tier player. He hasn’t quite shown himself to be among the top dogs in the LMS. However, as time has passed, he has been allocated more resources and has shown more carry potential, specifically on Jayce and Cassiopeia. caNdy looked fine against Toyz and HKE in the playoffs, but was largely bested by him, as Empt2 was also bested by Dinter.

Stitch’s impact, of the two Korean imports, has been a tad more subtle, but has made a world of difference. CorGi, on average was down 16.5cs at 10 minutes, during his games this split. While this is partially due to Chunx weak laning bottom as well, CorGi was the larger issue at hand, Stitch has improved remarkably on that, only being down by 1.5 cs at 10 minutes.

Stitch has also been an improvement in teamfights, but has actually not done much more than CorGi in this stage of the game, due to his poor positioning. It seems if Stitch doesn’t get Jinx, he simply isn’t very effective at putting out damage for his team, being outdone by the likes of KKramer, Raison, Lupin, and AN.

Chunx is an average mechanical support with fairly below average laning, but brings a lot to his team apart from this. Chunx has always been the main engage for MSE, averaging a high kill participation of 73.4% during the regular season and 77.6% during their series against HKE in the playoffs. This has caused a few problems for Stitch, as he cautions more with his damage input, but the team never truly centered around AD damage.

Chunx also brings a wonderful level of warding, leading the league in WPM in the regular season at 1.41, while also delivering 1.4 WPM in the playoffs. This plays a big part in the team’s ability to use LOFS effectively for TP flanks, as they tower siege or contest objectives. So, while Chunx isn’t as flashy as Olleh, SwordArT, or Albis, he is the foundation of MSE’s mid game.

MSE has good fundamentals as a team, being very efficient at closing out leads, warding proper locations based on their win conditions, and contesting objectives effectively. However, the early game has been a bit of problem for them, as they continue to work out the language barrier kinks. MSE has this tendency to play an incredibly passive early game, where they wait for the other team to make a move first, showing their lack of an early game concept. This is pretty common in Taiwanese league of legends, as teams will suffer from passivity at points of confusion.

This is the largest reason that MSE has been unable to deal with top teams in their recent games. HKE and ahq are extremely aggressive teams that will pull the trigger before you even know there is a gun. The Flash Wolves will just play your game, play it better, and make you run around aimlessly as you attempt to follow their approach.

That being said, MSE did show more initiative in their recent playoff series against HKE. After being thrashed around in game one and two, they effectively pressured Dinter and HKE, forcing them into fights they wanted, leading them on a leash. However, they could not repeat this performance in the following game four, being eliminated from the playoffs.

MSE, no doubt, has the talent to match HKE and the Flash Wolves at regionals, but will soon have to find their early game initiative, as they continue to refine their communication system. They will be meeting Flash Wolves in their first bo5, which based on the Flash Wolves’s recent performance, is closer than some might think. The series rides on Empt2 and caNdy’s ability to win the 2v2 in the mid lane, as they largely rely on Maple in the mid game. They will also need to prioritize carry champions on LOFS, as he faces the weakest LMS top lane, in Steak. MSE is not favoured due to the Flash Wolves’s experience, but they can get it done in five games.