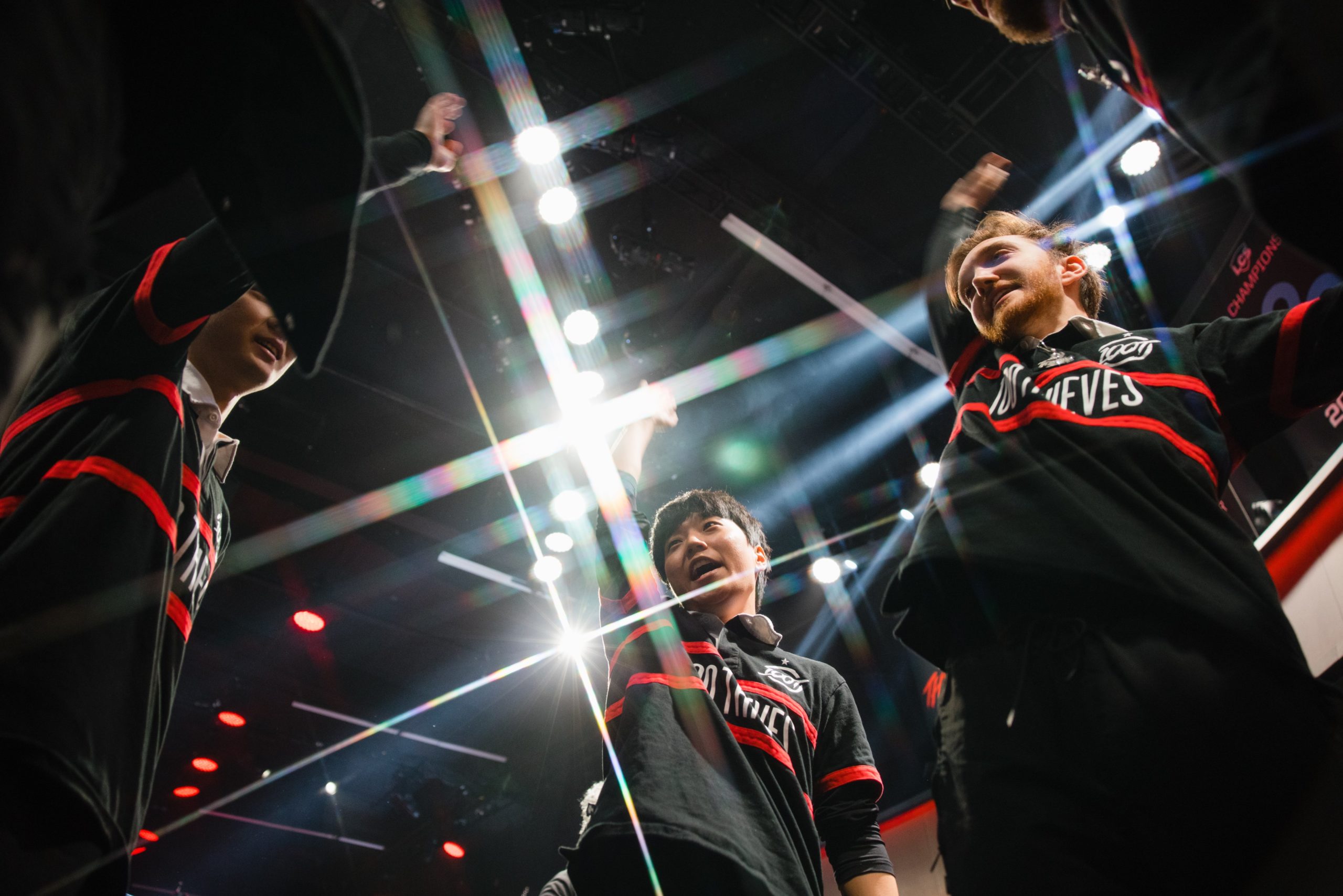 It was a tale of two halves in today’s series between Team Liquid and 100 Thieves, with two of the best League of Legends teams in North America battling for the first spot in the 2022 LCS Spring Finals. Mid-series draft adjustments and momentum was the name of the game, and only the Thieves adapted in time to take home the victory.

In the first two games, 100T strayed away from what worked for them across the regular season and throughout the playoffs. Instead of picking a classic front-to-back team composition, they chose a mélange of different champions without much synergy.

Champions like Tryndamere, Sett, and Vex meant that there wasn’t a clear point of engage for the Thieves, and, as a result, Liquid ran them over with ease. Bjergsen put on a clinic through the first two games, racking up five kills, 22 assists, and only two deaths on Twisted Fate and LeBlanc. His star teammate, Hans sama, was having a field day as well, collecting 16 kills and 10 assists without a single death.

A 3-0 sweep looked almost inevitable for Liquid, but 100T adapted their strategies just in time. They gave Ssumday and Closer perfect champions to give their team a formidable frontline, while also providing their teamfight enough engage to stay proactive in teamfights. With Ornn and Jarvan IV right in the thick of things for games three and four, FBI and Abbedagge were free to deal as much damage as they could.

Not only did Ssumday completely outperform Bwipo in the last three games of the series, but Abbedagge also shook off his lackluster early performances and broke out perfect wombo-combos on Orianna, on top of perfect poke as LeBlanc. FBI was the team’s late-game insurance with his picture perfect teamfight positioning, piling on 12 kills, 17 assists, and two deaths in the reverse sweep.

The final game ended up being the closest of them all, with 100 Thieves crushing the early game as they did the two previous matches. Liquid did, however, fought back with some well-executed teamfights that made the game close, especially with their superior five-vs-five team composition. As a result, 100T knew they could only win the game with a backdoor courtesy of Abbedagge’s Twisted Fate.

The reigning LCS champions fought with everything they had, and their resilience and intelligent drafting helped them come out victorious. Abbedagge said it was satisfying to reverse sweep “the team that thought they were the best in the league,” especially after losing the first two matches in that specific way.

While 100T enter the finals, Liquid have to prove themselves worthy to be finalists in their lower bracket matchup against either Cloud9 or Evil Geniuses. Both teams have shown glimpses of greatness across the series, but Liquid’s veteran jungler Santorin thinks that the latter has the edge tomorrow.

“I think both C9 and EG are pretty strong teams, and I’d probably give the slight favor to EG,” Santorin said in a post-game press conference. “C9 is one of those teams where I don’t really know what to expect from them because their drafts are very innovative at times, so I think it kinda comes down to how they draft during their games tomorrow.”

You can catch C9 and EG in action when these two electric rosters clash tomorrow at 2:30pm CT.