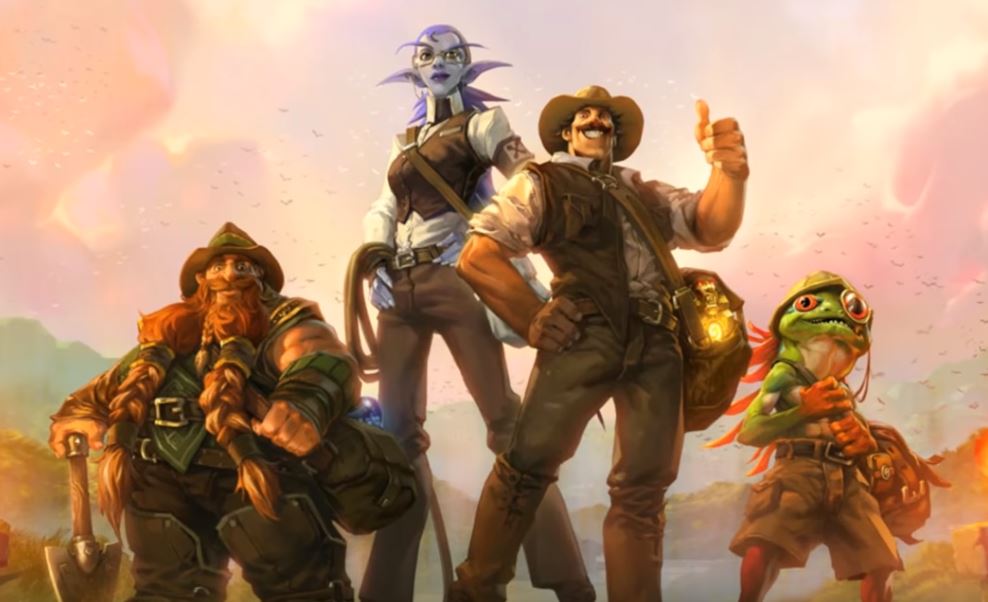 The Hearthstone team just released an exciting new cinematic that many believe hints toward the League of Explorers being a part of the next expansion.

Here are the characters that are a part of the League of Explorers.

Reno Jackson is arguably one of the most important Hearthstone cards to date. The character Reno is a clumsy explorer who thinks he’s a real charmer. If you aren’t aware of Reno’s world-renowned archaeological expeditions, he has no problem telling you all about them. Reno debuted in Hearthstone as the player escort for the first wing of Hearthstone’s League of Explorers solo adventure.

Reno’s primary importance to Hearthstone, however, comes from the fact that his card is the first to have an effect that depends on your deck having no duplicate cards. In card form, Reno is a six-cost Legendary 4/6 minion with a Battlecry that fully heals your hero provided your deck has no duplicates. Reno was an aggro player’s worst nightmare during his time in Hearthstone. Perhaps Reno will join Standard in some new form and make us all rich once again.

Unlike Reno who’s an original character to Hearthstone, Brann Bronzebeard is a part of one of the most important Dwarven families from World of Warcraft. Brann has two older brothers named Magni and Muradin, who are both essential to the lore of Azeroth. Brann is also the leader of the WoW version of the League of Explorers known as the Explorers’ League. Recently in WoW, Brann traveled to Uldir to help bring the raid boss turned ally, MOTHER, to the Chamber of the Heart so that she could search for a way to heal Azeroth.

In Hearthstone, Brann is a three-cost 2/4 minion that causes all of your Battlecries to trigger twice. Should Brann decide to take on the League of EVIL in the form of a new Standard-ready card, odds are a Dwarf this important will be pretty powerful.

Although Elise is a character original to Hearthstone, she recently made her WoW debut as a quest giver in Mechagon. Elise is a part of the Night Elf race and is the brains of the League of Explorers. Elise is also a relevant part of the Journey to Un’Goro expansion where she was featured in her second card, Elise the Trailblazer.

Elise made her first card appearance, however, as the Legendary minion Elise Starseeker. This card is a four-cost 3/5 minion with a Battlecry that causes you to shuffle the “Map to the Golden Monkey” into your deck. Elise the Trailblazer is a five-cost 5/5 Legendary minion that causes you to Shuffle a sealed Un’Goro pack into your deck. If the League is re-introduced as cards in a new expansion, Elise Starseeker and Elise the Trailblazer might indicate that we can expect their new versions to use somewhat similar mechanics.

In World of Warcraft, Sir Finley Mrrgglton is arguably the coolest Murloc to ever exist in Azeroth. Finley is portrayed in Hearthstone and WoW as a sophisticated scholar who enjoys squaring up with Pirates and tracking down ancient treasure. Sir Finley Mrrgglton was found by Elise Starseeker as an egg, which could explain why he’s much more friendly toward other races than most Murlocs.

In card form, Sir Finley Mrrgglton is a one-cost 1/3 minion with a Battlecry that causes you to Discover a new basic Hero Power. Finley helped lead some of the most interesting decks available for play during his time in Standard, so if he gets a new card, it’ll have high expectations to live up to.