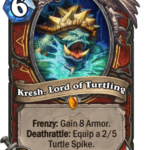 Warrior’s upcoming legendary minion has a bunch of value packed into one singular card. Aside from the sheer number of effects stacked onto one card, it also pairs nicely with other late game cards that could revive it, like Saurfang and the recently buffed N’zoth.

This six-mana minion can be a single card stabilizing factor against aggro due to the large body, eight armor on Frenzy activation, and a 2/5 weapon to clear their board. While Control Warrior has been a niche list when compared to the Tempo and Rush variants, Kresh has a chance to turn the tide.

Discounting the mana cost of your cards is a potent ability in card games, and Lady Anacondra allows Druid to perform miraculous turns. While Celestial Alignment Druid’s appearance on ladder has been mostly limited, Lady Anacondra boosts the consistency by allowing you to play multiple Nature cards after you cast the deck’s titular spell.

While a two-mana cost reduction on Nature spells is powerful, the fact that it comes down as late as turn six serves as a weakness for the new Druid Legendary. Despite this, expect Lady Anacondra to find its way in non-Token styled lists.

Priest is a class that has always been synonymous with board clears. This newest iteration of AoE removal is unique in how it removes minions. With Against All Odds specifically going after minions with odd attack, it can make situations difficult for opponents to play around since there are many threats within the meta that have one, three, or five attack in the early stages in the game.

One specific example of this is Kazakus Golem Shaper, who not only has three attack but also his Medium Golem, which usually finds itself with five attack in most scenarios.

Even if Against All Odds can’t make its way into the main deck if Control Priest lists, players will need to make sure to be mindful of it when playing around Discovers and random card generation.

Shroud of Concealment provides players an interesting way to augment your cards by providing temporary bonuses if you can use the minions the same turn they’re drawn. Stealth has been a mechanic that was difficult to balance in Hearthstone; it was either too weak to matter or too strong to interact with and rarely found a middleground.

The newest spell finds an interesting design space that can either be used to tutor minions out of your deck in the early game, or act as a potential combo in the later stages of the game when you can play them in the same turn as the Shroud.

If Shroud of Concealment can’t sneak its way into Rogue lists that are already optimized, expect it to show up in future decks with low minion counts that hope to provide temporary Stealth to high value minions.

When Shaman has found success in previous Standard formats, it’s usually been off the back of one mana 1/3 minions that empower themselves. Wailing Vapor allows Shamans to lean into an aggressive identity and aims to have the class play many cheap Elemental minions in the earlier turn to force the opponent to answer the Vapor.

While Aggro Shamans have traditionally had problems with refueling after spending all their cards in the early game, the new Elemental has synergies with the next card on this list.

Shaman’s state in the current 2021 Standard meta has mostly been struggling. While the class had interesting aggressive lists at the start of the expansion cycle, they mostly faded away as more decks from other classes became refined over the past few months. One primary weakness for Shaman has been a lack of consistent card draw.

Luckily for the class, Primal Dungeoneer gives Shaman a chance to generate value thanks to its chance to tutor specific cards out of your deck. While Shaman’s Dungeoneer wants you to tailor your deck towards specific cards (Nature spells and Elemental minions), there are two types of ways to go about building your list.

If you put in only two copies of specific spells and minions, Lightning Bloom and Cagematch Custodian as an example, then Primal Dungeoneer will give you a specific direction. Alternatively, you can put in multiple Nature spells and varying Elemental minions to give you many options which reduce your chance of drawing all of your copies before the Dungeoneer.

Compared to Primal Dungeoneer, which is much more linear in what it aims to do, Devout Dungeoneer can be put into decks that don’t want to solely focus on spells. While Priest’s Dungeoneer hitting a Holy spell could lead to powerful combos on future turns, the current set of Priest’s non-Holy tools, like Raise Dead and Palm Reading, could still be good cards to draw from this new minion.

While Priest lists are mostly refined, the Dungeoneer can serve as a potential replacement to Venomous Scorpid, who effectively acts as a three-mana unit that provides you a spell.

This new Beast minion fits as a perfect slot into the new Menagerie Deathrattle Demon Hunter build. Already finding play in a Grandmaster playoff deck, Felrattler can be summoned from your Razorboar or Death Speaker Blackthorn and act like a Swipe-like answer to opposing tall and wide boards.

Expect to play around Felrattler, a simple yet effective minion, whenever you run into a Demon Hunter for the next couple of months.

While Mutanus’ primary function will be against Control and Combo-styled decks, the newest Legendary Murloc will be used by those slower lists. Since Mutanus effectively removes a card from your opponent indiscriminately, he will always go at least one for one, and if your opponent needs to sink more cards into removing this late-game threat, then it provides even more card for card value than you could hope for.

As a small added bonus, Mutanus can be revived as N’zoth as an extra 4/4 body for decks lacking other Murlocs. While this is unremarkable in most circumstances, it’s extra potential to be mindful of when counting how many cards can be summoned by the old god.

To put it simply, this Demon and his ability is dangerous. Mana cheating in any card game has historically been a powerful mechanic. While spending your health as a resource sounds dangerous, if you can leverage your life totals to and play powerful enough cards in a short period of time (like Lord Jaraxus who effectively only costs four health), then you can usually end the game quickly in your favor.

Anytime you see a Stealer of Souls played against you, it must be quickly dealt with before Warlock can draw multiple cards, otherwise your opponent will be able to play more cards than one can feasibly expect in one turn.

If the Stealer of Souls somehow fails to leave an impact on the Standard meta, expect it to shatter the Wild meta with cards that let you draw multiple cards while making your hero immune in the form of Plot Twist and Violet Illusionist.

Try these cards for yourself as Hearthstone: Forged in the Barrens’ mini-set is officially out now on PC and mobile.