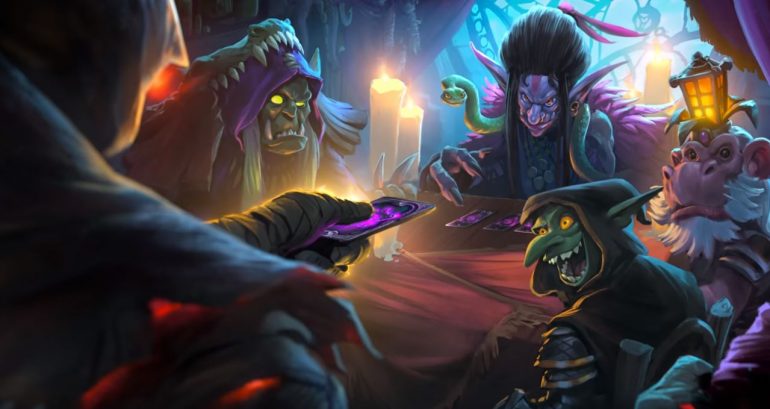 World of Warcraft veterans may recognize the Dark Pharaoh Tekahn as the King of the Neferset tribe. Tekahn is a member of the Tol’vir, a powerful race that was originally stone constructs created by the Titans. Many of the Tol’vir lost their stone skin through the Curse of Flesh, but the Neferset managed to regain theirs in exchange for obedience to Deathwing and Al’Akir.

In World of Warcraft Tekahn uses a number of Warlock-related abilities like Shadow Bolt, so it makes sense that he would be a Warlock in Hearthstone. Though no one is quite sure why Tekahn is helping the League of EVIL, if his history is any indication then we can assume the Dark Pharaoh is up to no good.

Tekahn will start with the standard Warlock Hero power Life Tap. This power costs two mana and allows you to draw a card in exchange for taking two damage. Tekahn will have two additional Hero powers that can be unlocked by completing certain challenges while playing.

One of Tekahn’s unlockable Hero powers is called Pain Split. This power costs two mana and allows you to deal two damage in exchange for taking two damage. Before you can unlock Pain Split, you’ll need to use your Hero power 25 times.

Tekahn also has an unlockable power called The Pact. This power costs two mana and allows you to summon a 2/2 Imp in exchange for taking two damage. Before you can use The Pact you’ll need to summon 50 Demons.

You can check out Tekhan and take the action to the Kirin Tor Citadel right now in Chapter five of Hearthstone’s Dalaran Heist.