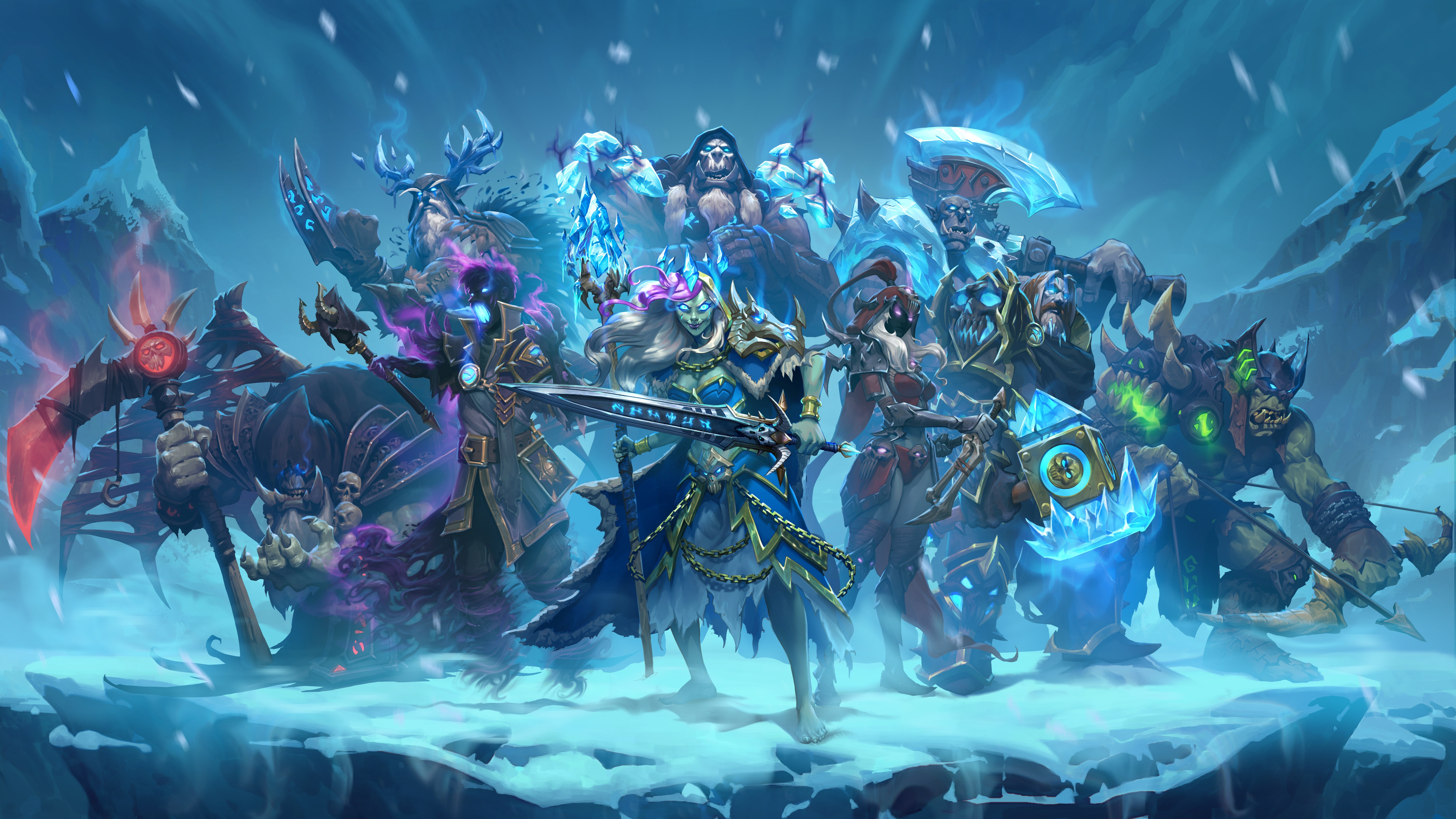 The moment has come—your duel with the Lich King.

The battle with the Lich King represents the final encounter in the solo adventure introduced with the release of Knights of the Frozen Throne. In previous weeks, players have battled their way through the Lower Citadel and Upper Reaches to finally reach the menace who sits atop the Frozen Throne.

Beating the Lich King with every class won’t be easy. He cheats. To even the odds, we’ve compiled an outline of the Lich King’s strategy and decklists for every class proven to be successful. What’s more, each decklist contains only Standard legal cards—you won’t need an extensive collection to build these lists. You’ll have Prince Arthas freed in no time.

The Lich King begins every game with 30 armor in addition to his health pool. On turn one, he casts a one mana spell unique to each class that challenges deckbuilding and tends to put the game immediately in his favor. Each spell effect is outlined below.

The Lich King plays mostly freeze effects and a couple of choice Death Knight cards to try and win the game. Chief among them is Anti-Magic Shell. In the middle and later stages of the game, the Lich King will try and develop several minions on the board and then apply the Anti-Magic Shell buff. It’s difficult to deal with these minions after they’ve been buffed, so the best practice across all of these matchups is to clear the board as best you can when you can.

Since the Lich King reliably casts Frostmourne on turn seven, there’s a reliable way to counter it. Play Doomsayer on your turn seven and Frostmourne and its Trapped Souls will disappear in the space of a turn. Just make sure you’re clearing the board beforehand so nothing returns to the Lich King’s side of the field after the deed is done.

After losing Frostmourne, the Lich King’s Hero Power changes to Remorseless Winter. Remorseless Winter deals damage to you in increasing increments of one with each passing turn. While not much at the start, the Hero Power becomes overwhelming pretty quickly. Ensure you have a strong, reasonably quick way to end the game after dealing with Frostmourne.

This amusing spell effect is the only one of the nine that doesn’t directly affect your deck. Any capable Priest deck should do the trick in this fight, but we’ve put together Silence Priest in keeping with the theme. Silence a friendly Ancient Watcher or Humongous Razorleaf, then turn it into a huge threat with Divine Spirit and Inner Fire.

The Lich King doesn’t offer much for spot removal, so don’t be afraid to be aggressive applying resources to your minions and the board. The deck is capable of beating him before the Frostmourne turn or shortly thereafter.

Spell effect: Destroy all minions in your hand and deck that cost three or less.

You cannot win before Frostmourne, but luckily the Druid class has powerful ways to go over the top.

You can use this spell effect to your advantage to thin your deck directly toward your win condition. Ignore the low cost minions in this list—they’ll be gone shortly. Instead, focus on what’s remaining—ramp spells, Jade Idol, Spreading Plague, Earthen Scales, Gadgetzan Auctioneer, and Malfurion the Pestilent. Essentially, your remaining deck is an abridged version of Jade Druid. Accelerate your mana, protect yourself and your Gadgetzan Auctioneer with Spreading Plague, and start cycling Jade Idol to develop increasingly powerful Jade Golems.

Once you regain control of the board after Frostmourne, your Jade Golems should be strong enough to put the game away. Should you need a little more time, Malfurion the Pestilent and Earthen Scales give you additional armor to keep you from succumbing to Remorseless Winter.

Spell effect: All of your minions in your hand and deck are 1/1s.

You’ll want to try and go underneath the Frostmourne turn with this Shaman list, a pretty standard take on aggressive Evolve Shaman. Build a wide, aggressive board with your low cost minions, then give them a Bloodlust to push through large amounts of damage.

Blizzard is the card you want to watch out for in this matchup. If played on curve, Blizzard destroys most of your board, leaving little pressure to combat the Lich King’s Frostmourne. Combat this board clear by making sure you evolve your board out of Blizzard’s range by the Lich King’s turn six.

You’re not playing Doomsayer in this list. Beat Frostmourne by Devolving the Trapped Souls, then dealing with the minions left over. Again, having an evolved board state makes this task easier, so don’t be shy with your spells.

Spell effect: Destroy all spells in your hand and deck.

Losing access to all of Rogue’s spells certainly hurts its tempo, but you should be able to play a strong value game with this combination of Deathrattle and Jade Rogue to overwhelm the Lich King.

The goal is to maintain card advantage by continuously generating pressure through Deathrattle minions while simultaneously growing your Jade Golems. Razorpetal Lasher accesses cheap spells that easily enable your combo effects on Plague Scientist and Vilespine Slayer, and keep control of the board. Doomsayer the Trapped Souls, then bring everything back with N’Zoth, the Corrupter and put the game away.

Spell effect: When your minions die, they are resurrected to the Lich King’s side of the board.

There’s a couple ways you can go about this with Paladin. You can choose the reactive route where you play predominately board clears, weapons, and healing spells, then look to Uther of the Ebon Blade as your win condition. Alternatively, you can play a proactive game and turn a cheap minion into a sizeable, hard to kill threat.

We’ve chosen the proactive route to make you a little less reliant on your draw step and, perhaps more importantly, because any excuse to hear Galvadon’s theme song is a good one. Your goal is to complete The Last Kaleidosaur quest by buffing a soldier or ideally a Primalfin Champion into a formidable threat. Completing the quest gives you Galvadon, a five mana minion that adapts five times into a threat both elusive and powerful.

Your initially buffed minion or minions should carry most of the game. In this list, Galvadon will mostly serve as the final nail in the coffin. Should a buffed minion die, don’t worry. The Lich King only receives the original body of the minion—its buffed stats and abilities aren’t included.

Once again, we’ve omitted Doomsayer. Look to Equality and Consecration or Equality and Wild Pyromancer to deal with Frostmourne and the Trapped Souls.

Spell effect: You take two damage for each duplicate card in your deck.

This spell effect forces Warlock into the singleton, Highlander archetype. You will play a control game, using the deck’s several board clears and spot removal options to keep the game in check until you can reach Bloodreaver Gul’dan or your giants. You will play several demons along the way, and, provided you sequence and trade effectively, should regain substantial board pressure after landing Bloodreaver Gul’dan. If Gul’dan fails, either of your giants should provide enough pressure to end the game late. Kazakus takes advantage of your decklist and offers another win condition with powerful spell generation.

Remember, the goal is to survive until you can turn the corner and safely cast one of these larger threats. Sunfury Protector or Faceless Shambler on a Twilight Drake or one of your giants keeps minions and Frostmourne from attacking you directly. Use your board clears and spot removal as needed, and don’t be afraid to use your life total as a resource to Hero Power and keep cards in your hand. You should be able to end the game before Remorseless Winter gets out of hand.

Spell effect: You take two damage for every minion in your deck.

Since you cannot rely on Hunter’s linear aggression for this one you have to play a slower, controlling game. Use Hunter’s secrets, spells, and weapons to survive to Deathstalker Rexxar. Deathstalker Rexxar and your new Hero Power is your win condition—building custom Zombeasts.

The Lich King plays several freeze effects that can disrupt your ability to attack with Eaglehorn Bow. While some offenders can be dealt with through other spells, the worst offender is Water Elemental. Deadly Shot is in this list almost entirely for killing Water Elemental in the early game and freeing your Eaglehorn Bow for another target.

While you take damage for having minions in your deck, a couple are necessary for success. Hunter is lacking in board clears, so Doomsayer is a must to deal with the Lich King’s Frostmourne turn. Additionally, Hunter tends to take a lot of damage through controlling the early stages of the game, so Alexstraza is necessary to gain life and ensure you don’t immediately fold to Remorseless Winter after Frostmourne.

That’s a lot of damage you have to deal. Even Pirate Warrior is going to have a tough time with this one.

After that, use Scourgelord Garrosh’s Hero Power to deal one damage to all your minions. Finally, cast Battle Rage. Battle Rage should draw you five cards, and those cards should look pretty familiar—they’re the copy of the combo you sent away at the start of your turn. Your draw step on your next turn should complete the combo copy, and then you can repeat the exercise. Rinse and repeat as needed until the Lich King begs for mercy.

The rest of the list is composed of cards to help survive and draw to the combo. Use your Doomsayers and Brawl to keep heavy board states and Frostmourne at bay. Use your weapons and other spot removal on other, smaller threats. Make sure you’ve played Scourgelord Garrosh before you start the combo—you need his Hero Power in order for it to work. And most importantly, draw those cards.

Spell effect: Your health is set to one.

Basically, you need to counter this spell. You can do this by playing Kabal Lackey into Counterspell on turn one. The Lich King will play right into it, and you’ll stay at full health. From there, the game becomes a typical game of Freeze Mage. However, since the Lich King has an increased armor pool, Alexstraza plus burn spells may not be enough to get the job done. You may have to rely on Archmage Antonidas to generate enough Fireballs to finish the game. Save the Mirror Image gained off of Ghastly Conjurer to generate your first Fireball and protect Antonidas. If Antonidas survives the turn, you should be in pretty good shape.

If you don’t have Kabal Lackey and Counterspell in your opener, the game becomes much harder but it’s not unwinnable. Kabal Lackey into an Ice Barrier or Ice Block can buy you a few turns. Frostbolt deals with any first threat the Lich King plays. Arcanologist draws you into more protective secrets and provides a way to trade into early board pressure. While the Lackey and Counterspell combo is ideal, it’s not a necessity.

Congratulations! Prince Arthas is yours. Now queue up your favorite Paladin deck and start showing off your accomplishment to everyone on ladder. You’ve earned it.