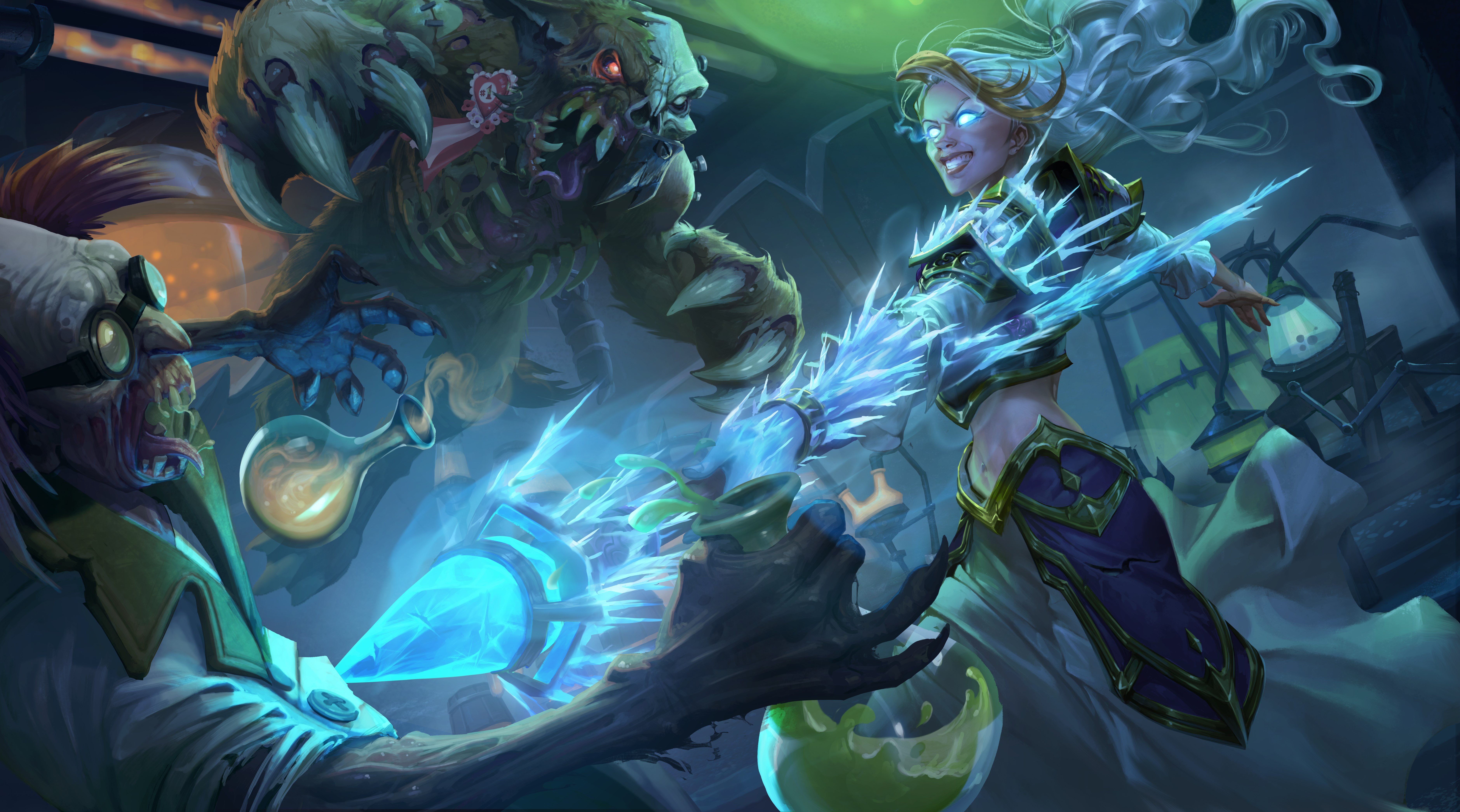 The Upper Reaches of Icecrown Citadel are open.

In this second wing of Knights of the Frozen Throne’s solo adventure, you face another three bosses on your way to the Lich King. These bosses will test your deckbuilding, your adaptability, and your sense of humor.

Blood-Queen Lana’thel, Professor Putricide, and Sindragosa are your three opponents this week. All three of these fights center around shifting Hero Powers, either yours or your opponent’s, and your deck must take these shifts into account.

Like in the Lower Citadel, these bosses don’t fight fair. So to even the odds a little bit, we’ve compiled a guide through every boss that exposes their strategy and its weaknesses. Study up, build the deck, and request an audience with the Lich King.

The fight against Blood-Queen Lana’thel is pretty straightforward compared to the rest of the encounters in the Upper Reaches. Lana’thel plays a Warlock deck similar to the pile of cards you’d put together to complete the Warlock class cards quest with a few curveballs thrown in. The first curveball you’ll see, and the card that decides the nature of the entire boss fight, is a one mana spell that turns your hero into a vampire. By becoming a vampire, you gain a new Hero Power—Vampiric Bite. Vampiric Bite costs zero mana and gives a non-vampire minion +2/+2 and gives it the “vampire” minion type. You have to use Vampiric Bite every turn, even on Lana’thel’s minions if you have no targets of your own.

To make things a little more complicated, Lana’thel begins the game with two 0/10 minions on the battlefield. And they’ll stay that way—unless you have to bite them.

The nature of the board state and your new Hero Power means you need to play a minion on turn one or two to get and stay ahead. Naturally, this leans your deck towards aggression, and in particular, decks that can quickly go wide. Decks like Pirate Warrior, Token Druid, and Token Shaman are all acceptable choices for this boss fight. They play minions early and often, take advantage of Vampiric Bite, and put the game on a fast clock.

However, Lana’thel’s Hero Power (deal three damage with Lifesteal) and the all-in nature of the aggro decks can lead to some punishing, slow draws and a game that slowly gets away from you. So for consistency’s sake, our recommended deck tries to do something a little different.

This list is a modified version of Jade Druid. The deck plays much the same way with ramp and Jade Golem producers, but adds cards like Druid of the Swarm and Crypt Lord to improve the deck’s early game. Having a minion on the board in the first couple turns is critical to winning the boss fight, so mulligan aggressively for your Jade Idols and Druid of the Swarms instead of the traditional ramp cards.

While this deck maintains Jade Druid’s powerful late game with Ultimate Infestation and the threat of infinite, growing Jade Golems, it’s the Taunt minions that will do most of the heavy lifting. Since Lana’thel starts with two minions already on the board, it’s pretty easy to find a moment to cast Spreading Plague for good value. Add a Vampiric Bite to one of your Taunts, and Lana’thel will have to take multiple turns powering through your board while you build your Jade Golems and whittle away at her life total. A Crypt Lord on curve is nearly unstoppable, turning into a 3/8 after its bitten, and then growing with each minion to play. Again, Lana’thel is stuck attacking your minions while you end the game.

Professor Putricide’s fight happens in three stages. At each stage change, Putricide’s Hero Power changes and a specific Legendary minion spawns to his side of the field.

Putricide starts the game with 15 armor and a passive Hero Power that makes all secrets cost zero mana. In addition to playing all sorts of secrets from the Hunter, Mage, and Paladin class, Putricide will try and win the board with Growing Ooze, a 1/1 that gets +1/+1 at the start of Putricide’s turns.

Once you take away all his armor, Putricide’s Hero Power changes, he summons a Legendary minion, and he gains another 15 armor. Instead of free secrets, all weapons cost one mana. Putricide plays two—Eaglehorn Bow and Tentacles, a 3/6 weapon. Additionally, Putricide summons Festergul, a 3/5 minion that deals three damage to your board at the end of his turn. You will have to remove all of Putricide’s armor again, and probably deal with Festergul, to get to the fight’s final stage.

For the final stage, Putricide’s power changes again, he summons another Legendary minion, but he gains no armor. For the last stage of the fight, every card costs five mana. Additionally, Rotface enters the battlefield. You’ll want have a clean answer to Rotface available in your deck, lest you give Putricide even more Legendary minions to play with.

Believe it or not, this modified version of Freeze Mage is a solid choice for taking down the professor. While Putricide gains a lot of armor over the course of the game, he also does a pretty good job of damaging himself as well through killing your minions from weapons or effects from the likes of Abomination. The rest of the archetype offers strong choices to disrupt Putricide’s plan as you build towards Alexstraza and a burn finish.

Mage has the best secrets of the game and best takes advantage of Putricide’s Hero Power during the game’s first stage. Arcanologist effectively brings a secret from your deck to the battlefield rather than your hand. Ice Block and Ice Barrier will keep you alive, and Counterspell checks one of the Mage secrets Putricide plays, whether it be his own Counterspell or a Vaporize to clear the way for an attack from Alextstraza. What’s more, Freeze Mage is largely indifferent to most of the secrets Putricide plays, simplifying your turns and paving the way for large Eaters of Secrets. Eater of Secrets really shines, and due to the volume of secrets Putricide plays, is never a dead card throughout the game. Playing it on curve should develop a powerful minion that should carry you through the rest of the first stage. While Eater of Secrets chips away at Putricide’s armor, your Hero Power keeps his Growing Oozes at bay.

At some point, Putricide will develop a weapon or two. While you’ll do a great job of mitigating his board through Doomsayer and Blizzard, his Tentacles weapon represents a healthy chunk of your life total if left unchecked. Two copies of Avian Watcher synergize with your secrets and force Putricide to spend armor and weapon charges to deal with the Taunt minion.

While traditionally you may want to try and save a Fireball for the finish after you Alexstraza and Pyroblast, in this matchup, you won’t be lacking for damage sources, especially if you have the second Eater of Secrets to clear the way for an Alexstraza attack. Instead, feel free to use some of your burn package as removal for Putricide’s more problematic minions. Fireball offers a clean answer to both Festergul, Rotface, and Boogeymonster—minions you’ll want to be rid of quickly before they get out of hand.

Sindragosa is the last and most intricate boss of the Upper Reaches. In your game against her, four spaces of your board are taken up by irremovable Blocks of Ice, limiting the amount of minions you can play to the board. Bringing Sindragosa to 20 health triggers her Hero Power and turns any remaining minions on your side of the field into additional Blocks of Ice. Both of these scenarios disincentivize a minion-heavy strategy.

However, Sindragosa punishes you for playing lots of spells in your deck, too. Her deck runs several copies of a one mana spell that deals three damage to you for every spell in your hand. She’ll play at least a couple of these just over the first two turns, quickly depleting over half your life total if you’re unprepared.

Control Paladin is a fine choice. Paladin provides sufficient damage from its arsenal of weapons alone, uses a high number of minions to control the battlefield, and can replenish any health lost with its strong healing options.

But if you want a simpler approach, look at this variant of Freeze Mage. You wanted Freeze Mage in Putricide’s fight for its toolbox, but here, the matchup is all about one card—Alexstraza. Alexstraza brings Sindragosa down to 15 health, but her effect doesn’t trigger Sindragosa’s Hero Power. This means you’ll get to connect once with Alexstraza before it gets turned into a Block of Ice, putting you just a burn spell away from victory.

This deck removes all non-essential spells to prevent your life total from dwindling too fast and too early. Minions that draw cards replace the spells and help you get to Alexstraza on time. You keep Freeze Mage’s burn and secret package, and useful tech cards like Frost Nova and Blizzard that will reclaim the board should things get messy. Skulking Geist destroys all copies of Sindragosa’s burn spell in her hand and deck, giving you peace of mind as the game starts to go late. Sindragosa plays a clunky Dragon-themed deck behind her unique burn spell that shouldn’t pose much of a problem. Keep your spell count in your hand low, trade your minions off the board, and draw, draw, draw.

You’ve completed the Upper Reaches. Next week, you finally get to face the menacing Lich King. Will you be ready?