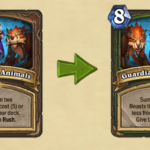 In combination with a newly announced event, The Masquerade Ball, Hearthstone Patch 18.4 is bringing two nerfs to two Standard cards that will affect both Standard and Wild. Big changes are also coming to the Battlegrounds game mode.

Here are the notes for Hearthstone Patch 18.4.

The two cards being met with nerfs are Druid’s Guardian Animals and Mage’s Tortollan Pilgrim. The nerfs to both cards are as follows:

The nerf to Tortollan comes long after the card has been the star of the Turtle Mage archetype. In combination with Scholomance Academy’s Potion of Illusion, players were able to make a deck with only Blizzard, Frost Nova, and the potion to let players accrue multiple copies of the Pilgrim while infinitely freezing the opponent’s board. Now that the Tortollan Pilgrim casts the actual spell and not just a copy, there’s a hard limit to how often the Pilgrim can use these spells.

Guardian Animal’s nerf is a big one to every Druid since the card’s debut with this expansion. Due to Druid’s ability to ramp their mana and cheat out cards sooner due to Innervate and Lightning Bloom, Guardian Animals could often be cast many turns sooner than turn seven.

What this means for the meta

Ragnaros returns to Battlegrounds with a more engaging Hero Power that requires you to slay 20 minions to activate it. Once activated, you’ll gain an immense +8/+8 worth of stats every turn. This means that Ragnaros will have an obscenely weak early game, similar to Mr. Bigglesworth and Alexstrasza, but the chance to stabilize if you can survive the early onslaught from other players in the lobby.

Chenvaala is the only new Hero that directly correlates with Elementals being in the minion pool. Due to the way her Hero Power works, figuring out a proper order and curve to playing your Elemental minions will yield massive discounts when planned out properly. Nearly comparable to Omu, Chenvalla can grant you bonus discounts on leveling your Tavern, which can give you a massive advantage if you’re lucky enough to find Elementals.

Rakanishu is a Hero that grants you bonus stats in a similar fashion to Pyramad. While the stats that Rakanishu grants are two for every Tavern Tier you’re at, the cost is also doubled when compared to Brick by Brick. This means fitting Rakanishu’s Hero Power into your curve will be difficult if you can’t find a strong start.

Al’Akir the Windlord is a passive Hero Power that grants your leftmost minion Divine Shield, Windfury, and Taunt. This means you can give your strongest minion the opportunity to take multiple hits while dishing out several attacks.

While the new Heroes are exciting, all of the Elemental minions bring an interesting dynamic to the mode when they’re in the pool. Elementals have a chance to augment the economy in a similar fashion to Pirates thanks to minions like Sellemental, Refreshing Anamoly, Stasis Elemental, and Nomi.

Besides saving money and changing how you interact with Elementals in the shop, they also have ways to scale up their stats like Murlocs and Dragons. This means that committing to Elementals will give you a weaker early game. But if you can reach the mid to late game with them, you’ll be able to gain massive stats every time you purchase Elemental minions.

Besides the inclusion of Elementals, a new typeless minion, Deadly Spore, means you can tech a poisonous minion into your comp without relying on Maexxna, Toxfin, or Amalgadon. While the new poisonous unit is exciting, this minion shouldn’t be purchased every chance you get because it’s difficult to buff the health of neutral minions efficiently in Battlegrounds.

Similar to when Pirates were included, Elementals are guaranteed to be in the Shifting Minion Pool until a future patch. This gives players a guaranteed chance to experience Elementals and practice them.

Aside from all of these new Heroes and minions, Battlegrounds’ ranks will be reset for all players. The new rating reset will solely be affecting the external ranking of players and not the hidden matchmaking that they’ve accrued over the last season.

Finishing in the top half of the lobby will yield players a rating increase with up to 300 per win. Each player’s rating can never go below zero and they’re shielded from rating loss until they’ve climbed above 2,000. Once players achieve 2,000 rating, players are granted a floor every 500 where players can’t lose rating.

Players who are below 6,500 rating earn a small bonus to their ranking gains that facilitates a faster climb. Blizzard also said rating losses will remain consistent.

You can try the Elementals in Battlegrounds when Hearthstone: Scholomance Academy’s Patch 18.4 releases alongside The Masquerade Ball event on Sept. 29.