Starting tomorrow, Hearthstone is introducing another event in collaboration with Hallow’s End with Patch 18.4, The Masquerade Ball. In this event, Elementals storm the Battlegrounds mode, Dual Class Arena returns, and players receive a Legendary Quest Chain.

To celebrate Dual Class Arena’s arrival, every player is getting a free arena run to try it out. Aside from these three starting features, Rexxar’s chapter in the Book of Heroes will be playable, in addition to each week bringing a new Hallow’s End themed Tavern Brawl.

The Elementals’ arrival in Battlegrounds is adding four new heroes and 16 minions. Elementals at first glance look like a mix between Pirates and Murlocs due to their ability to alter Bob’s economy and grant each other multiple stats.

With Dual Class Arenas, players pick one class out of three and then another selection of heroes out of three to gain that corresponding Hero Power. After selecting your two heroes, you’ll draft cards from both classes and the neutral pool to create your arena deck.

With the introduction of the free Book of Heroes solo content, Hearthstone is adding a new way to look at the lore for each hero in the game. The next hero that will be following Jaina is Rexxar. The tale will talk about Rexxar’s half-orc and ogre heritage and how he came to meet Thrall. Finding success in the Book of Heroes will grant you a Hunter pack, which will give you only Hunter cards from Standard. No matter where the story goes, there will always be Huffer.

For the weekly Tavern Brawl, Blizzard teased what the next three will be to match up with the event. Rise of the Zombeast will be the first Tavern Brawl, where both players use Deathstaker Rexxar’s Hero Power from Knights of the Frozen Throne to build a Zombeast every single turn. The second Brawl is a Masquerade Tavern Brawl where minions transform into other minions that cost two more. When that transformed minion dies, the original minion takes its place and rejoins the battle. The third Tavern Brawl is a third iteration of the Boss Battle Royale. There will be 10 different bosses to choose from, with each class bringing a new boss. The list of playable bosses (and their speculated corresponding class) is as follows: 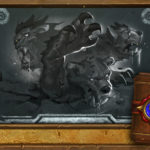 In addition to all of this content, players can also receive a Legendary Quest Chain, which has three quests and yields a total of 10 packs. There are a total of three Year of the Raven Packs, three Scholomance Academy packs, and one of each from Ashes of Outlands, Descent of Dragons, and Saviors of Uldum. This means you should make sure that you have two open quest slots when the Legendary Quest arrives so none of your regular quests get overwritten. Aside from these three quests that yield packs, there’s also a hidden secret quest that will grant you two golden copies of Transfer Students. 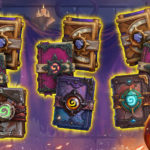 You can experience the new content for yourself when the Scholomance Academy: Masquerade Ball event launches tomorrow, Sept. 29.