The first expansion of the 2021 year for Hearthstone will be Forged in the Barrens, Blizzard announced today during BlizzConline. The new set will close out the Year of the Phoenix and kick off the Year of the Gryphon.

The news of this set comes as a combination of the other announcements of the Classic Format and Core Set leading up to the BlizzConline, two massive changes that will shake up Hearthstone more than ever in the game’s history. Aside from what’s been already shown, Blizzard also teased the Mercenaries mode, a new PvE experience that expands on the roguelike experience of the Adventure mode. Mercenaries will be joining the game later in the year.

With the new Hearthstone year, Rise of Shadows, Saviors of Uldum, and Descent of Dragons are all leaving the Standard format and are now Wild Format-exclusive sets. For the Core Set, Blizzard already teased three new cards with reimagined versions of the classic dragon aspects: Ysera, Malygos, and Deathwing. These three dragons will be free for all players after reaching a specific level. 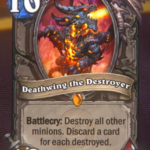 Forged in the Barrens is bringing in new keywords and mechanics, such as Frenzy, varying ranked spells, and Legendary mercenary minions. The newest expansion calls back to earlier themes in World of Warcraft’s history with a focus on the Horde and Quilboars in the Barrens zone. Hearthstone’s director also said later in the Year of the Gryphon, Alliance-focused stories will be told.

The newest keyword, Frenzy, will have minions activate their ability the first time they’d take damage. For ranked spells, each class will get spells that upgrade over the course of the match based on how much total mana you have.

In addition to ranked spells within Forged in the Barrens, each spell from here on forward will now have a class specification similar to WoW, effectively adding tribes to spells.

In regard to Horde heroes, popular figures like Vol’jin and Samuro are getting cards. Vol’jin will be free to all players who log in later today and Samuro will receive his first interpretation within Hearthstone. Vol’Jin will allow you to either trade your weak minion for a stronger one or potentially disrupt opposing strategies and get rid of powerful minions for higher-value ones. 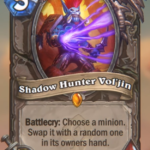 Hearthstone Mercenaries will se players pilot heroes within the Warcraft universe and level them up in exciting tactical battles. While the release date and details haven’t been discussed yet, more information will be shared in the future.

You can log into Hearthstone to claim your free Shadowhunter Vol’jin and 30 Years of Blizzard Card Back for free and gain access to Ramuul Runetotem by pre-purchasing the Forged in the Barrens mega bundle today.