Ahead of BlizzConline, Blizzard teased major changes for Hearthstone today, including a new format alongside a new set of cards, in addition to moving the Basic and Classic sets to Wild.

Once Standard rotation occurs when the next expansion drops, the Core Set will replace both Basic and Classic cards within the Standard format and will contain 235 cards.

While 235 cards sound daunting to collect, the Core Set will be free for all players and will be more approachable for any newcomers to the game. The Core Set will have a healthy mix of cards returning from past sets, reimagined community favorites, and 29 cards that are entirely new to the game.

Here’s the exact breakdown for what the Core Set will contain:

Core Set cards will be obtained by leveling up each class. All Core Set cards will be awarded to players for reaching levels 1 to 10, similar to the Basic Set. To obtain neutral cards from the Core Set, the total level of your classes will be considered up to 60. For players looking to collect the golden version of cards within the Core Set, they can be obtained by completing achievements that are tied to the respective class. Players who log in after rotation will automatically be granted the new Core Set equal to their current level with each class.

The Core Set also gives the game a chance to depart from the conventions of the Basic and Classic sets by being effectively refreshed each year. Once a new Hearthstone year arrives, a new Core Set will take the place of the previous with new and existing cards yet again. And when that occurs, your collection will automatically update.

With the Core Set’s arrival, the Legacy Set will be added to the game as a new home for both Basic and Classic. It’ll be eligible for use in the Wild Format. Most cards from the Hall of Fame will also join the Legacy Set, with the exception of Shadowform, Genn Greymane, Baku the Mooneater, and their respective even/odd-based cards.

With this new format, players can craft decks and compete using Hearthstone’s original 240 cards as they once were in 2014. Once players log in for the patch that occurs for the next expansion, before its official release, the collections of players will mirror their original iteration back in Patch 1.0.0.5832 of June 2014. Some immediate examples that Blizzard teased include four-mana Leeroy Jenkins, Warsong Commander granting minions Charge, and Holy Smite dealing two damage with the ability to go face.

When this patch occurs, players who unlock the Wild Format will also gain access to the Classic Mode, with Classic’s ladder system mirroring the same as Standard and Wild. This also includes the ability to challenge friends within the Classic Format and having any games played within the mode count toward its achievements.

The total number of deck slots will be increased to 27, from 18, allowing players to have at least nine decks for each mode at the same time. Classic packs will now be added to the collection as well as the previously mentioned Legacy Set in Wild. If you have Knife Juggler, there will be two versions: one with two attack and health that’s available for Wild, and one for Classic as it once was in 2014 with three attack and two health.

Cards that were added to the game later won’t be eligible for usage in Classic Format. These cards include:

Here’s an effective visual explanation for how each of the three formats will work: 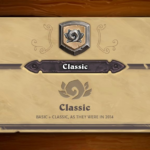 Players can tune into BlizzConline on Feb. 19 to learn more about the Core Set and Classic Format. The Hearthstone team also said there will be more news shared before revealing the cards that will join the Core Set.