Hearthstone is receiving an update that was teased last week. Patch 20.8.2 is coming tomorrow and it’s nerfing three cards found within popular decks in Priest and Token Druid specifically: Apotheosis, Renew, and Gibberling.

Despite Priest not appearing in the top-five represented decks in the recent competitive standard ladder meta, the class has drawn ire from the community due to the amount of healing and random card generation it could find in a pinch. Apotheosis’ stat nerf makes the card less efficient and game-swinging when used on minions like Blademaster Samuro. 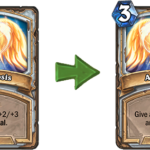 Renew’s mana nerf will prevent it from being found from cards like Wandmaker. And if it were to be discounted by cards like Palm Reading, it would need an extra reduction to be free. With both of these nerfs, Priest will become a less effective deck on the current ladder. This also might be a sign that a Shadow-style Priest deck will be pushed when United in Stormwind is released with the revealed Darkbishop Benedictus.

Token Druid has been Druid’s most consistent deck for the class in the current Forged in the Barrens meta. Blizzard said it wanted to target Gibberling since this one-mana minion was one of the main causes for the blowout snowball games the aggressive list could perform. Now that the Gibberling’s mana cost is doubled, Druid players will need more time if they wish to perform a turn where Gibberling witnesses multiple spell casts.

Aside from these three nerfs, there are also two functional gameplay adjustments to the Battlegrounds mode regarding the newest minion Archdruid Hamuul and Darkmoon Prizes when they’re selected to be in the pool.

You can try out a new standard meta when Hearthstone’s 20.8.2 patch goes live tomorrow.