Hearthstone’s Patch 20.4.2, while small in the amount of changes it brings, will perform something that was never before done within the game’s entire history. The update will disallow Stealer of Souls from finding use within the Wild Format.

Within the patch notes, Blizzard notes that it does not have plans to make banning cards a pattern that will be repeated in the future. Despite this, they are still open to feedback since this is the first time that removing a card from a constructed format has ever been done.

Related: Stealer of Souls will be banned from Hearthstone’s Wild format next week

In addition to this change, there will be adjustments coming to the Battlegrounds mode with two changes that buff Mechs and nerf Quilboars. The changes affect the late game of both minion types with sizable changes which will alter how you aim to play both pools.

With regards to Mechs, the buff to Kangor’s Apprentice with a tier reduction, which gives the type another powerful five tier minion to look forward to if you’re aiming to go for a Big Mech or Deathrattle style builds. One other important change with this tier update is that it will be easier for Mech players to find a Foe Reaper 4000 since there will be one fewer tier six minion to run into.

Since Quilboars will be receiving yet another nerf with Captain Flat Tusk, going for power spike at turn six will make you spend more time getting stronger compared to past versions. This is due to the fact that you need to spend more gold for Blood Gems.

Here are all of the changes coming with Hearthstone Patch 20.4. 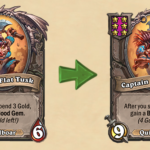 Try out Wild with Stealer of Souls’ departure and the new changes in Battlegrounds when Hearthstone: Forged in the Barrens’ Patch 20.4.2 goes live tomorrow.