Blizzard pushed Patch 19.2.1 live earlier today. It’s a smaller patch when compared to others in recent memory, but it does bring important changes to both Constructed and Battlegrounds.

Here are all the card changes, and the context for the changes, coming with Patch 19.2.1. 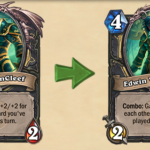 What this means for the Constructed and Battlegrounds meta, and how to best optimize your collection

Since Edwin and Boggspine Knuckles will both be nerfed, players will be able to get a full dust refund. While Blizzard didn’t initially say that Edwin’s nerf will be reverted in the first draft of the patch notes, once Hall of Fame occurs later this year, senior game designer Alec Dawson said Edwin (alongside other cards, like Dinotamer Brann) will be replaced in the classic set. More details will be revealed later.

Players who want to maximize their dust economy and card collection can safely dust Edwin for full value. Once the Hall of Fame is announced, they can craft him in either Regular or Golden modes and be reimbursed with their dust later once the next rotation happens.

Now that Boggspine Knuckles was nerfed, it’s less likely for Shaman to run away with the board since Dread Corsair will no longer turn into a free five drop due to the damage nerf. While the evolve mechanic and the ability to perform it twice were both kept in check, the nerf to its power will make it harder for Shaman to fight for the board since four-health minions will be more durable.

Edwin’s nerf wasn’t expected since players assumed he’d simply just make his departure in the 2021 Hall of Fame. Since Edwin is being temporarily weakened by the changes in a similar fashion to Dinotamer Brann, it’ll be tougher for Rogue to steamroll over opponents without an Edwin with immense power and bulk in the earlier turns. Players hoping to play with Edwin will find it more difficut to try to make Edwin work on his own since his power level mainly elevated due to the new card Foxy Fraud in the Madness at the Darkmoon Faire set.

With nerfs to both Shaman and Rogue, there’s an opportunity for control decks to slip back into the meta since Evolve Shaman and Rogue could usually decimate opponents if they drew into the right curve of cards. Aggro was traditionally good against both decks, so the presence of aggressive decks may weaken now that their favored matchup will fade a bit. But regardless of Rogue and Shaman’s nerfs, aggro should still be accounted for and be a potent force on the ladder.

In Battlegrounds, Elistra the Immortal was one of the most impactful new cards added in the most recent update. Since she helped guarantee and control certain attack orders in combat, she could effectively be used in the late game to absorb chump or Poisonous minions trying to break the Divine Shields on your high-health warband. This nerf to her stats will make her less impactful in the early game. Finding a quick Elistra was an effective 28 damage due to her Divine Shield combined with Reborn, even ignoring her attack controlling ability.

You can experience these card changes and claim your dust now since Hearthstone Patch 19.2.1 is live.