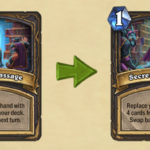 In conjunction with a newly announced event, The Forbidden Library, Hearthstone Patch 18.2 is bringing three nerfs and two buffs to constructed cards, as well as big changes to the Battlegrounds game mode.

The initial draw that Patch 18.2 brings to Hearthstone is multiple card adjustments to both overperforming and underperforming cards in the meta. These changes affect the Standard and Wild formats.

Here are all of the nerfs coming to constructed Hearthstone:

The Secret Passage nerf gives less raw draw power potential to this one card and limits it a little bit more to be found within an aggressive package. But even with this slight nerf, Secret Passage still provides immense value, with four temporary cards drawn for one mana.

Hearthstone game designer Alec Dawson said on Twitter that Cabal Acolyte was one of Priest’s highest performing cards. In its current state, its effect combined with its stats made it a powerful inclusion in different kinds of Priest decks. This forced Cabal Acolyte to be included in more Control heavy decks.

Darkglare’s nerf was mainly made with the Wild format in mind. While Darkglare had powerful mana cheating turns for Standard, the level that it could do this in Wild was off the charts. Players could often play multiple cards from Molten Giants, Flesh Giants, and even a Loatheb after playing their Dark Glares. With this nerf, the swing potential of Darkglare will no longer be oppressive to opponents in the format.

In addition to these three nerfs, here are two buffs to Totem Goliath and Archwitch Willow:

While the extra attack is nice for Totem Goliath, the main appeal of this buff is the less harsh Overload cost. With one less Overload, players can now follow up a Totem Goliath turn with another Totem Goliath or a Bloodlust if their Goliath died the previous turn. Archwitch Willow’s mana cost reduction is also huge for her in Standard since being able to cheat multiple big demons a turn earlier lets players swing the board in their favor sooner. While the -2/-2 stat reduction is unfavorable for players who are fans of Willow, the main appeal of the card was her ability to summon massive Demons.

Despite the stat reduction on Archwitch Willow, Blizzard said that out of all the cards affected by these changes, Secret Passage, Cabal Acolyte, and Darkglare will be eligible for a full dust refund for two weeks after Patch 18.2 goes live.

Aside from all of these buffs and nerfs, the Battlegrounds mode is also getting multiple changes, from new heroes to updated minion pools.

Both Lord Barov and Forest Warden Omu bring up interesting implications in augmenting your Battlegrounds economy. Lord Barov provides a guessing game to what opposing boards can be—and in the early game, you can often do guesswork and deduction to figure out exact boards and how players win. While the initial risk investment of one gold is high in the early game, the payoff for guessing right is tremendous at three gold.

In opposite fashion to Lord Barov, Forest Warden Omu provides a less volatile bolster to your economy. By giving you a two gold rebate on your level up, it allows players to either level up later to buy units in the same turn or improve their future rolls after leveling up. Forest Warden Omu will need lots of practice and community effort to understand the true power level of this new hero.

Jandice Barov gives powerful recycle potential due to her ability to swap out your minions for other minions in Bob’s Tavern. In the early game, Jandice allows you to swap out tokens for minions with actual stats, granting free early game wins most of the time. In the late game, her Hero Power—Swap, Lock it, and Shop it—can be used to reuse powerful Battlecry abilities each turn. The most notable of these examples are Battlecry Murlocs, like Primalfin Lookout and King Bagurgle, and Pogo Hopper for mechs.

In addition to these heroes and minions, a long-awaited feature is coming to Battlegrounds by allowing friends to make private lobbies. Before, players were allowed to pair up with one other friend for ranked queues. But now, players will be allowed to team up with three others for ranked Battlegrounds. Once that party group starts bringing in five players, the room goes private and is unranked.

You can try out all of these new card changes and updated Battlegrounds changes when Hearthstone: Scholomance Academy’s Patch 18.2 drops alongside The Forbidden Library event on Sept. 8.