Starting next week on Sept. 8, Blizzard is adding multiple features to Hearthstone when it launches The Forbidden Library with the release of Patch 18.2. With every week that passes this month, more features will be added from new Battlegrounds updates to a free PvE story mode receiving monthly updates and a return of the Heroic Brawliseum.

During the first week, Battlegrounds Parties will allow players to match up in private lobbies with their friends. Expanding on initially only allowing duo queue, players can now group up for ranked matchmaking with up to three other friends. Once you start a group with five or more people, ranked queues are disabled and then you can start a private lobby with five to eight players in total.

Besides this new way to queue up, three new Scholomance Academy themed heroes and a new mech minion are entering the rotation. The three heroes are Lord Barov, Jandice Barov, and Forest Warden Omu. In addition to these heroes, there are a couple of minion updates. The first update is a nerf to the recently buffed Pack Leader, nerfing both his attack and power boosting effect by one. The other minion update is Mecharoo being replaced by Micromummy as a tier-one mech. 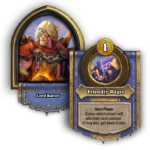 Lord Barov brings an interesting betting mechanic to the table with his Hero Power. For one gold, you can place a bet on who you think will win between two other players in a lobby. If there are no other players in the lobby, you’ll have to bet between you and your upcoming opponent. If you guess correctly, you’ll be awarded three gold. This gives you the chance to have a net gain of two gold every time you use your Hero Power. This Hero Power becomes exceedingly powerful when there are a ton of early-game focused heroes that are guaranteed to win early turns, like the Lich King, Yogg-Saron, and Rafaam, since you can always bet on them to win.

Jandice Barov’s Hero Power is potent when you bring Battlecries and tokens into the mix. For zero gold, you can effectively replace early-game tokens with actual minions. Once you make it to the late game, Jandice becomes especially powerful with Murlocs and other Battlecry-based strategies. After using your Primalfin Lookout, you can put it back into the shop, giving you more opportunities to search for more Murlocs.

Forest Warden Omu also brings up interesting opportunities to alter your level curve. Similar to Bartendotron and Elise Starseeker, Forest Warden Omu can give you varying ways to spend bonus gold upon leveling up. Out of all three of these heroes, Forest Warden Omu will definitely take the most theorycrafting and skill testing to understand the full potential and proper path for optimization.

All three of these heroes are accessible to Tavern Pass holders when these new Battlegrounds features are released on Sept. 8. Players without the Tavern Pass will get the chance to use these three heroes when they’re released later on Sept. 22.

Aside from the slight nerf to Pack Leader, the minion pool has been updated to include a new mech. Micro Mummy is a potent replacement for Mecharoo. It has higher natural stats and an extra scaling option for Mechs in the early game. Both play similar roles since Micro Mummy can still serve as a reset for Deflect-o-Bot’s Divine Shield.

During the following week, on Sept. 15, an entire new free single player mode called Book of Heroes is launching its first chapter. With every chapter, a hero will go through eight boss fights, with Jaina being the first. After defeating eight heroes, players will get a class pack that contains specific cards that are exclusive to that class in Standard. Every month for an entire year, another core hero from Hearthstone will have their story told. There will be two extra hero stories after the initial 10.

Outside of these new features, the competitive Heroic Tavern Brawl is returning. This Tavern Brawl isn’t for casual players, though. The initial gold investment is as big as the tremendous rewards for a perfect 12 wins. It’s unknown at this time if this will be a Standard or Wild Brawl, or if a free ticket will be granted for players like the last Heroic Brawliseum gave.

You can try out all of these new features when the Scholomance Academy: The Forbidden Library event launches on Sept. 8.