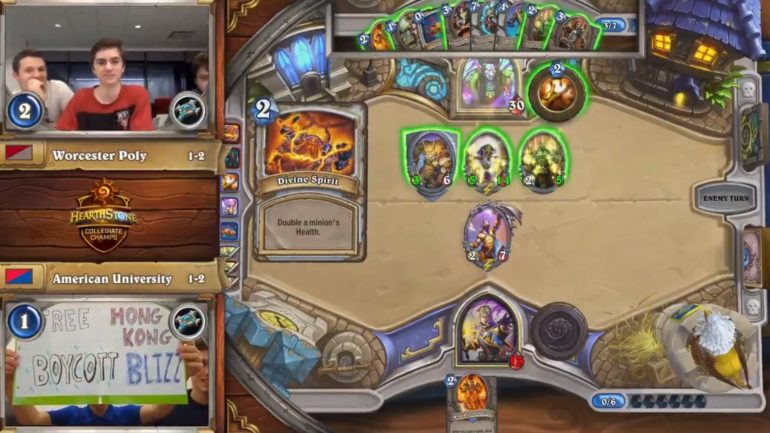 A collegiate Hearthstone team from American University decided to support Chung “Blitzchung” Ng Wai by holding up a sign that read “Free Hong Kong Boycott Blizz” during a tournament earlier this month. And now, they’ll receive the same punishment as him.

The team initially decided to forfeit the rest of their games because Blizzard didn’t penalize them for committing the same violation as Blitzchung. But AU student Casey “Xcelsior” Chambers tweeted Blizzard’s ruling of a six-month suspension today, commenting that he’s glad to be treated equally for violating the Collegiate Championship Official Rules.

“Happy to announce the AU Hearthstone team received a six month ban from competition,” Xcelsior said. “While delayed I appreciate all players being treated equally and no one being above the rules.”

Xcelsior said he expected the punishment, which was “cut and dry.” He simply wanted to face the same repercussions as the Hearthstone pro.

The AU Hearthstone team broke a Collegiate Championship rule on “Sportsmanship and Professionalism,” which asks participants to not perform any action that is “abusive, insulting, mocking, or disruptive.”

The ruling from Blizzard explained that it wasn’t the appropriate time and place for the team to make a statement on the Hong Kong protests.

“Every Voice Matters at Blizzard, and we strongly encourage everyone in our community to share their viewpoints in the many places available to express themselves,” Blizzard said. “However, the official broadcast needs to be about the game and the competition, and to be a place where all are welcome.”

The team will be permitted to participate in competitive Hearthstone tournaments at the end of their six-month ban on April 8, 2020.